That’s the catchphrase of Monty Hall, who hosted the iconic TV game show Let’s Make a Deal. Those words are reverberating around the globe right now.

An increase in mergers and acquisitions (M&As) is shaping up to be a major investment theme for the rest of 2021 and into 2022. History shows that shareholders typically benefit from M&As.

What’s more, firms are using M&A transactions as a way to counterbalance uncertainties, such as rising inflation, imminent Federal Reserve tapering, and a lingering pandemic.

Robust M&A reflects investor confidence. Corporate management and their deal sponsors feel good about the current economic and financial environment, prompting them to aggressively pursue new opportunities that better position them for the post-COVID world.

It also helps that the markets are awash in liquidity, thanks to the Fed. To be sure, the U.S. central bank is getting more hawkish, but interest rates are still scraping historic lows, which provides cheap debt-financing for aspiring acquirers.

Global M&A activity is smashing records so far this year, according to a new report by research firm Refinitiv.

In pre-market futures contracts Friday, the four U.S. indices were mixed amid reports of rising COVID rates in Europe. On the Continent, European stocks were sliding as COVID infections show a surprising uptick in countries such as Germany.

That said, U.S. and global indices have gotten a big lift over the course of 2021 by a surge in M&A deal-making. More than $5 trillion worth of M&A deals have been recorded so far this year (to November 17), already 40% more than the value recorded during the whole of last year and smashing the all-time full-year record of $4.2 trillion, recorded in 2015, by 19% (all values are in U.S. dollars). The following chart tells the story: 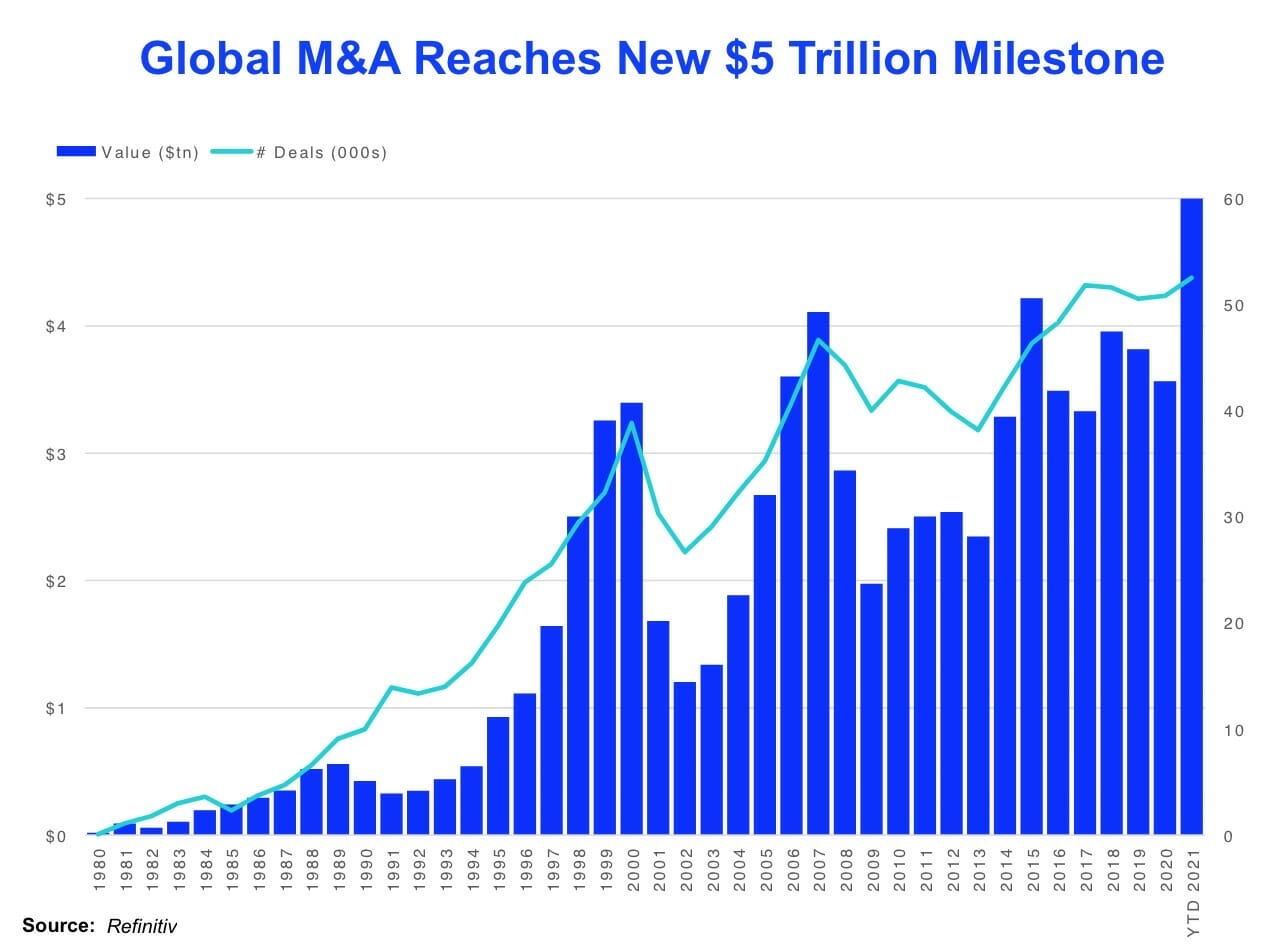 To date this year, the number of M&A deals announced around the world is at an all-time high of more than 52,000, 22% more than the 43,000 posted during the same period in 2020 and already more than any other full-year tally since records began in 1980.

The U.S. accounts for the lion’s share of this global M&A activity, with deals involving a U.S. target comprising 45% so far this year. China and the United Kingdom follow with 9% and 7%, respectively.

A record total of 154 so-called “mega-deals” (defined as each with a valuation of $5 billion or more) have been recorded so far during 2021, compared to 110 during all of 2020. The combined value of mega-deals exceeds $1.7 trillion to date in 2021, the highest level since 2015. A preponderance of these mega-deals have occurred among Silicon Valley stalwarts.

Indeed, the sector accounting for the largest portion of M&A deals globally is technology, at one-fifth. M&A activity focused on a tech target totals $989 billion so far during 2021, an all-time record and a whopping 94% year-over-year increase.

The run-up in stock prices this year, especially among Big Tech companies, has filled the coffers of corporate giants with huge piles of cash. Those companies are putting that money to work, by going on a shopping spree.

Many acquisition targets are smaller bargain-priced companies that can provide the acquiring company with new capabilities and markets. Big companies with deep pockets can simply buy new markets and innovations, by scooping up their smaller rivals.

This pursuit of innovation that’s integrated via M&A activity (a process known as “innogration”) has helped propel the Russell 2000 higher this year. Small caps also tend to thrive when investors are optimistic about economic growth.

The animal spirits of M&A activity bolster the bull case. Are you looking to profit from the current wave of bullishness, but with reduced risk? Consider the expertise of my colleague Jim Fink.

As chief investment strategist of Velocity Trader, Jim Fink has devised trading methodologies that reap market-beating gains, regardless of economic ups and downs.

Jim has put together a new presentation that shows smart investors how to make massive investment gains in a short amount of time. Click here now for access.