I went to Costco (NSDQ: COST) over the weekend and my bill was twice the normal amount, although I only bought a few extra things. And, yes, I’ll admit it, since I live in Texas, I bought a few extraordinary items in preparation for a potential redux of the nearly catastrophic electric grid failure from earlier in 2021.

But here’s the thing; the place was packed. Moreover, it seemed as if everyone else was doing the same thing. For example, I didn’t see that many turkeys or holiday treats being bought. Mostly people seemed to be buying non-holiday items.

All of which makes me wonder what the holiday season may be like this year, especially when the number of COVID cases seems to be on the rise, and of course with the Federal Reserve prepping its quantitative easing (QE ) tapering starting in December.

The holiday season is often where retailers make their biggest profits. And why not? It’s the time of year when consumers are often more willing to part with their cash than during other seasons. Of course, at the moment, cash seems to be evaporating at a more rapid pace than in the recent past due to inflation.

But hey, the retail industry’s expectations have certainly been lofty with the National Retail Federation projecting all-time highs in holiday spending to the tune of as much as $859 billion in sales. And given the rally in retail stocks over the last few weeks, investors are all in on the notion that holiday shopping will be bigger than ever.

All the same, there may be more to what’s going on than meets the eye.

For example, the Van Eck Vectors Retail ETF (RTH) has been on a stratospheric run. But inside RTH, the action is a bit uneven, as many of its holdings are in major momentum runs while others are singing different tunes. 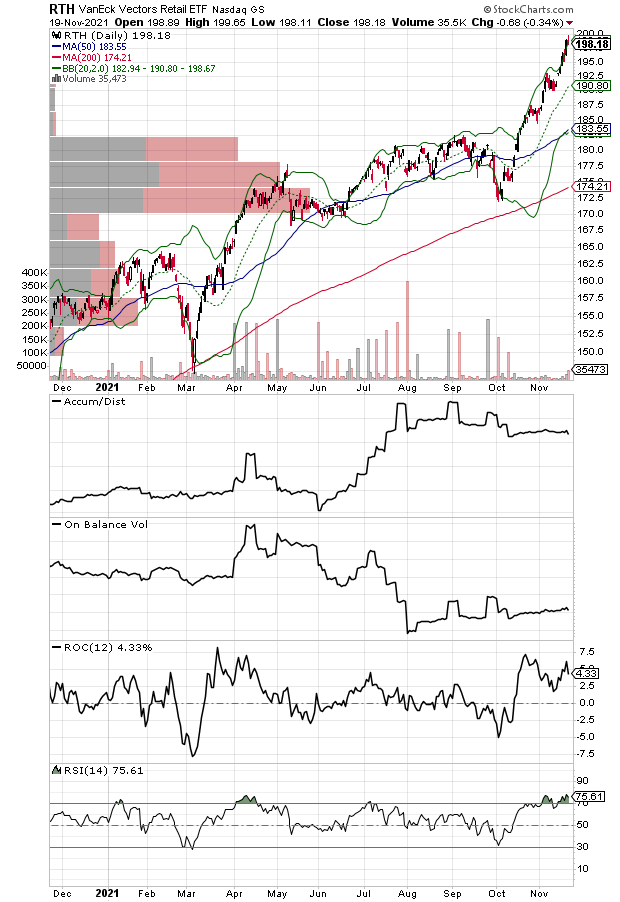 On the bullish side, stocks which have had big runs include Dollar Tree (NSDQ: DLTR), Home Depot (NYSE: HD), and Best Buy (NYSE: BBY).

Perhaps more telling, the retail stock which has not had a big run is Walmart (WMT). Specifically, WMT’s stock has languished despite a better-than-expected recent earnings report. The company beat expectations on earnings, and showed healthy growth rates across the board, especially in the increasingly important e-commerce category. Meanwhile the company offered very upbeat positive guidance for the holiday season. 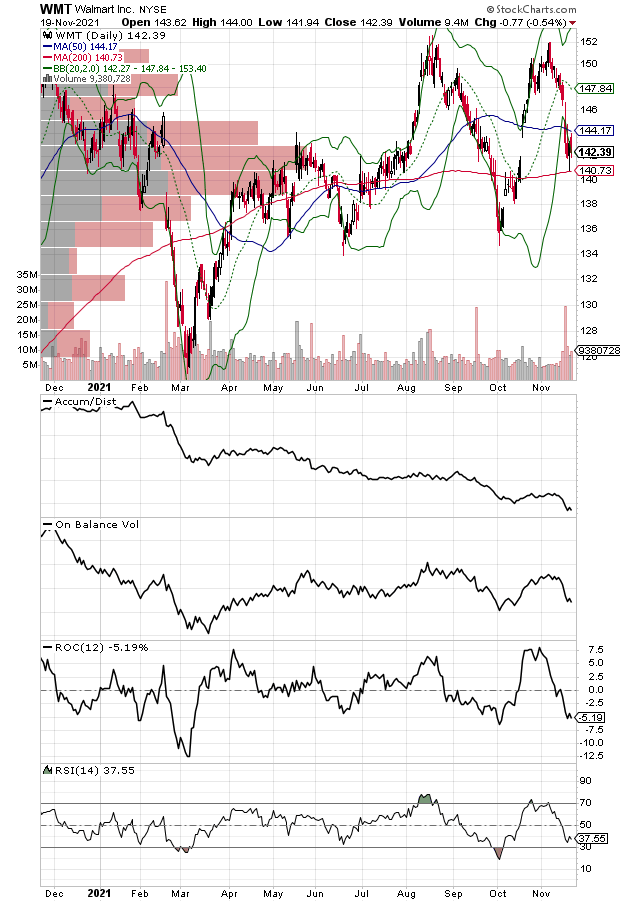 Usually, this type of a report would be a signal to investors to pile into the stock. Yet, WMT shares are stuck in a rut with the post report gains fading within hours. In addition, Walmart’s CEO was downright giddy noting:

“There’s a level of excitement in the air. You can feel it. I’ve been walking away from these stores with a recurring thought, ‘We’re ready, we have the people, the products, and the prices to deliver a great holiday season.’ ”

So what gives? The CEO is ecstatic and the stock goes nowhere.

Well, perhaps investors are wary of Walmart’s penchant for sacrificing margins in order to grab all the market share that it possibly can. And the CEO’s assertion that the company “loves to fight inflation” may play well with its customer base, but may not be a good thing for the stock. 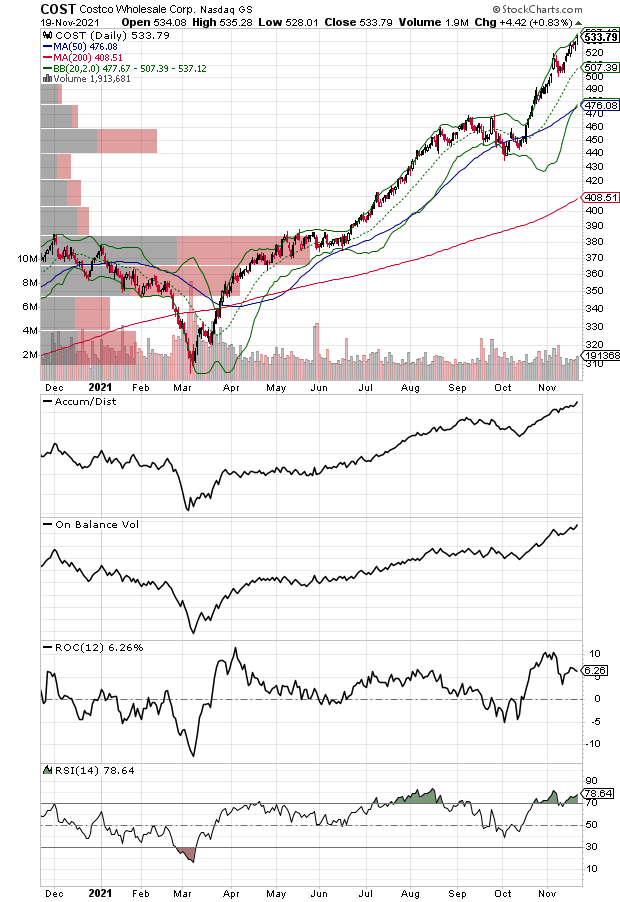 On the other hand, Costco (NSDQ: COST), thanks to its ability and willingness to pass costs on to the customer (Ouch!), is breaking out to new highs on a regular basis, as it focuses on profits, not discounting.

Walmart Is a Victim of its Own Success

So what’s the bottom line?

Inflation is rising more aggressively at the retail level than the consumer price index (CPI) indicates. I learned this the hard way on my recent trip to Costco. And while on Main Street higher prices hurt, on Wall Street it looks as investors are betting on Costco over Walmart.

That’s because Costco seems to be having little trouble, at least for now, in passing its higher costs through more efficiently than Walmart, whose Sam’s Club is only part of its overall discount heavy business. Even if Walmart captures rising costs well at Sam’s, the company still has to discount prices heavily at its Walmart Super Stores and related brands.

Costco is having less trouble passing costs onto its customers because of more leeway with its suppliers, whereas WMT may in the future run into problems when it squeezes its own supply chain to keep its discounts in place.

Editor’s Note: Are you looking for fast investment growth, with less risk? Consider our colleague, Jim Fink. As chief strategist of the premium trading service Velocity Trader, Jim has devised investing methodologies that make money in up or down markets, regardless of how inflation behaves.

Jim Fink has put together a new presentation that shows smart investors how to earn massive gains in a short amount of time. Click here for free access.