Germany is poised to become the new European capital of marijuana. More about that, in a minute. First, it’s important to understand the growth of black market weed and Germany’s place in this illicit trade.

Use of a psychotropic substance such as marijuana is clearly an individual’s decision. However, the prevailing drug subcultures and each person’s place relative to them also impart a significance to the activity.

Put another way, the rebellion inherent in using an illicit substance is, for many marijuana users, part of the allure. That’s why, despite the increasing pervasiveness of legalization, many users bypass government-sanctioned dispensaries and other legal sources, to procure weed on the black market.

Black market cannabis also tends to be cheaper, because it evades taxes and regulation. That also means illicit weed is less safe. For investors, this complex socio-economic context underscores the lingering riskiness of the marijuana sector. You need to pick quality stocks in the cannabis sector. (Below, I steer you in the right direction.)

In a report released November 29, the research firm New Frontier Data examined the growth of illicit marijuana sales in Germany as a case study of the world’s growing black market for marijuana. The following chart frames the issue in stark terms: 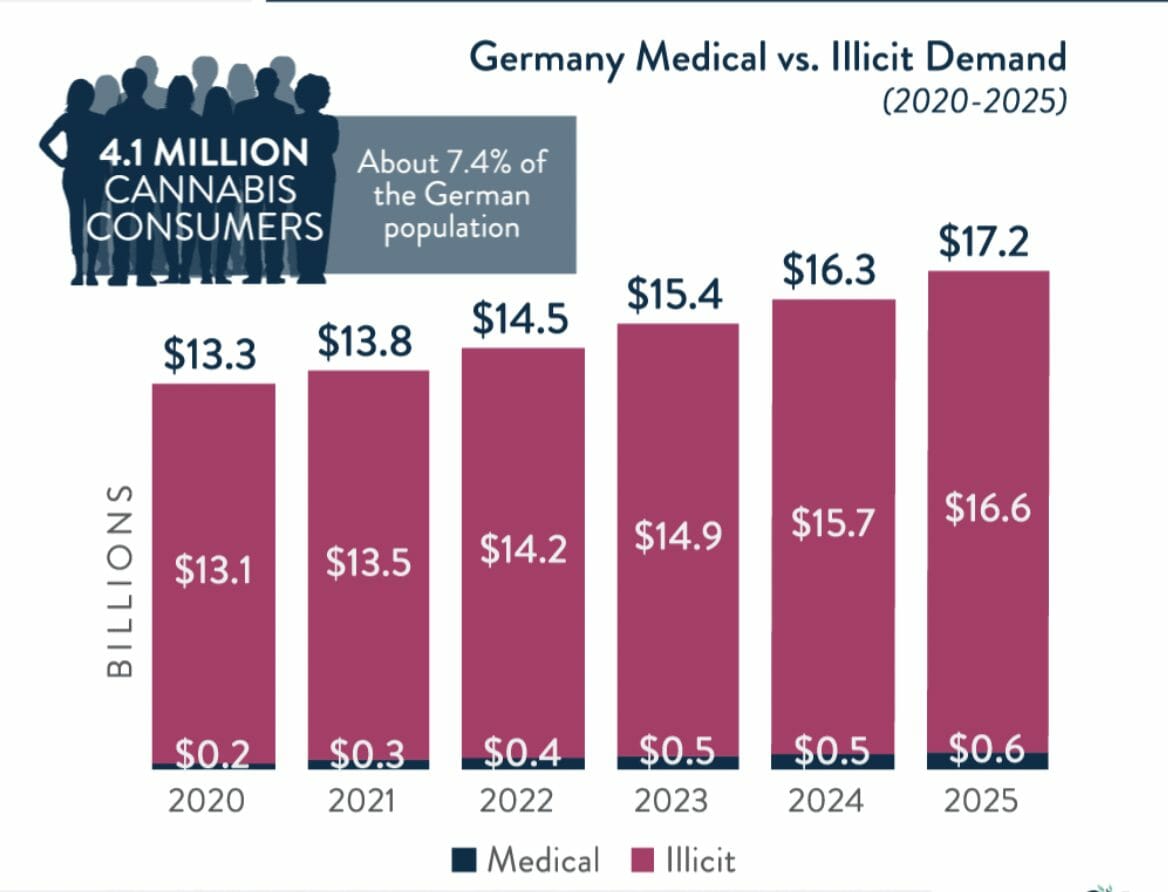 Germany is the largest economy in the European Union and the growth engine of the Continent. Medical cannabis has been legal in Germany since 2017. Private recreational use of the drug is banned, although law enforcement tends to turn a blind eye towards small amounts.

Germans account for 17% of total European demand, and 3% of global demand. Those are disproportionately high percentages. Now that Germany has elected a new center-left coalition government, efforts are underway to legalize recreational marijuana in the country.

The center-left SPD, Greens, and liberal FDP have agreed to ease rules on the personal recreational use of cannabis. The three parties stated in their coalition contract, published this month: “We will introduce the controlled distribution of cannabis to adults for consumption purposes in licensed stores. This will control the quality, prevent the circulation of contaminated substances and ensure the protection of minors.”

If recreational legalization occurs in Germany (and odds are good that it will), the ripple effects throughout Europe would be profound, providing a profitable catalyst for the industry’s growth on a global basis.

The European cannabis market is forecast to grow at a compound annual growth rate of 67.4% to reach 3.2 billion euros ($3.75 billion) by 2025, according to a recent report from the research group Prohibition Partners.

In addition to its position as a business and financial powerhouse, Germany’s capital of Berlin has evolved into the hip cultural center of Europe. The city could be on the verge of becoming Europe’s marijuana hub, too.

A growing number of countries in Europe have decriminalized possession of small amounts of cannabis, making marijuana easily obtainable across the Continent.

Regardless of respective laws and regulations, social attitudes in Europe toward marijuana are tolerant. When police see ordinary people imbibe marijuana, the typical response of the cops is (to quote a famous Monty Python sketch) nudge-nudge, wink-wink.

In Europe, North America, and elsewhere around the world, obstacles remain to marijuana sales in jurisdictions even where weed is legal, notably red tape and slow-moving bureaucracies. Hence the widespread reliance on illegal pot. Just because something is technically legal doesn’t mean officials are expediting its use.

State taxes on marijuana are soaring in the U.S., which in turn is driving up weed prices. This dynamic is proving a headwind for the above-board marijuana industry, because it makes legal pot less affordable, hurts company margins, and fuels a rising black market.

The legalization of cannabis is one of the greatest investment opportunities in a generation. However, when the news is out about an industry’s good fortunes, the rest of the investment herd piles in. Risky and even fraudulent stocks proliferate. Some investors make a fortune; others lose their shirts.

Every portfolio should have exposure to the marijuana industry. The good news is, the investment team at Investing Daily has done the homework for our followers. To learn about our favorite marijuana plays, click here now.

Questions about investing in marijuana? Drop me a line: mailbag@investingdaily.com.