Regular readers of this column know that I am fascinated by the trading activity surrounding Carnival Corp. (NYSE: CCL). That because the cruise ship operator headquartered in Miami is especially vulnerable to the vagaries of the coronavirus pandemic.

Prior to the emergence of COVID-19 two years ago, CCL was trading above $50. Three months later it fell below $10 when the pandemic shut down the cruise industry.

By the end of last year, CCL had climbed back above $21. At that time, several successful vaccine candidates for the virus had been confirmed and would soon be distributed.

As a result, the stock market recovered faster than expected. Over the first 11 months of this year, the SPDR S&P 500 Trust (SPY) was up more than 22%. 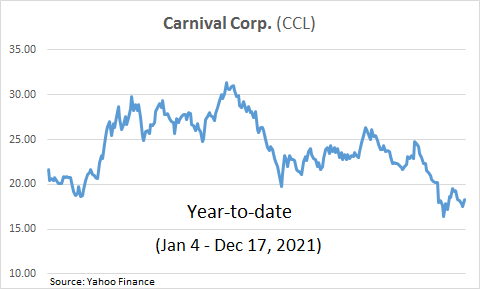 The news was not so good for the cruise industry. Over the same span, CCL lost 19%. And that was before the first case of the Omicron variant of COVID-19 was confirmed in the United States.

Over the first ten days of December, the 7-day average daily case count for COVID-19 in the United States increased by 46%. Nobody knows where and when it will top out, but it most likely will continue to rise in the weeks to come.

Now that Omicron is here and is spreading rapidly, the outlook for Carnival is once again uncertain. Even though Florida is allowing cruise ships to come and go as scheduled, other parts of the world are taking a hard stance against tourism until Omicron is brought under control.

On December 20, Carnival reported that total revenue for its fiscal fourth quarter (ended November 30) was $1.29 billion, less than the $1.41 billion that analysts were expecting. In addition, the company acknowledged that Omicron was having a deleterious effect on this quarter’s revenue, too.

Buried beneath a litany of optimistic statements in the press release accompanying those results was this ominous statement: “Over the last few weeks, we have experienced an initial impact on bookings related to near-term sailings as a result of the Omicron variant.” However, the company was quick to point out, “Cumulative advanced bookings for the second half of 2022 and first half of 2023 are at the higher end of historical ranges.”

Carnival also glossed over the fact that its monthly “cash burn rate” during the quarter was $510 million. It did not state what the burn rate might be going forward, but the company did say that it “expects a net loss for the first half of 2022 and a profit for the second half of 2022 on both a U.S. GAAP (generally accepted accounting principles) and adjusted basis for both periods.”

That would be quite a turnaround for a company that reported over $20 billion of negative net income over the past two years. To accomplish that objective, Carnival predicts that 100% of its berth capacity will be in service by this June and remain at the level thereafter.

I hope for Carnival’s sake that it is correct in its forecast for the year to come. One more year like that past two and the company could be forced into bankruptcy.

That creates a compelling investment opportunity. By this summer, we should know if Carnival is going to make good on those promises.

For that reason, I believe that an options straddle is the best way to profit from Carnival’s uncertain future. A straddle entails buying both a put and a call option on the same underlying security with the same strike price and expiration date.

Last week while CCL was trading near $18, the put option that expires on July 15 at the $17.50 strike price could be bought for $3. At the same time, the call option with the same strike price and expiration date could be purchased for $4.

For that trade to be profitable, CCL would have to move at least $7 away from that strike price within the next seven months. That means it must fall below $10.50 or rise above $24.50.

If Carnival ends up declaring bankruptcy, then its share price would drop precipitously. In fact, CCL may have no value at all given the company’s heavy debt load. Under that scenario, the stock could be worth zero.

But if Carnival can resume full operations by this summer then its share price could soar above the $30 level where it was trading less than seven months ago.

Either way, the net return on this trade could exceed 100% if the company’s long-term fate becomes apparent over the first half of 2022. If it does not, then there is the risk that both of these options could expire with no value.

If that’s more risk than you’d like, I suggest you take a look at what my colleague Jim Fink has been able to accomplish using his proprietary trading methodologies. Jim can show you how to bank winning trades up to 18x better than what most investors see, in the next 12 months alone. Click here to view his latest presentation.