The Marijuana Megatrends of 2022

The War on Drugs is over. Drugs won.

Consider marijuana, the editorial focus of Marijuana Investing Daily. It seems hard to believe, but a decade ago, no U.S. states allowed marijuana for recreational use. None!

Today, marijuana is legal for recreational use in 18 states and the District of Columbia, and for medical use in 36 states and DC. More states are getting ready to follow suit, to one degree or another. At the same time, bills are pending in Congress to lift federal restrictions against weed.

One of the surest ways to generate investment profits is to pinpoint megatrends in certain industries that will unfold, regardless of temporary headwinds. An industry that stands out for its multi-year momentum is marijuana.

Demand for once-vilified cannabis is sufficiently entrenched to withstand rising inflation, higher interest rates, the coronavirus pandemic, and other risks that threaten many other sectors. Indeed, marijuana has evolved from culture war flash point to “essential service.”

Let’s see what 2022 (and beyond) has in store for marijuana, as a consumer product and investment destination.

North America is the growth engine of the global cannabis economy, currently accounting for 97% of legal cannabis sales. The region’s influence will only grow stronger in 2022. The legal market opportunity in the U.S. alone will account for a disproportionate share of global demand (see chart). 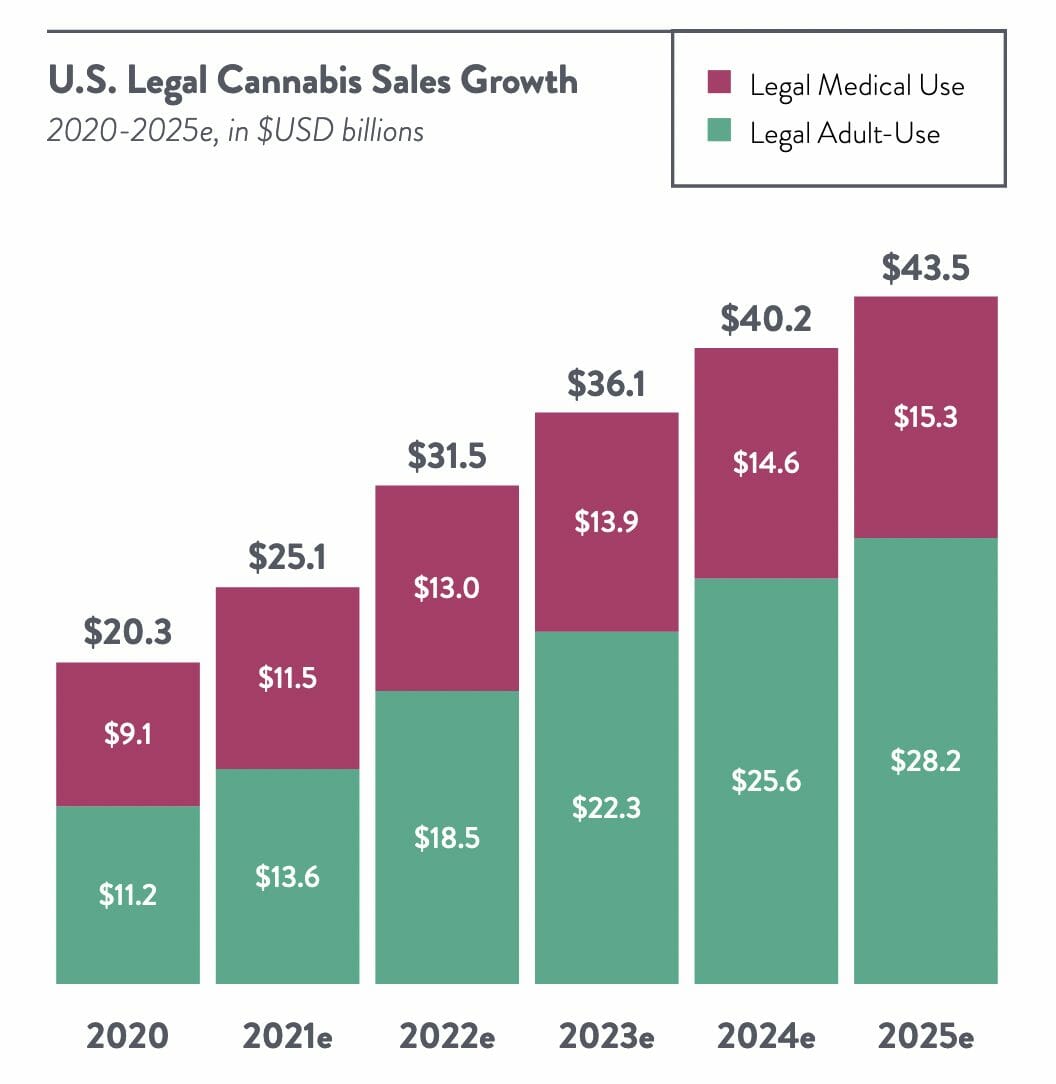 “Despite federal prohibition, cannabis legalization at the state level has been growing in momentum, and cannabis use in the U.S. is so widespread at the municipal level that it is increasingly becoming decriminalized for personal possession or use.

As a result, not only do Americans hold recently liberalized views on cannabis legalization — a Gallup poll found 68% nationwide believe that it should be legal —the country has also led the world in cannabis innovation as states have developed independent markets, with the creation of new genetics, cultivation techniques, derivative products, ingestion and distribution methods, and curated consumer experiences.”

Canada legalized marijuana on the federal level in 2018. Domestic sales of legal cannabis in the Great White North totaled $2.57 billion for 2020 and they’re projected to reach $5.5 billion by 2025.

Canada this year will continue to trail the U.S. in terms of total domestic retail sales of cannabis, but the Great White North will remain the world’s leading cannabis exporter through 2025, with limited partnerships spread across 20 countries worldwide.

Europe is another major regional player in the marijuana market. Germany is home to the largest medical cannabis program in Europe, while other markets (e.g., Italy, Spain, the Netherlands, and the United Kingdom) are working to lift restrictions.

Germany is the largest economy in the European Union. The country’s new government pledges to legalize marijuana this year, an event that would catalyze pot reform throughout the Continent.

Legalization also is gaining traction in Latin America, with efforts underway in major markets such as Mexico. Marijuana demand is burgeoning around the world, with many billions of dollars at stake (see chart): 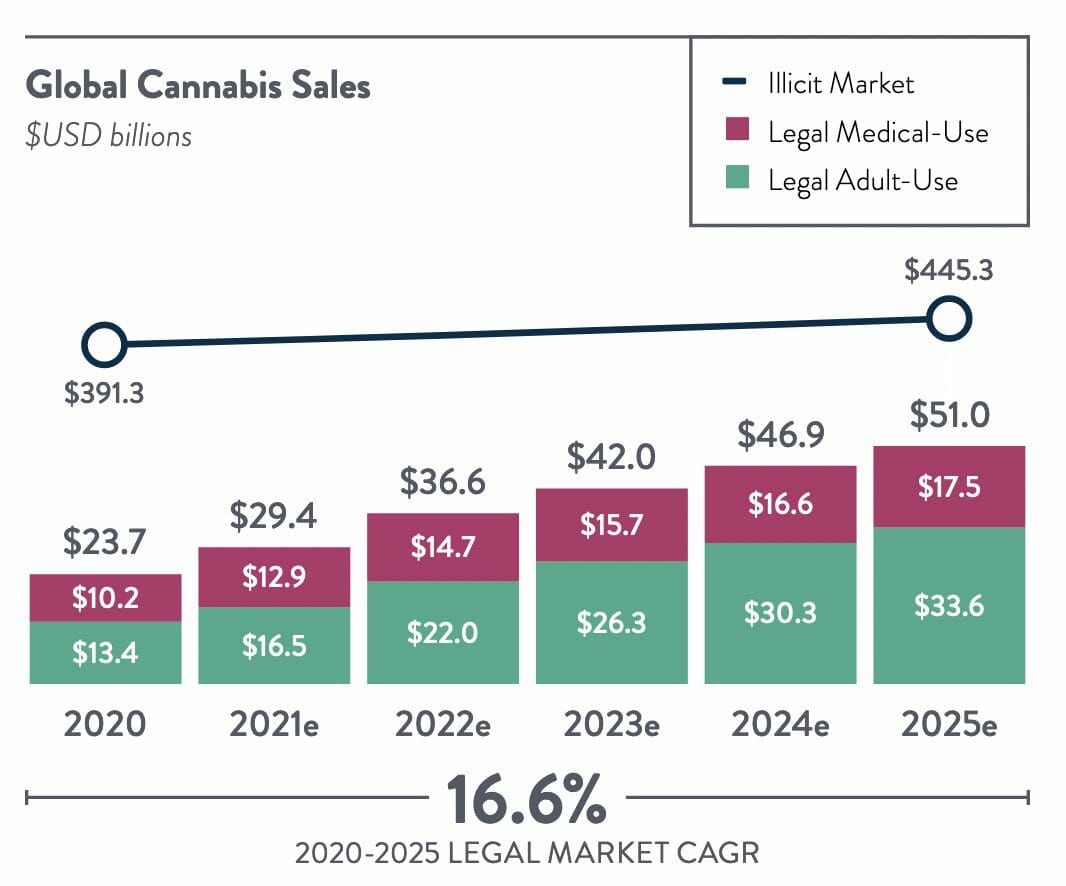 The global scope of cannabis legalization is attracting unprecedented levels of capital, to fund start-ups and mergers and acquisitions, to expand existing operations, and to acquire novel intellectual property. According to New Frontier Data, this trend is set to accelerate in 2022.

When will the U.S. Congress finally legalize marijuana on the federal level? It’s difficult to pinpoint the timing, especially in the context of bitter political polarization.

However, federal legalization in the U.S. seems inevitable due to the confluence of three unstoppable factors: 1) wider legalization on the state level; 2) growing use and social acceptance; and 3) the mainstreaming of marijuana as a multi-billion-dollar business (with subsequent job generation and tax revenue).

I’ve just described trends that are creating powerful tailwinds in 2022 and beyond for publicly traded marijuana companies. Looking for the best ways to profit? Click here for our free report.