The World Needs These Firms to Avert an Energy Crisis

Tensions between the West, with Ukraine as proxy, and Russia turned into an invasion and that’s helped drive oil prices over $100 for the first time since 2014.

As you may remember, the oil market then crashed. The price decline, in addition to the long-term outlook of reduced gasoline demand due to electric vehicles, caused a major industry-wide cutback in capital spending.

Capex dropped from nearly $700 billion a year in 2014 to under $300 billion in 2020. Not surprisingly, global oil reserves peaked in 2018, and have incrementally declined every year since. Due to the budget cuts, it’s unlikely reserves will have much upside unless capex increases significantly.

On the demand side, although oil prices briefly fell into negative territory as the global COVID lockdown in 2020 caused unprecedented uncertainty, now the demand for fossil fuels is far exceeding expectations. It’s projected to increase over the next five years and likely longer term as well.

The only component of oil demand not expected to increase is gasoline, which accounts for about 25% of worldwide oil demand.

While the Russia-Ukraine conflict has resulted in a temporary spike in oil prices, even without the crisis, I believe oil prices were trending upward over time anyway.

Clearly, oil and gas producers benefit from the jump in prices since they will be able to sell their output at higher prices. But there is a group of energy companies that were battered by the oil market crash that investors should also keep in mind.

These companies are the oil and gas service companies. They provide the products and services that help the producers extract their reserves from the ground (or from under water). They provide the rigs and drilling services, or the technology and consulting to plan out optimal ways of extracting the petroleum.

The chart below shows how the SPDR S&P Oil & Gas Exploration & Production ETF (XOP), an exchange-traded fund of oil and gas exploration and producers, has fared compared to the VanEck Oil Services ETF (OIH), which tracks oil and gas service companies: 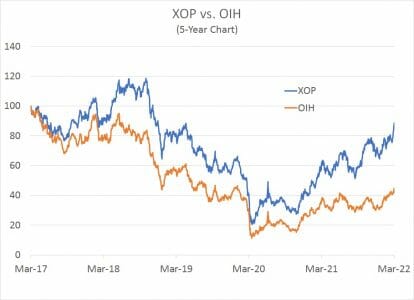 However, capex cannot remain low forever. Experts say that without higher capital spending, oil production could fall by 30 million barrels a day over the next decade.

This means that without substantial gains in capital expenditures, the world is headed for an energy crisis that would spark severe worldwide recession combined with a massive uptick in inflation, an outcome that would dwarf even the 2008 debacle. Even though inflation has reached the highest level since the early 1980s in the U.S., things will get much worse if we have an energy crisis.

Thus, while the service company stocks have lagged, they should not be forgotten, especially the dominant players. They will be among the biggest beneficiaries of the coming oil boom.