Is Global Shipping Poised to Capsize?

If I were compiling a list of undesirable traits of companies to invest in during the current economic environment, it would include:

That’s why I was surprised to receive an invitation last week to listen to what amounted to a sales pitch for investing in the shipping industry. In addition to the problems cited above, it also suffers from a huge increase in the cost of steel used to build these behemoths.

With respect to my first bullet point, container ships require massive amounts of fuel. According to one industry source, “A Panamax container ship can consume 63,000 gallons of marine fuel per day” at speeds ranging between 20 and 25 knots per hour (cruising speed).

Since the start of this year, the price of diesel fuel has increased by more than a third. Multiply that times 63,000 gallons per day and it adds up fast! 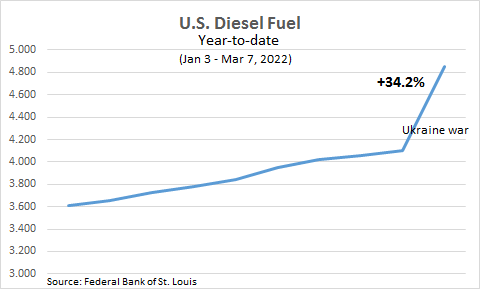 As for using leverage, consider the world’s largest publicly-traded shipping company, Maersk (OTC: AMKBY). It carries a debt/equity ratio of 33.6 compared to a multiple of 1.5 for the S&P 500 Index.

Even worse, much of that debt is in the form of credit lines with adjustable interest rates. As the Federal Reserve starts raising short-term rates this month, the cost of that debt will increase proportionately.

Of course, the shipping industry is a critical component of the global supply chain. It is dependent on manufacturers for a steady source of commerce.

In turn, those manufacturers are dependent on their suppliers for the materials necessary to produce their goods. If they have to reduce or halt production due to resource scarcity, there is less to ship out.

From Sea to Sky

Despite my misgivings, I was intrigued by the counterargument made by the sponsor of the U.S. Global Sea to Sky Cargo ETF (SEA). To hear them tell it, rising oil prices and war in Ukraine are good for the shipping business.

Read This Story: Scrutiny on the Bounty

As their logic goes, higher oil prices mean the tankers that ship it overseas can charge more for that service. And since they have to carry it a greater distance to compensate for the oil sanctions recently imposed on Russia by the United States and Great Britain, those routes will become even more profitable.

I’m not so sure I agree with all that. Yes, oil prices are higher than they have been in a long time, which means oil producers can afford to spend more to ship it.

However, the conditions contributing to very high oil prices could dissipate over the remainder of this year. Eventually, the conflict in Ukraine will be resolved. Until then, OPEC may increase production to alleviate regional demand pressures.

And if the logic above is true, then that’s bad news for shippers since lower oil prices mean they can’t charge as much to move it.

Regardless of which way oil prices go, there is no doubt that interest rates are headed higher. As soon as this week, the Fed may begin ratcheting up short-term interest rates which would directly impact the global debt markets.

There also is little doubt that commodity prices are headed up. Inflation is running hot, as evinced by last week’s 7.8% annual increase in the Consumer Price Index for All Urban Consumers (CPI-U).

At some point, the combination of higher retail prices and increased borrowing costs will suppress demand for goods. The American consumer has come through like a champ throughout the coronavirus pandemic, but may soon be tapped out.

That’s why I am avoiding the shipping industry at the moment. Through no fault of their own, global shippers find themselves in the crosshairs of several macroeconomic megatrends that could all soon move against them.

For that reason, I am focusing on businesses that will not be adversely impacted by those same megatrends. That is to say, companies that do not consume a lot of energy, don’t have too much debt, and are not overly dependent on the global supply chain.

That is essentially the definition of the service sector, which sells activities performed instead of tangible goods. As a result, it is highly adaptable and can adjust pricing quickly in response to market conditions.

To the best of my knowledge, there is not yet an exchange-traded fund that focuses solely on the service sector. Perhaps the sponsors of SEA should create such a fund in case the shipping industry starts sinking.

Editor’s Note: Jim Pearce just provided you with invaluable investment advice. You should also consider the expertise of our colleague Jim Fink.

Jim Fink is chief investment strategist of the elite trading services Options For Income, Velocity Trader, and Jim Fink’s Inner Circle. He has agreed to show 150 smart investors how his “paragon” trading system could help them earn 1,000% gains in just 12 months. We’ve put together a new presentation to explain how it works. Click here to watch.