To quote Mick Jagger, I’ve been around for a long, long year. I’ve covered politics as a newspaper reporter, I’ve worked on Capitol Hill as a staffer, and I’ve even served on political campaigns. And from my decades of experience in politics, here’s a major lesson that I’ve learned: most politicians are liars.

Last Sunday, I was dismayed to hear the same old malarky about energy on the TV news gabfests. One resilient lie is the notion that governmental green policies have dampened energy production, jacked up oil and natural gas prices, and thereby boosted inflation. This argument is bogus. It’s being wielded as a partisan bludgeon, with an eye on the midterms.

Policies in the U.S. and other countries designed to encourage renewable energy and fight climate change are not sufficient to significantly drive-up crude oil and gas prices and by extension prices at the gasoline pump. Regardless, in the article below, I’ll show you a way to profit from inflation.

Perhaps the most egregious falsehoods stem from the canceled Keystone XL pipeline. Keystone would have expanded an existing system transporting oil from Canada to the Gulf Coast. Keystone was shut down by the White House because of its potential harm to the environment.

Despite the demagoguery you may be hearing about Keystone, the fact is that Keystone has never been operational and was less than 10% completed when it was shut down. It would have taken years for the pipeline to have any impact on gasoline prices.

Moreover, even if Keystone XL were filled with fully additional Canadian export capacity (an improbable scenario), this supply from the Canadian tar sands would have exerted a negligible effect on global oil markets.

Over the past 18 months, the per-barrel price of West Texas Intermediate, the U.S. benchmark, has roughly tripled. Greater production would help bring down the price of crude and hence gasoline. But no one is tying the hands of the oil industry.

Oil companies are free to produce more oil whenever they want. According to the latest Bureau of Land Management data, the oil industry already owns more than 9,000 approved but unused drilling permits on federal lands. Nearly 5,000 of those permits were approved in 2021 alone, the highest figure since the fossil fuel-friendly administration of Texas oil man George W. Bush.

Arguments that inflation is fueled by corporate greed are specious as well. Sporadic profiteering is indeed occurring, but for the most part, companies are hiking prices because their costs are rising.

Here’s the truth behind higher energy prices. During the worst of the pandemic, energy companies reduced production because of plummeting demand. Then, the rapid economic recovery increased energy demand beyond production capacity. The military conflict in Ukraine added supply disruptions, which in turn have been exacerbated by Western sanctions against Russia’s war in Ukraine.

Blame the global pandemic and the war in Eastern Europe for high gasoline prices. History shows that presidential administrations, whether Democratic or Republican, can do little to affect prices at the pump.

The big question for investors: as energy costs rise, will inflation get out of control and cause a global recession? My expectation is that rising inflation will slow growth, but neither kill the recovery nor crash the stock market. At least over the short term, though, equities are in for a rough patch (see table). 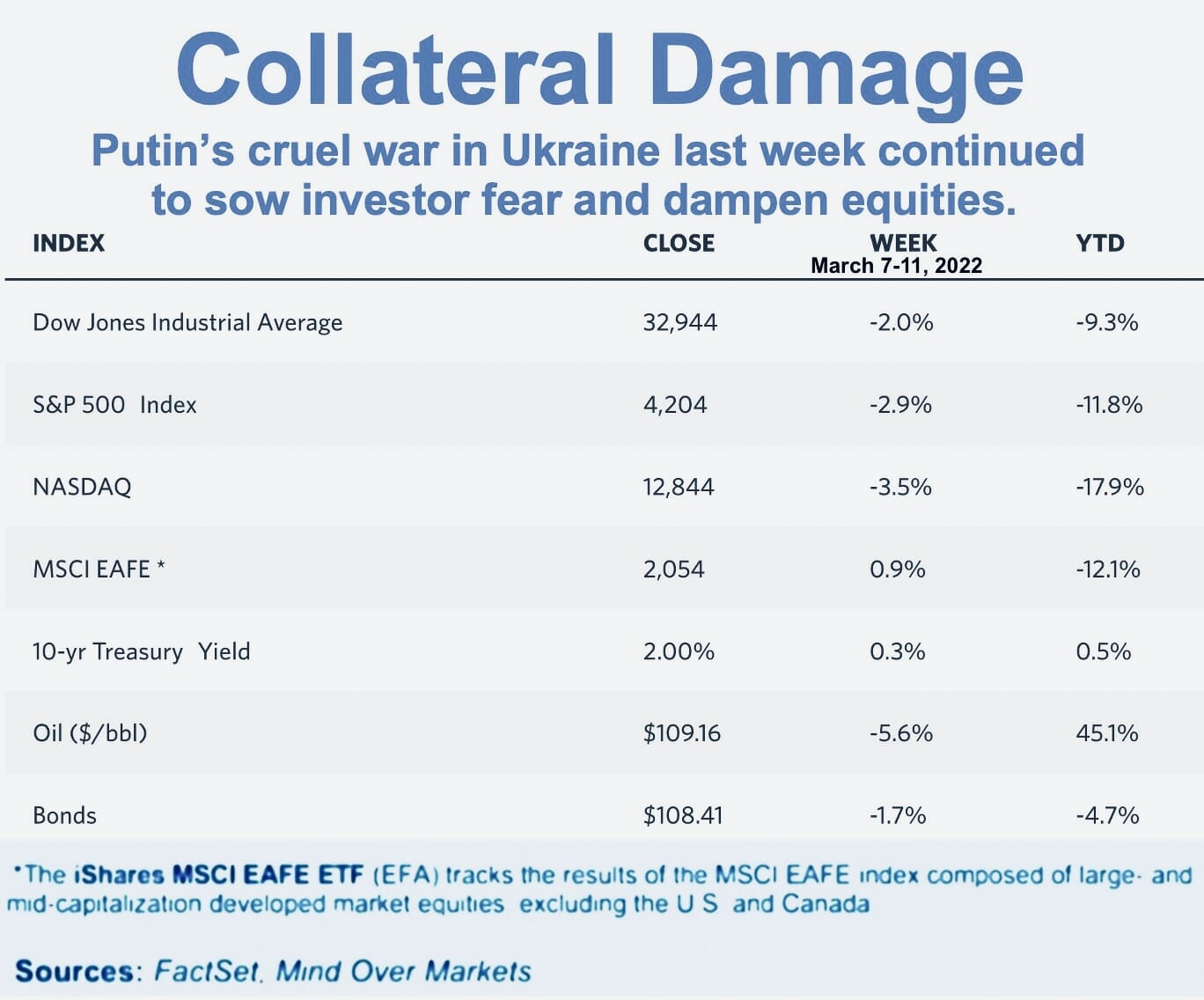 Last week, the Bureau of Labor Statistics (BLS) reported that in February, the Consumer Price Index (CPI) for All Urban Consumers rose 0.8% month-over-month, seasonally adjusted, and rose 7.9% over the last 12 months, not seasonally adjusted. The yearly rise represented a 40-year high.

The Russia-Ukraine crisis has worsened inflation by pushing up prices for oil and gas, wheat and other grains, and crucial raw materials such as copper, iron ore, lithium, and aluminum. (More about copper, in a minute.)

That said, if the war in Eastern Europe abates, we could witness an easing of these inflationary pressures. Energy prices would pullback, especially if supply-and-demand is restored to greater equilibrium. Federal Reserve tightening should also cool off the inflationary fires.

In the meantime, pain at the pump is acute. The following graphic tells the story: 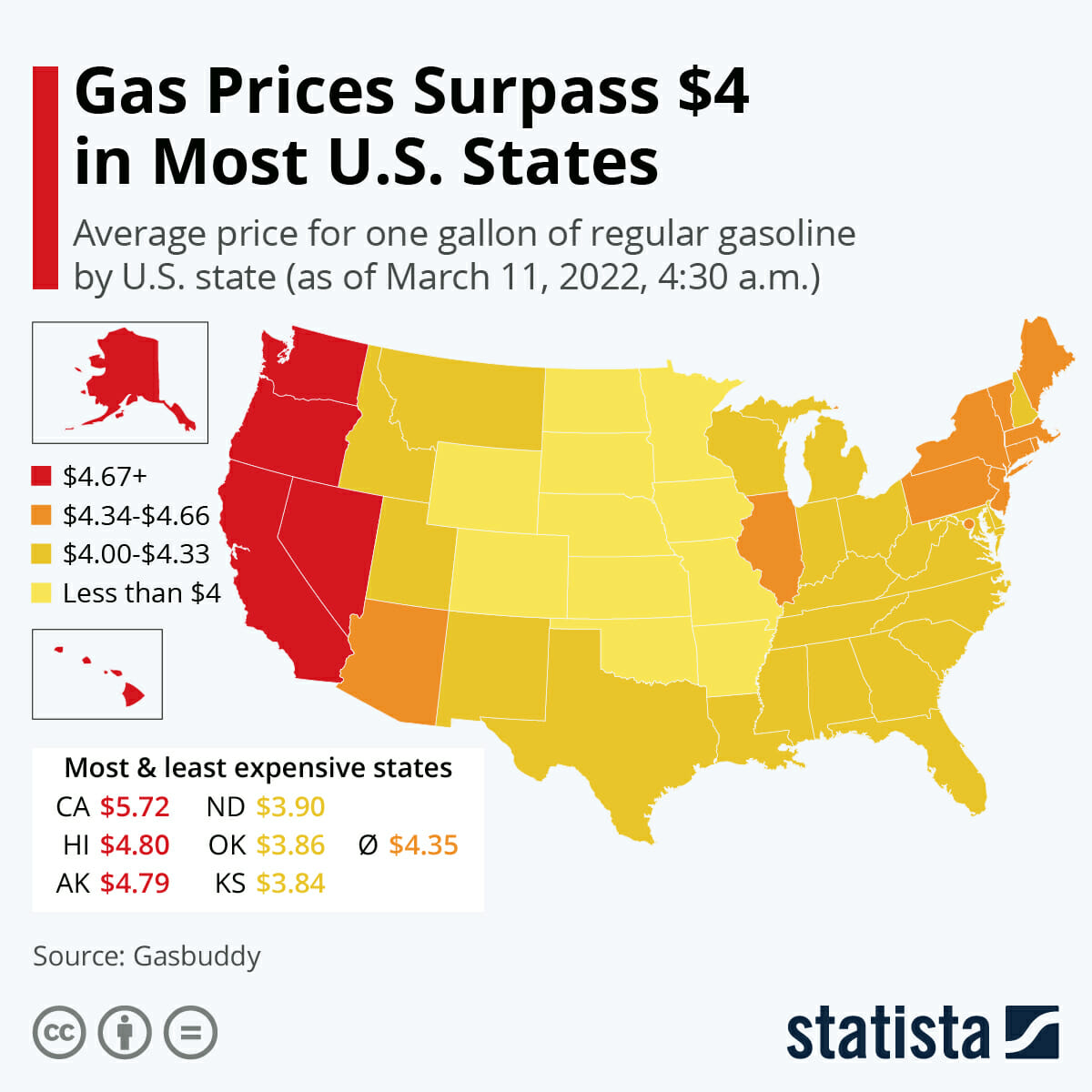 Before the Russia-Ukraine war broke out, U.S. economic growth was projected to hover in the range of 4.0%, well above the historical performance that’s closer to 2.0%. Although rising crude oil prices weigh on growth, it’s still unlikely that we’ll lapse into recession or even worse, stagflation.

As the Omicron variant fades, retail sales, personal consumption, and employment data have all exceeded expectations.

Another positive factor: China’s economy, the global growth engine, has held its own and it’s expected to outperform again in 2022.

Watch This Video: China, Power Politics, and Your Money

Europe appears the most vulnerable. About 40% of Europe’s natural gas comes from Russia. However, the coming of spring should alleviate at least some of the energy pressure on the Continent.

Under these conditions, increasing your exposure to hard assets and raw materials is a shrewd way to simultaneously tap growth and insulate against inflation. One of the world’s most vital commodities is copper.

John Persinos is the editorial director of Investing Daily. Opinions or questions about energy prices? Contact me at: mailbag@investingdaily.com.