For The Markets, Powell Outranks Putin

When in 1935, an advisor warned Russian dictator Joseph Stalin of the power of the Pope, Stalin dismissively answered: “How many divisions does he have?”

In recent weeks, Vladimir Putin, a latter-day Stalin, has been roiling markets with his invasion of Ukraine. But the latest policy decisions of the Federal Reserve are superseding worries about Putin’s military moves. Like the sovereign of the Catholic Church, the head of the U.S. central bank wields enormous global power, without a military.

Let’s examine the start of the tightening cycle by the U.S. central bank, how the markets have responded, and what it all portends in the coming months.

The economic recovery is on track, albeit threatened by the Russia-Ukraine war, and extraordinary stimulus is no longer required. Indeed, inflation is running hot. After two years of keeping borrowing costs near zero, the Fed last week finally took its long-anticipated step toward monetary normalization.

The Fed’s announced 0.25% rate hike was the first since 2018 and probably the first in a series of hikes over the next two years.

Powell indicated that when the Fed’s tightening cycle has ended, rates are likely to be as high as 2.8%. But the Fed’s hawkish pivot has no pre-established path. Rate hikes, and along with them Wall Street’s expectations of Fed moves, will vacillate according to incoming data about economic growth and inflation.

Powell’s prudent course so far has calmed frayed nerves among investors and taken the spotlight away, at least temporarily, from mercurial strongman Putin (see table). 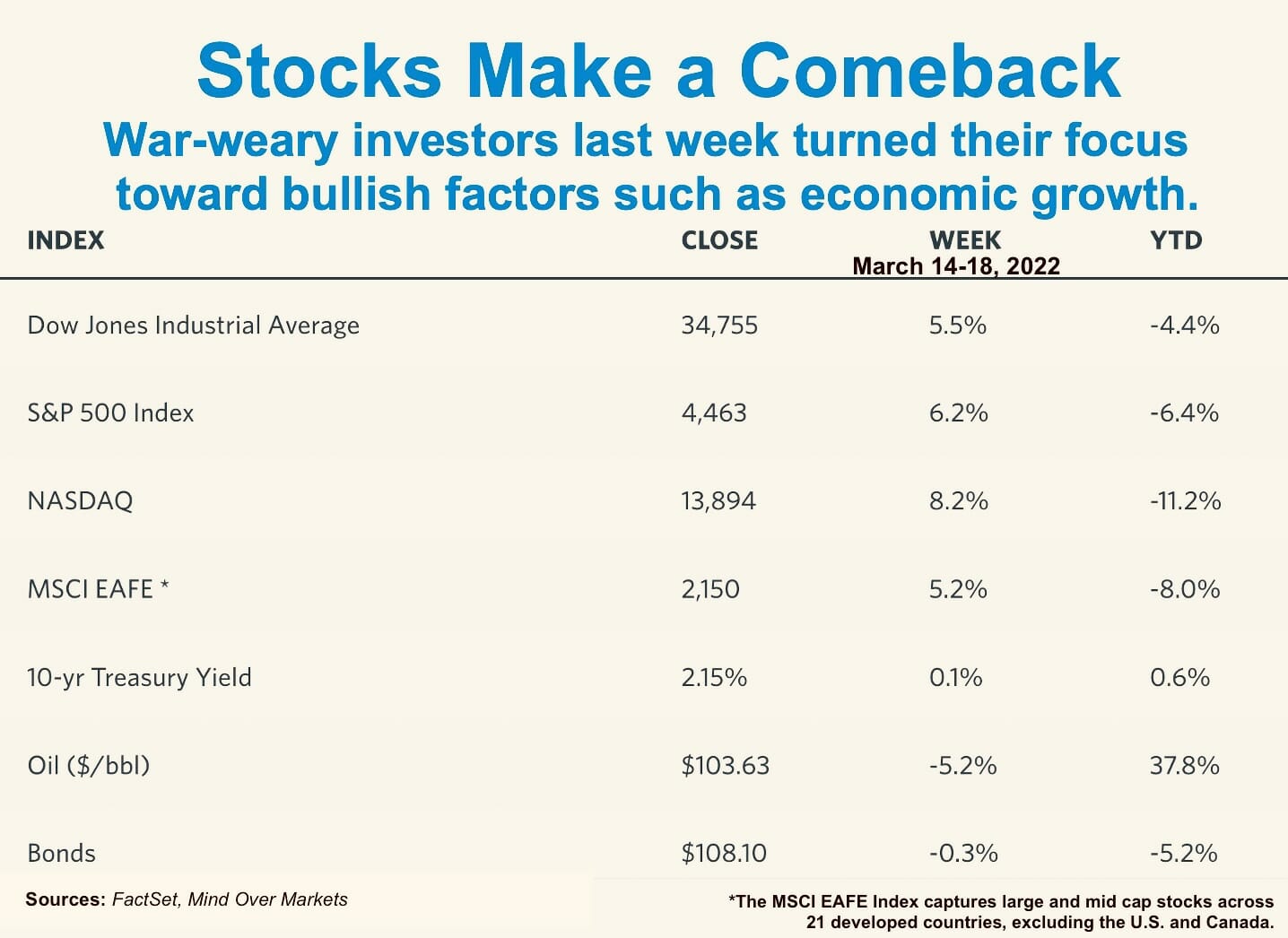 Geopolitical uncertainties still loom large. Putin last week gave a speech that truly alarmed the world, as he couched his invasion as a fight to de-Nazify Ukraine, despite the fact that Ukraine President Volodymyr Zelenskyy is Jewish and his father’s three brothers were murdered by the Nazis. Putin threatened a Stalinist purge against anyone in Russia who dared oppose his war.

But the financial community last week turned its attention from the Kremlin to the Marriner S. Eccles Federal Reserve Board Building. The Fed made it clear that it will continue to move forward with a series of rate hikes to fight inflation, which last month hit its highest level since 1982.

Fed policymakers revised their inflation forecasts higher. Inflation, as measured by the core Personal Consumption Expenditures (PCE) price index, is projected to be at 4.1% by the end of 2022, up from the projection in December of 2.7%. For 2023, core PCE inflation is expected to come in at 2.6%, up from the previous forecast of 2.3%.

In tandem with its 0.25% rate hike, the Fed released its “dot plot,” the levels at which individual Fed officials expect interest rates to settle. Given their significant revisions of projected inflation rates, the majority now expect seven hikes this year, four in 2023 and none for 2024. That would lift the policy rate to 1.9% in 2022 and 2.8% by the end of 2023, higher than the last cycle’s tightening peak of 2.5% in December 2018.

The Fed adopted a hawkish tone, for sure. And yet, as the table above shows, U.S. and global stocks rallied. Crude oil prices slumped. Stocks had been oversold and the bond market already has been pricing in an aggressive tightening cycle.

Despite rising inflation, the economy is still projected to grow at an above-average pace this year. Fed officials forecast U.S. gross domestic product to grow at a pace of 2.8% in 2022, above the past decade’s average of 2%.

It’s my view that the Fed’s tightening won’t kill the economic recovery this year. Unemployment hovers at the near-record low of 3.8% and job openings surpass the number of unemployed.

Much rides on the American consumer, who appears to be in good shape. In addition to robust employment rates, household savings are high and debt is low. After factoring in rising inflation, interest rates should remain negative in real terms. The talk you’re hearing about recession, or even stagflation, is probably unwarranted.

Examining the five tightening cycles since 1985, stocks have historically maintained in a positive trajectory six months and a year out. Heading into 2022, valuations had been frothy. The correction we’ve witnessed could be viewed as healthy. If the deadly madness in Ukraine subsides and crude oil prices moderate, we could witness another upward leg in equities.

As the above table shows, the tech-heavy NASDAQ racked up a torrid comeback last week, as investors ploughed back into mega-cap tech “story stocks” that had become reasonably priced again.

Sometimes, tech innovation is so powerful, it becomes nearly immune to rising rates, overseas war, or even pandemics. That’s where Apple (NSDQ: AAPL) comes in.

We could be days away from Apple shocking the world yet again, with just four simple words: “Introducing the Apple Car.”

Tech bellwether Apple is now reported to be working on a fully autonomous self-driving vehicle. The potential investment profits are huge.

But you might be surprised to learn that your greatest opportunity to make money from the Apple Car isn’t buying Apple stock itself.

Make one simple investment move today and you’ll lock in your shot at a huge payday when Apple drops its bombshell news about the Apple Car. For details, click here now.