“April is the cruelest month” wrote T.S. Eliot, in his 1922 poem The Waste Land. The phrase entered common parlance. A devout Christian, Eliot meant that in the modern secular world, spring offers no rebirth from the metaphorical death of winter. For the faithless, April is a false promise.

Let’s hope Mr. Eliot is wrong about April, because for investors, the first quarter of 2022 was cruel enough.

After a dismal Q1, stocks started the first trading week of Q2 with declines across the board, while longer-term bond yields climbed to three-year highs (see table). 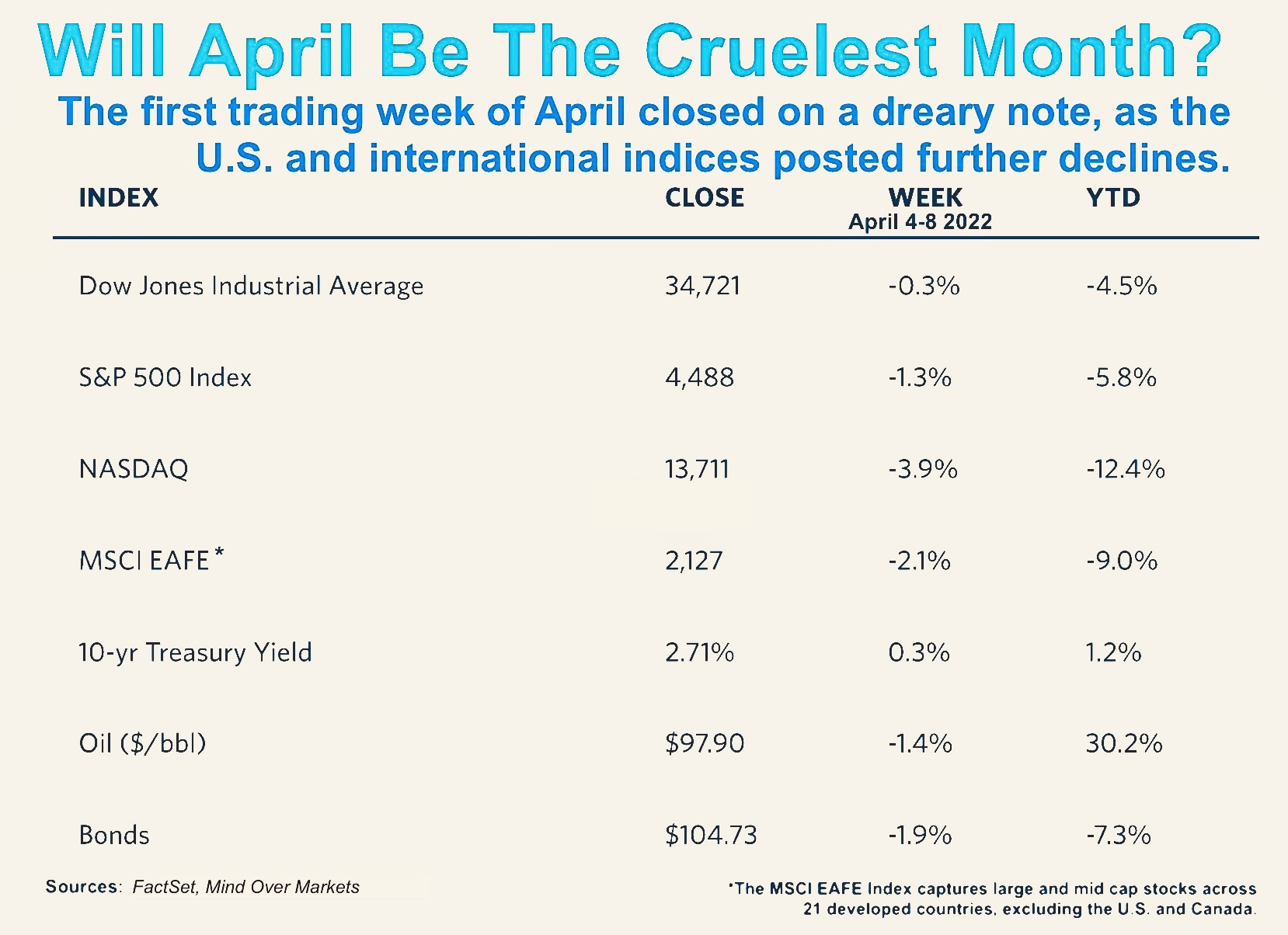 Driving stocks lower last week was release of the minutes of the latest meeting of the Federal Reserve’s policy-making arm, the Federal Open Market Committee (FOMC), which showed increasing hawkishness.

The FOMC’s March minutes offered insights into the pace of future interest-rate hikes, as well as the “tapering” of the Fed’s bond holdings of nearly $9 trillion.

The current consensus at the U.S. central bank embraces faster tightening, with perhaps one or more half-point increases in the policy rate. For historical context, the Fed hasn’t hiked rates by a half-point since 2000. With headline inflation probably on course to exceed 8% in April, the Fed is intent on taking a tougher stance.

What’s more, by allowing up to $95 billion in bonds to mature every month without getting replaced, the Fed will be withdrawing liquidity from the financial system, putting further pressure on long-term yields.

As the Fed implements its most hawkish tightening cycle in more than 20 years, it will be up to economic growth and corporate earnings to determine whether stocks stay afloat. That’s where I see good news.

The global economic expansion is wobbly, especially as the Russia-Ukraine war wreaks havoc with supply chains, but it remains on track. The manufacturing Purchasing Managers’ Index (PMI) still signals expansion, with a reading of 57.01 for March.

Corporate bottom lines are showing resiliency as well. This week, the big banks are on the docket for Q1 earnings reports.

As of April 8, the S&P 500 is expected to report year over-year earnings per share (EPS) growth of 4.5% for the first quarter of 2022, according to research firm FactSet. Among the 20 S&P 500 companies that have reported actual earnings for Q1 2022 to date, 70% have reported EPS above the mean estimate.

Over the past 10 years, actual EPS reported by S&P 500 companies have surpassed estimated earnings by 6.5% on average.

In the coming months, it’s likely that growth will slow and the stock market will struggle for traction. However, a combination of recession and bear market, as some pessimists predict, remains a remote possibility.

Preparing for a soft patch…

To be sure, rate hikes and quantitative tightening over the next two years will generate headwinds for both equity and fixed-income markets. The days of easy money are over.

As the tightening cycle progresses, liquidity is sucked out of the system, growth slows, and the investment climate gets tougher. But I still believe that post-pandemic reopening and technological innovation will help prevent a recession.

The textbooks define a recession as two consecutive quarters of negative growth. I don’t see that happening this year or even next. Instead, we’re more likely to endure a temporary “soft patch,” whereby growth slows, or perhaps dips into negative territory for a single quarter, before picking up the pace again as certain headwinds (e.g., supply chain imbalances and inflation) start to dissipate.

Stay cautious but stay invested. Pursue a diversified approach that strikes a balance between cyclical and defensive sectors.

And if you’re looking for “portfolio insurance,” consider the advice of our premium publication, Rapier’s Income Accelerator, helmed by my colleague Robert Rapier.

Robert Rapier’s trading service cranks out steady profits regardless of rising rates, hotter inflation, or the whims of the Federal Reserve. Anyone who adds Robert’s little-known strategy to their portfolio can enjoy more cash, more often, with less risk. Click here now for details.