Welcome to my latest video presentation in which I round-up the week’s major news in the marijuana industry. Below are edited excerpts.

I’m always astonished at the frenetic level of indoor cigarette smoking on the TV show MadMen, the period drama about 1960s Madison Avenue. How life has changed.

Nowadays, if you were to light up a tobacco cigarette at a house party, you’d likely get defenestrated. Light up a marijuana joint, though, and the other guests probably wouldn’t bat an eye.

For most Americans, marijuana has lost its stigma. That much is obvious. But the change goes even deeper. Weed is increasingly commonplace and accepted as just another consumer product.

Among those saying they’ve tried pot, two-thirds report having used it at least annually, and intend to consume it again. About 13% of respondents have yet to partake but aren’t opposed to marijuana and would consider trying it in the future.

The following chart breaks down the characteristics of America’s cannabis users: 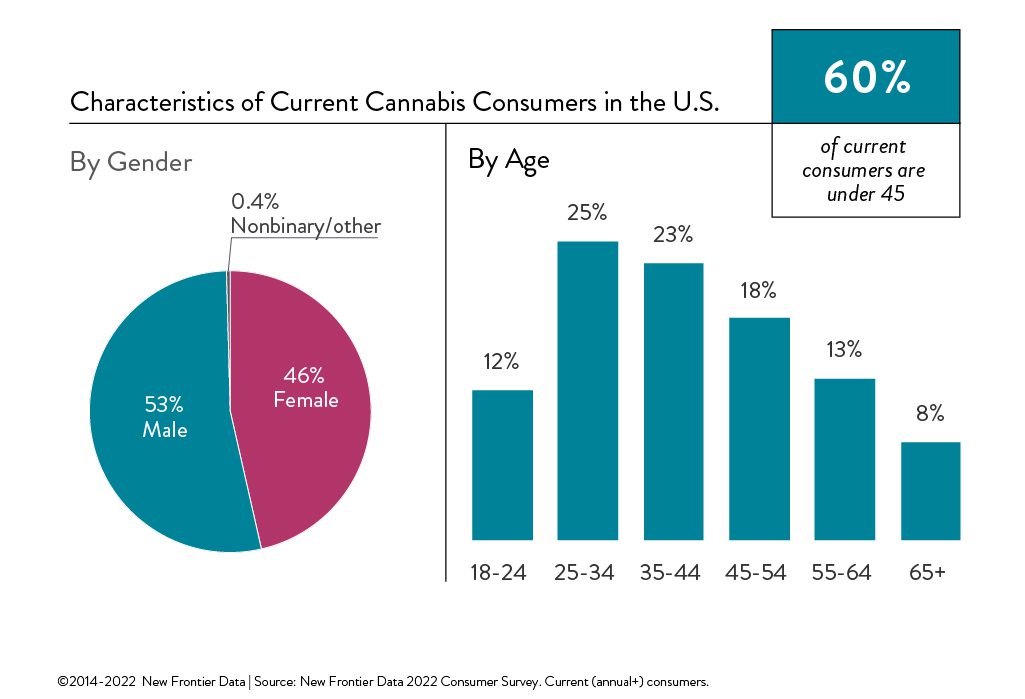 More than one-third (36%) of current consumers use cannabis multiple times daily. Another one-third consume once a day or every other day (31%), and one-third (33%) consume between once per week and once per year.

A majority (57%) of current consumers use both flower and non-flower cannabis products. One-quarter (25%) exclusively use flower, while 17% use exclusively non-flower forms.

Together, aims for “unwinding” (i.e., relaxation, reducing anxiety, or stress relief) comprised the primary motivation for use among nearly half (46%) of current consumers.

Brick-and-mortar stores are followed closely by friends/family members as consumers’ primary sources for cannabis. More than 4 in 10 (43%) of report supplying friends or family with cannabis, while 12% say that they do so regularly.

For most consumers, cannabis is a low-spend/high-frequency purchase. (For additional details and charts, watch the above video.)

A recent public opinion poll conducted by YouGov found that 27% of Americans agreed that it’d be ideal if people used more cannabis instead of booze, whereas 20% said that would be a bad idea. Most respondents (38%) said it would be neither good nor bad, and an additional 15% said they weren’t sure.

Marijuana is indeed becoming a basic staple of life. Yes, the marijuana industry remains a fast-growth opportunity and it still has many legal hurdles to conquer, but it’s also showing signs of maturity as a global retail business.

In growing numbers of cities and towns across America, you can just walk through the door of a marijuana dispensary and casually buy pot, the way you can walk into a CVS to buy a pack of gum.

Branding is of vital importance for marijuana purveyors to succeed. As the New Frontier report puts it:

As the industry grows in scale and specialization, differentiated brands with resonant products aimed at well-defined target segments are far likelier to secure effective competitive market positions over the long term than are brands aspiring to serve the broadest base possible without tailoring to individual subgroups.”

Two signs that Mary Jane is coming into her own are 1) greater corporate consolidation and 2) the widespread emergence of ancillary industries that provide “pick-and-shovel” services.

I’ve just described trends that are tailwinds for marijuana companies. The time to invest in pot stocks is now, while the momentum builds. Looking for the best opportunities in the cannabis sector? Click here for our special report.