Union Pacific: A Play on Energy Growth and Inflation

Many investors are fixated on the high-flying “story stocks” they see on financial television. Frankly, I’m sick of hearing about Elon Musk and his intentions for Twitter (NYSE: TWTR).

Here’s a sector that almost never gets breathless coverage from the Jim Cramers of this world: railroads.

One area of expanding opportunity for trains is the shipment of crude oil, as producers grapple with a shortage of pipelines in Canada’s oil sands and U.S. shale regions.

Energy intermodal transportation is one of the fastest growing categories for trains and offers yet another hedge against inflation as well as delivering new growth. What’s more, train companies are more effective at passing on costs during inflationary periods.

One railway with exposure to both rising intermodal and crude oil shipments is Union Pacific (NYSE: UNP).

Based in Omaha, Nebraska, Union Pacific (market cap: $153.7 billion) is the largest freight-hauling railroad in North America. UNP operates 8,500 locomotives over 32,313 route-miles throughout 23 states in the U.S. Union Pacific’s operations in the central and western half of the U.S. are valuable territory, giving the company enormous price elasticity (see map). 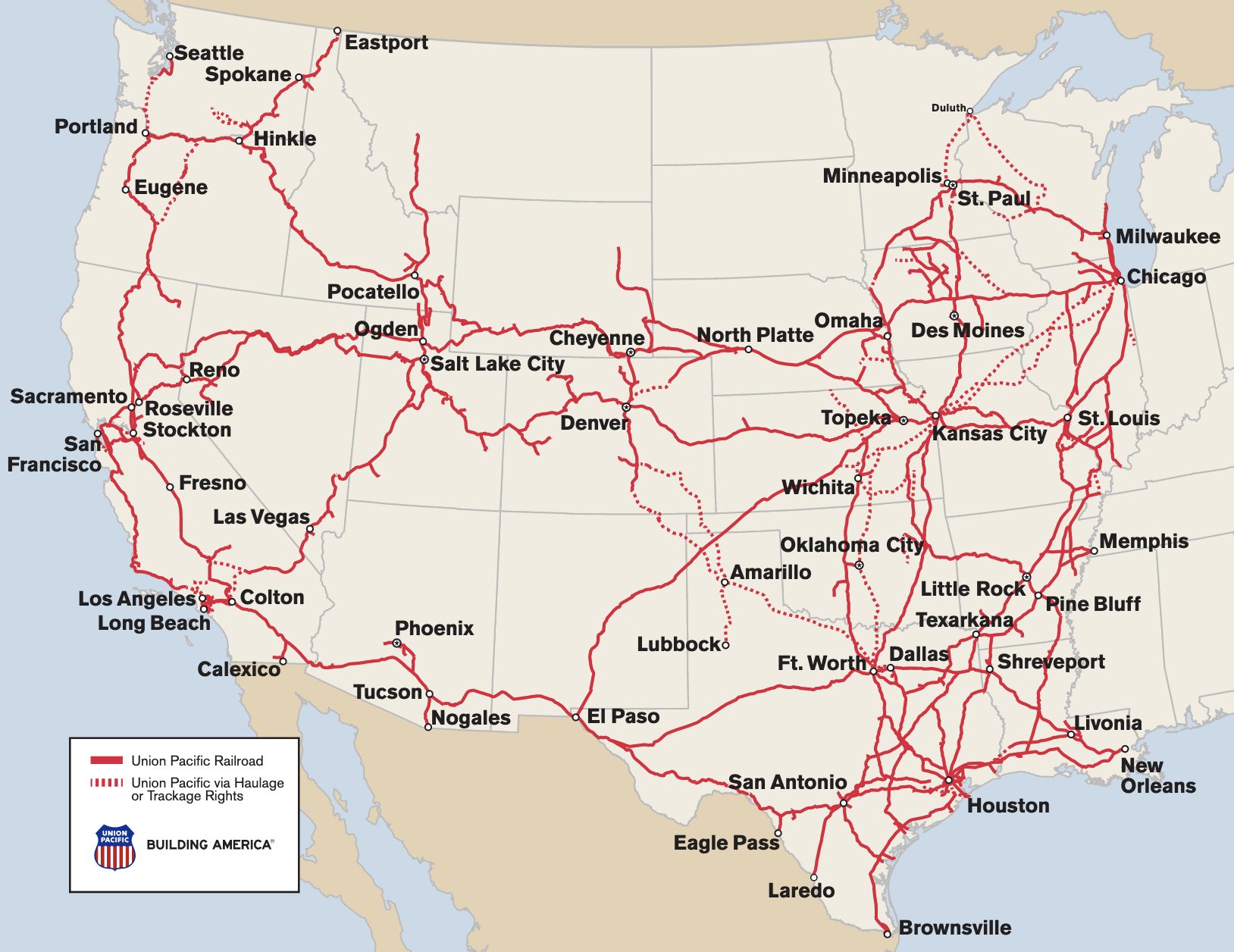 Founded in 1862, UNP was a barometer for overall economic growth during the American industrial revolution of the 19th century…and it still is today. President Biden’s massive infrastructure spending bill should provide a boon for transportation stalwarts such as UNP.

This railroad operator combines new technology with roll-up-your-sleeves industrial activity. The stock doesn’t enjoy media hype, but Union Pacific is an innovator. The company continually upgrades its infrastructure and embraces the latest advances in transportation.

Union Pacific’s revenue is well diversified across different categories of freight: intermodal, coal, industrial, agricultural, chemicals, oil, and automotive. Revenue from each of these sectors can fluctuate due to their cyclical nature. To help mitigate some of this risk, Union Pacific tries to lock in long-term freight contracts.

Union Pacific has been able to grow revenues and earnings faster than peers, and the company has strong pricing power because it’s the sole major railroad to serve several Midwest and West Coast regions, allowing it to lock in more profitable contracts.

The increasingly constrained pipeline capacity in the Marcellus, the Utica and other shale regions, and the improving cost-competitiveness of service makes Union Pacific a compelling investment.

Union Pacific is embarked on a multiyear campaign of operational streamlining that will make it one of the most cost-effective railroads in the nation.

Union Pacific currently has total cash on hand of more than $1 billion (most recent quarter), which should serve as a handy war chest as management implements its expansion strategy of acquiring complementary railroad lines.

As energy prices rise and economic re-opening continues, railroads are a smart cyclical bet. As business booms, railroads are keen to forge greater economies of scale, through mergers and acquisitions (M&As).

Indeed, many S&P 500 corporations are flush with cash, and they want to put that money to good use. In addition to stock buybacks, they’re about to unleash a “feeding frenzy” of M&A activity. The level of blockbuster corporate deals is breaking records.

You can profit from the surge in deal-making on Wall Street, by following the advice of my colleague, Nathan Slaughter, chief investment strategist of Takeover Trader. He has a knack for pinpointing big corporate deals, before they happen. Gain instant access to Nathan’s latest insights, by clicking here now.