It’s “Weed Day” and Pot Stocks Are On Fire

The Russia-Ukraine war, rising inflation, Federal Reserve tightening, the coronavirus pandemic…these events can all wait for another day.

Marijuana enthusiasts celebrate April 20 (or 420) as an international holiday for cannabis culture. As I write this article, millions of people are holding pot-related rallies around the world.

Let’s take a break from the daily gyrations of the financial markets. In honor of 420 (aka “Weed Day”), I want to conduct a deep dive into a booming business: cannabusiness, to be precise.

The legalization of marijuana represents your greatest chance right now to exponentially boost your wealth.

One of the surest ways to generate investment profits is to pinpoint certain industries that will continue to rapidly expand, regardless of temporary headwinds in the broader markets. An industry that stands out for its multi-year momentum is marijuana.

And it’s not just cannabis. Psilocybin fungi (aka “magic mushrooms”), lysergic acid diethylamide (LSD), and other psychotropic substances are increasingly legal across America, as researchers discover their benefits as physical and psychological treatments.

These mind-bending substances are transitioning from pariahs to mainstream recreational and medicinal use. Billions of dollars are at stake. Below, I’ll point you in the direction of the right investments in marijuana and psychedelics.

If you think it’s too late to tap the marijuana green rush, you’re greatly mistaken. According to the latest market outlook from research firm New Frontier Data, global cannabis sales are projected to hit $51 billion by 2025.

The United States is by far the largest market. U.S. legal sales are projected to more than double between 2022 and 2030, to reach $72 billion (see chart). 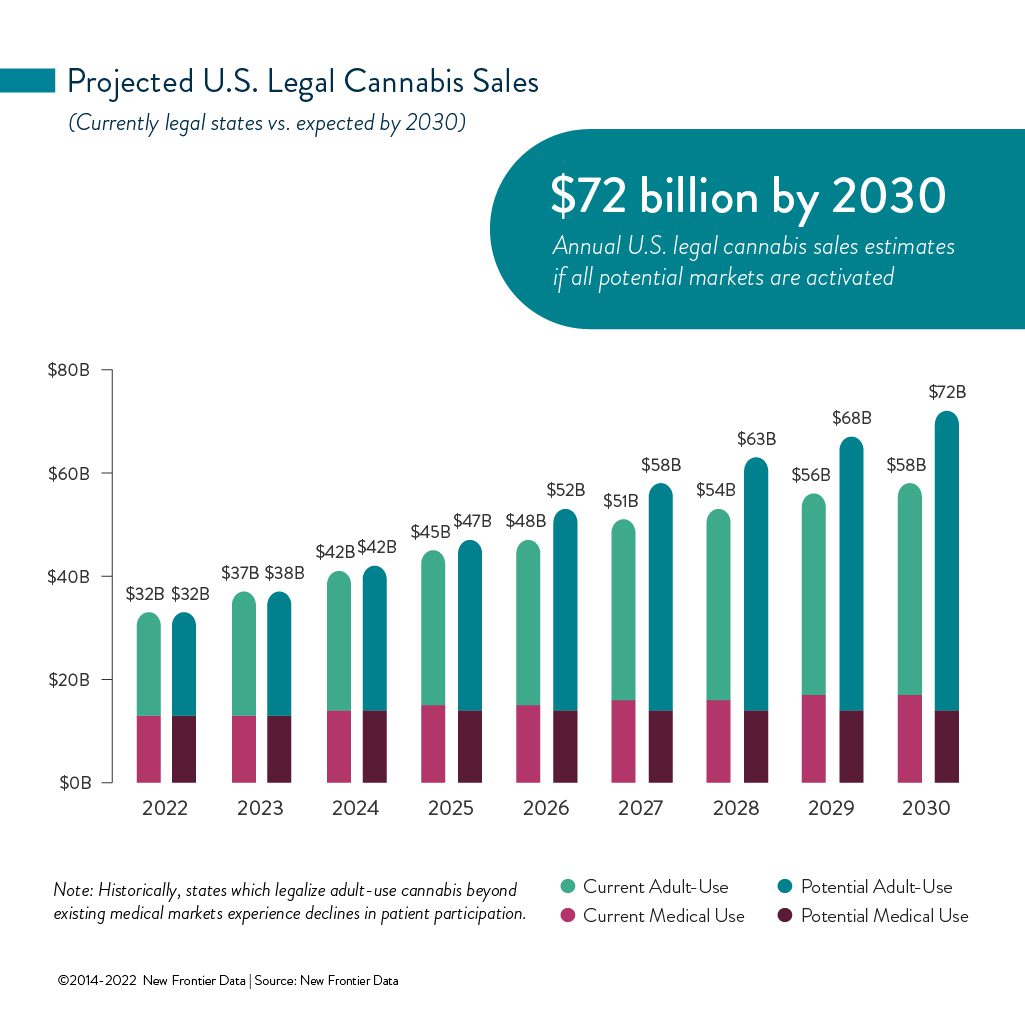 It seems hard to believe, but a decade ago, no U.S. states allowed marijuana for adult (i.e., recreational) use. None!

New state-level actions bring the total to 18 states where cannabis that’s high in tetrahydrocannabinol (THC) is legal for adult use, and 38 where high-THC cannabis is legal for medical use. THC is the psychoactive compound that produces the “buzz” for users.

The U.S. midterm elections in November 2022 will provide voters with more opportunities to express their support for the creation of new marijuana markets across several states. There are proposed adult-use ballot initiatives in Arkansas, North Dakota, Ohio, and South Dakota. There are both adult-use and medical ballot measures proposed in Florida, Idaho, Missouri, Nebraska, and Oklahoma.

Marijuana has evolved from culture war flash point to “essential service.” This green rush is feeding an investor frenzy, reminiscent of the 19th century gold rush.

For the counterculture of the 1960s and 1970s, smoking pot was an illegal act of rebellion. And today? In many cities throughout North America and Europe, it’s as easy to get marijuana delivered to your front door as pizza. As Bob Dylan sang: The Times They Are a-Changin’.

The legalization of cannabis is one of the greatest investment opportunities in a generation. “Mary Jane” has moved from Woodstock to Wall Street, representing a disruptive force for a slew of industries, including pharmaceutical, tobacco, beverage, and cosmetics companies.

Public sentiment continues to shift in favor of marijuana. According to the latest Gallup poll, 68% of Americans think marijuana should be legalized. In 1969, that number stood at a paltry 12%.

Parents used to warn their kids about marijuana. Now mom and dad are using pot themselves. Among patients in the U.S. who use medical marijuana, 45% are parents.

Lawmakers are aware of this cultural shift and they’re jumping on the bandwagon. Elected officials also covet the tax revenue generated by marijuana companies.

The next catalyst for growth…

Marijuana remains illegal at the federal level in the U.S., whereas individual states are free to set their own laws regarding pot. In my opinion, it’s only a matter of time before federal prohibition is lifted. And when that happens, the marijuana industry will explode on the upside.

The U.S House of Representatives voted this month to legalize marijuana at the federal level. The bill’s fate is uncertain in the 50-50 Senate, but the fact is, Democrats in the House, with some Republican support, managed to get landmark legalization legislation across the finish line. Pot stocks across the board jumped on the news; their ascendancy should continue for the rest of 2022 and beyond.

That said, marijuana stocks can be volatile. Investors need to tread wisely. You should avoid risky penny stocks and fly-by-night players. When looking for suitable marijuana investments, my strategy is to find companies that apply a unique value-add, whether in the recreational or medicinal sector.

I look for pot companies with patents, proprietary technology or special managerial know-how. I also prefer companies with solid balance sheets, branded products and extensive supply chains. These are the marijuana investments that will thrive over the long haul.

Your definitive guide to pot profits…

Some cannabis stocks are stellar investments. Many others are not. You need to conduct due diligence…and I’ve done the homework for you.

If you’re looking to cash in on the trends I’ve just described, consider reading my new book: The Wide World of Weed and Psychedelics.

As they increasingly become legal around the world, cannabis and related psychotropic substances are generating huge gains for proactive investors. But the time to act is now, before the herd makes these investments too pricey.

The product of years of painstaking research, my book is your one-stop primer to profiting from the booming marijuana and psychedelics industries. Click here to secure your free copy.