How Much Should You Fear a Recession?

Depressed by the news? You’re not alone. But the fault isn’t just with current events. It also has to do with the nature of media itself.

Mass media tend to emphasize negative news because it creates stronger psycho-physiological reactions in the audience, which boosts viewership and in turn monetization.

Accordingly, the media tend to generate a downward spiral of cynicism and gloom. Which brings me to the topic of economic recession.

I’m hearing the “R-word” increasingly bandied around these days, as more and more pundits insist on talking down the economy. To be sure, the U.S. economy faces several risks, but it also boasts many bright spots. Below is my clear-eyed assessment of the risk of recession. First, the good news.

Consumers are sitting on $2.5 trillion in excess savings amassed during the pandemic. Retail sales grew 0.5% in March from the previous month and 6.9% on a year-over-year basis.

Initial claims for unemployment insurance have fallen dramatically over the past year and hover at their lowest point since 1969. Take a look:

Watch This Video: Dispatches From The Front Lines

A recession is generally defined as two consecutive quarters of negative GDP growth. We may encounter a single quarter of slowing or negative growth, but two straight quarters of contraction this year or next seems like an improbable scenario, considering the strength of the fundamentals I’ve just described.

The biggest risks to the economy are the Russia-Ukraine war and inflation. The war is a wild card; I can’t presume to know how it will turn out or when it will end. Inflation is more susceptible to empirical analysis.

Consumer and producer prices are soaring, prompting the Federal Reserve to get tough. Last Thursday, Fed Chair Jerome Powell spooked the markets by sounding a more hawkish tone at a panel convened by the International Monetary Fund (IMF).

Powell suggested the pace of tightening would accelerate, with an interest rate hike of 50 basis points (bps) “on the table” for the May meeting of the Federal Open Market Committee (FOMC).

Powell also indicated that additional hikes of 50 bps are supported by several FOMC members. (One basis point is equal to 1/100th of 1%.) Powell’s comments contributed to a down week for equities: 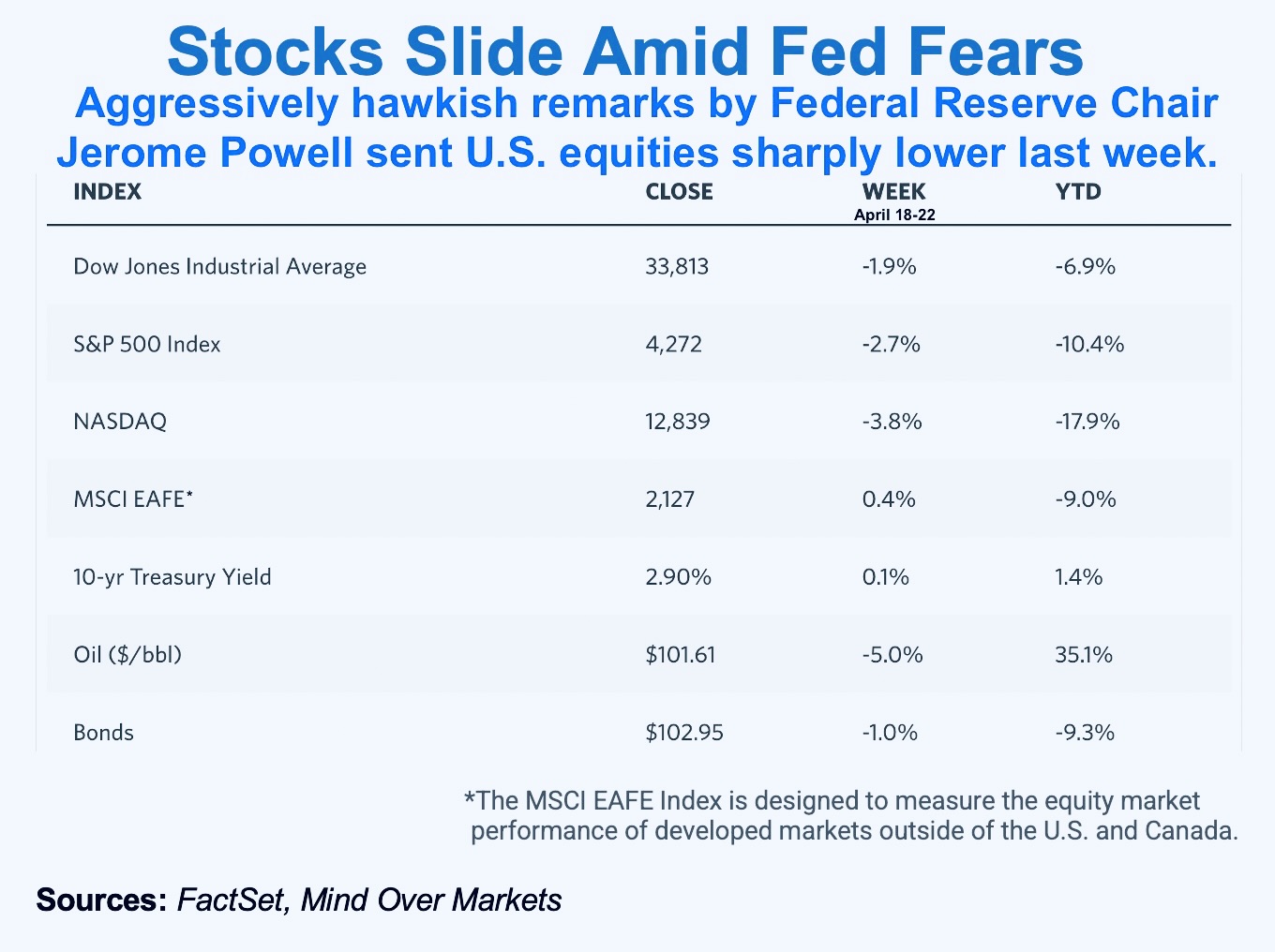 Short- and longer-term interest rates have spiked higher in 2022, with 10-year Treasury yields rising 1.4% and two-year yields rising 1.9% year-to-date. As you can see from the above table, the benchmark 10-year yield is edging toward 3%.

To be sure, inflation is running hot, but there’s no evidence that it’s becoming deep-rooted over the long haul. Many analysts expect inflation to moderate later this year, which obviates the argument that inflation expectations are becoming entrenched and thus a self-fulling prophecy.

According to a study published in March 2022 by the Peterson Institute for International Economics:

“The case for remaining relatively optimistic about the outlook for inflation despite the run of bad news in recent months rests on two main considerations. First, a variety of special factors that boosted inflation in 2021 are unlikely to directly contribute as much to inflation in 2022.

In fact, these factors may put downward pressure on inflation, especially during the second half of 2022. This reversion property helps explain the remarkable stability of inflation over the past couple of decades. If inflation continues to exhibit this property, it should move down, especially as the supply situation improves.”

Evidence that inflation isn’t anchored offers the strong possibility that the Fed will manage to execute a “soft landing” for the economy.

Some analysts contend that the S&P 500 has already bottomed in 2022 and could end the year at roughly 5,100. We face a busy earnings week ahead, with mega-cap tech titans scheduled to post quarterly results. How these bellwether companies perform will largely dictate the market’s near-term direction.

In search of momentum…

Are you looking to tap growth, but also mitigate risk? Consider an industry with unstoppable momentum: marijuana.

As they increasingly become legal, cannabis and other psychotropic substances are generating huge gains for investors. That’s why I wrote a book: The Wide World of Weed and Psychedelics.

My new book is your one-stop primer for profiting from the booming marijuana and psychedelics industries. Click here to get your free copy.