Like a movie monster that just won’t die, COVID continues its rampage. The Omicron subvariant BA.2 has emerged to trigger an increase in infections in the U.S. and around the world, from Manhattan to Beijing.

The latest global statistics from Johns Hopkins (as of April 26) confirm it: the coronavirus still looms large. This subvariant is highly transmissible and contagious, but fortunately not more virulent in terms of causing more severe disease.

China is getting hit particularly hard. The country is dealing with its worst coronavirus surge since the nadir of the pandemic in 2020. Part of the reason is Beijing’s insistence on sticking to domestically produced but inferior vaccines.

The combination of COVID’s comeback, the Russia-Ukraine war, and rising inflation is making investors jittery. That said, after a rough week, stocks bounced back Monday, as investors scooped up beaten-down technology shares amid a retreat in bond yields.

Adding mojo to the tech sector, at least temporarily, is Elon Musk’s purchase of Twitter (NYSE: TWTR) for $44 billion. By following through on his stated intentions to buy the social media platform, Musk surprised Wall Street. Almost no one (including me, frankly) thought he was serious.

The lesson, I suppose, is to never underestimate a billionaire entrepreneur who casually smokes marijuana during media interviews. (More about marijuana, in a minute.)

Following last week’s selloff, stocks remain under pressure as China’s COVID infections spread. China’s economy already is showing damage from its lockdowns and a slowdown in the world’s second-largest economy would drag down the global economy. And it’s not just China. Due to the BA.2 variant, cases are rising in the U.S. and Europe.

Crude oil prices have been tumbling as well, as analysts predict a slump in oil demand due to these headwinds. Notably, in its Monthly Oil Market Report for April, OPEC slashed its oil demand growth estimate for 2022 by roughly 500,000 barrels per day.

Blended combines actual results for companies that have reported and estimated results for those that have yet to report. Energy leads the way (see chart): 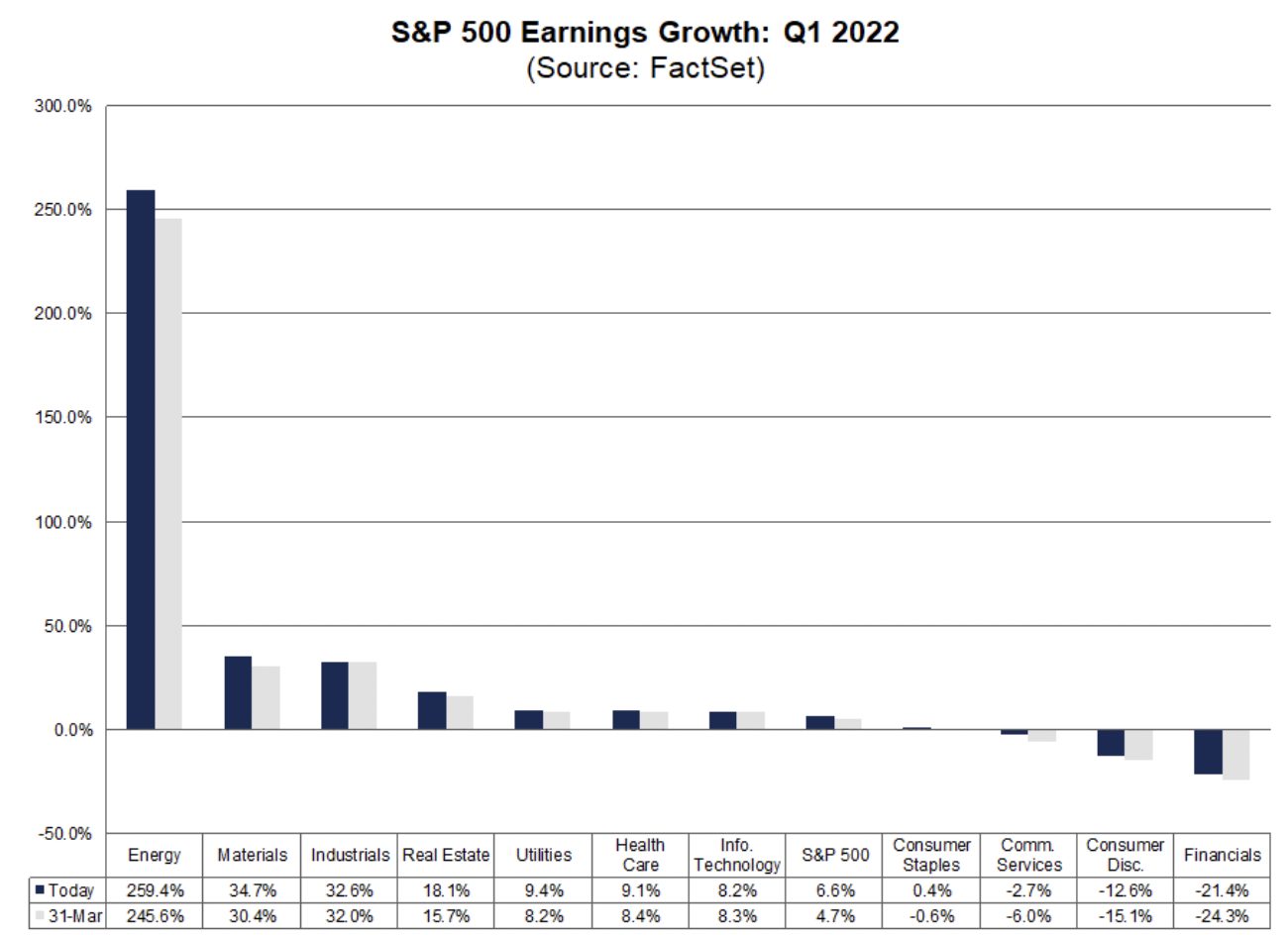 Positive earnings surprises reported by companies in the financials and communication services sectors, and upward revisions to earnings estimates for companies in the energy sector, have been the largest factors driving increases in the earnings growth rate since the end of the first quarter.

Watch This Video: Dispatches From The Front Lines

Upward revisions to revenue estimates for companies in the energy sector have been the greatest factor to the improvement in the revenue growth rate since the end of Q1.

The rest of 2022 looks positive as well. The consensus estimate is for year-over-year earnings growth of 7.0% for Q2, 11.7% for Q3, and 11.2% for Q4. For calendar year 2022, analysts project earnings growth of 10.9%. But if the war in Eastern Europe drags on and COVID cases continue spiking, those projections could get slashed.

Are you looking to tap growth, but also mitigate the risks that I’ve just described? Consider an industry with unstoppable momentum: marijuana.

Elon Musk isn’t the only one with a predilection for weed. Millions of ordinary people are turning to cannabis for recreational and medicinal purposes, as weed is increasingly legalized around the world. Marijuana is transitioning from social pariah to mainstream consumer product.

That’s why I wrote a book: The Wide World of Weed and Psychedelics. The product of years of painstaking research, my new book is now available in hard copy.

My book is your one-stop primer for profiting from the booming marijuana and psychedelics industries. Click here to get your free copy.