If you are a believer in contrarian investing, right about now might be a good time to bet on a stock market reversal. With so much bad news dragging down stocks over the past three months, things can only get better, right?

That remains to be seen. But we may get a relief rally before Labor Day, especially if inflation numbers for April (scheduled for release on May 11) are less than feared.

In that case, the Fed may not have to raise interest rates as much as Wall Street has priced into the stock market. Two months ago, the Fed released its “dot plot” for the next two years. The majority of the Fed’s Board of Governors expect the Fed Funds “overnight” rate to rise above 2.5% in 2023.

Apparently, the bond market agrees. Last week, the yield on the 2-year Treasury note rose above 2.7%. It hasn’t been that high since 2018. The last time it was higher than that was in 2008, just before the stock market crashed.

In March, the Consumer Price Index for All Urban Consumers (CPI-U) rose by 8.5% over the previous year. That’s its highest growth rate in 40 years. But if CPI-U comes in lower than that for April, the financial markets could reverse direction in an instant.

We’ve Seen This Movie Before

If we do get a relief rally, stocks that have performed the worst this year may rebound the most. So far this year, the worst-performing of the 11 Global Identification Classification Standard (GIS) sectors of the S&P 500 Index has been Communication Services at -21% (through May 4).

Within that sector, the industry that has performed the worst is Movies & Entertainment at -44%. That isn’t surprising given the massive decline posted by video streaming service Netflix (NSDQ: NFLX) this year. Through the end of April, NFLX was down more than 60% in 2022. 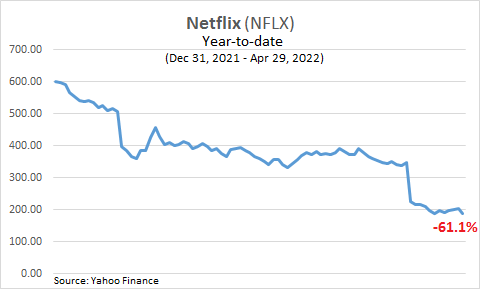 At that price, Netflix is valued at a little over 18 times forward earnings. That is roughly equivalent to the same multiple for the S&P 500 Index. That’s not to say that NFLX can’t fall further, but its Relative Strength Index (RSI) of 19 suggests that it has become severely oversold.

However, I don’t recommend betting on one stock to participate in a stock market reversal. In this case, I’d go with the Communication Services Select SPDR Fund (XLC).

Given the big drop in NFLX, it is no longer among the fund’s top 10 holdings. Now, its largest positions are Meta Platforms (NSDQ: FB) and Alphabet (NSDQ: GOOGL), each at approximately 21% of total assets.

To be clear, I am not predicting that any of those companies will surprise Wall Street with unexpected good news. The only point I am making is that they are among the most oversold stocks this year and should rebound more than the overall market if a reversal occurs.

If you really feel like rolling the dice, buying a call option on XLC would amplify whatever positive movement in its price takes place over the next few months. A call option increases in value when the price of the underlying security goes up.

Last week while XLC was trading near $61, the call option that expires on September 16 at the $60 strike price could be bought for $5. For this trade to be profitable at expiration, XLC must appreciate at least 7% over the next four months.

Actually, it only needs to start heading up soon for this trade to make money. As soon as Wall Street starts believing that inflation has been tamed, time premiums for call options could rapidly expand.

Of course, that may not happen at all. But there is anecdotal evidence to suggest that consumer prices are starting to level off. In March, the CPI for Used Cars and Trucks fell for the first time in nearly two years.

That isn’t much to go by. But by the time it becomes apparent that inflation is slowing down, stock prices may have already started rebounding. Contrarian investors, take heed.

A Note From The Publisher: Our colleague Jim Pearce expertly examined opportunities for making money amid today’s risks. But he only scratched the surface.

One industry that deserves your special attention right now is marijuana. That’s right…weed. Marijuana has gone from social pariah to mainstream consumer product. The “green rush” also is resistant to inflation and recession.