How to Survive a Bear (Market) Mauling

Talk is growing louder on Wall Street that the bear is awakening from hibernation. I’m not among those predicting a bear market, but it pays to get prepared. Below, I’ll show you survival tactics.

A bear market, generally defined as a 20% or more decline from a high, would mark the end of the COVID-era rally that sent stocks to record highs. Unprecedented Federal Reserve stimulus, to combat pandemic-caused economic damage, has fueled the ascendancy of stocks. But now the easy money party is over.

The stock market is swooning in the face of Fed tightening. Investors are frightened that the Fed’s increasingly hawkish stance will strangle the economic recovery and hence stocks. Signs of an economic slowdown in China are exacerbating those concerns.

However, in pre-market futures trading Tuesday, the major U.S. indices were firmly in the green, aiming for a rebound. Robust growth in corporate earnings and the jobs market still provide traction for equities.

Watch The Video: Market Meltdown Ahead?

But warning signs abound. The CBOE Volatility Index (VIX), also known as the “fear index,” hovers at 34, well in excess of its longer-term average of about 20. The U.S. dollar sits at a new 20-year high.

U.S. equity mutual funds and exchange-traded funds reported $37 billion in outflows over the past four weeks, the biggest four-week total since late 2018.

Economically sensitive commodities are dropping in price, due to expectations of lower demand amid slower economic activity. Crude oil and copper both looked bullish in April; that’s no longer the case.

Commodities prices are leading indicators for the overall economy and inflation; their recent declines could presage recession. The silver lining, though, is less upward pressure on producer and consumer prices. We’ll get the latest U.S. Consumer Price Index (CPI) data on Wednesday. The year-over-year CPI number came in at 8.5% for March; the April number is expected to come in at 8.1%.

When it comes to Fed-triggered stock declines, we’ve seen this movie before. The current Fed-induced slump is an echo of the previous tightening cycles of 1994 and 2018, during which investors fretted that monetary policy was getting far too strict. Equities declined 8.9% in 1994 and 19.8% in late 2018, but over the following six months, posted respective rebounds of 5.2% and 25.3% (see chart). 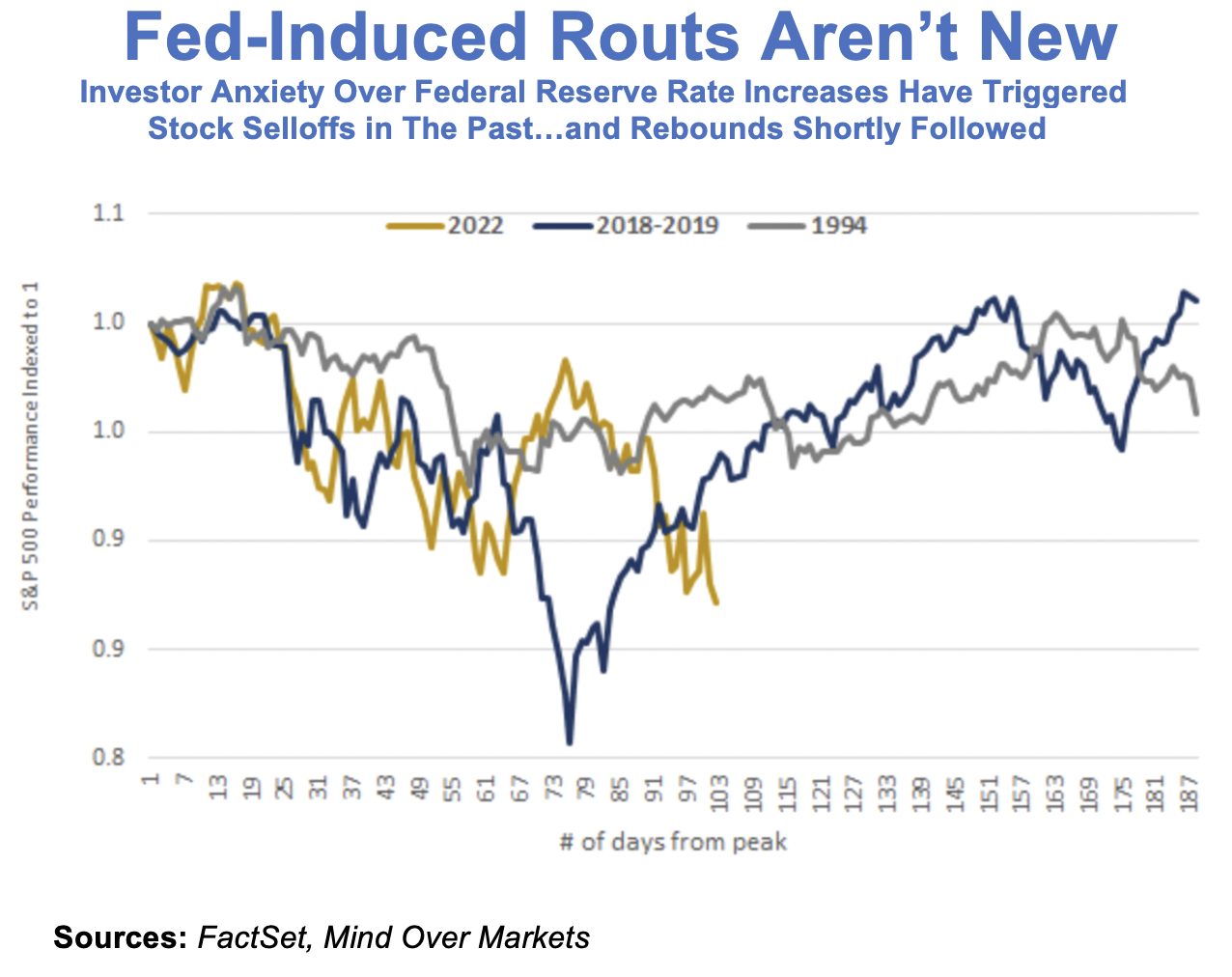 In a familiar pattern, the U.S. central bank is taking an aggressive approach on the front end, to earn inflation-fighting credibility and to create elbow room for later as it gauges the initial effects of tightening. If the Fed decides that economic damage warrants a pivot toward dovishness, we’d likely see a rally in stocks. Precedence, then, offers some hope.

As a protective measure against a possible recession and bear market, increase your exposure to “essential services” sectors that have a history of weathering tough conditions: utilities, health care, and consumer staples. In the latter category, global companies that offer well-known brands are your best bet.

There’s another industry that’s evolved into an essential service provider, the identity of which might surprise you.

As fears of a recession and bear market increase, you should seek solace in marijuana…not necessarily to get high, but as a way to make money. Canna-business is better insulated than most other industries from risks such as inflation and Fed tightening, making the right pot stocks “defensive growth” plays now.

It’s an investment truism: invest in products that people will always want, in good times or bad. And when it comes to providing a product that people crave the world over, marijuana passes the test.

In fact, a new study released last week shows that marijuana is more popular with American consumers than the food and beverages sold by coffee giant Starbucks (NSDQ: SBUX).