Welcome to my latest video presentation. Below is a condensed transcript; the video contains additional charts and details.

The father of value investing, Benjamin Graham, famously said: “Price is what you pay; value is what you get.”

In this presentation, I’ll show you how to prevent getting burned by cheap stocks that deserve to be cheap.

In the meantime, stocks suffered another down week, but pared losses with a surge on Friday. The Dow Jones Industrial Average, S&P 500 and EAFE are managing to stay out of bear territory, although we can’t say the same for the tech-heavy NASDAQ.

We saw the sixth consecutive week of losses for U.S stocks, the first time that has occurred since 2011 (see table): 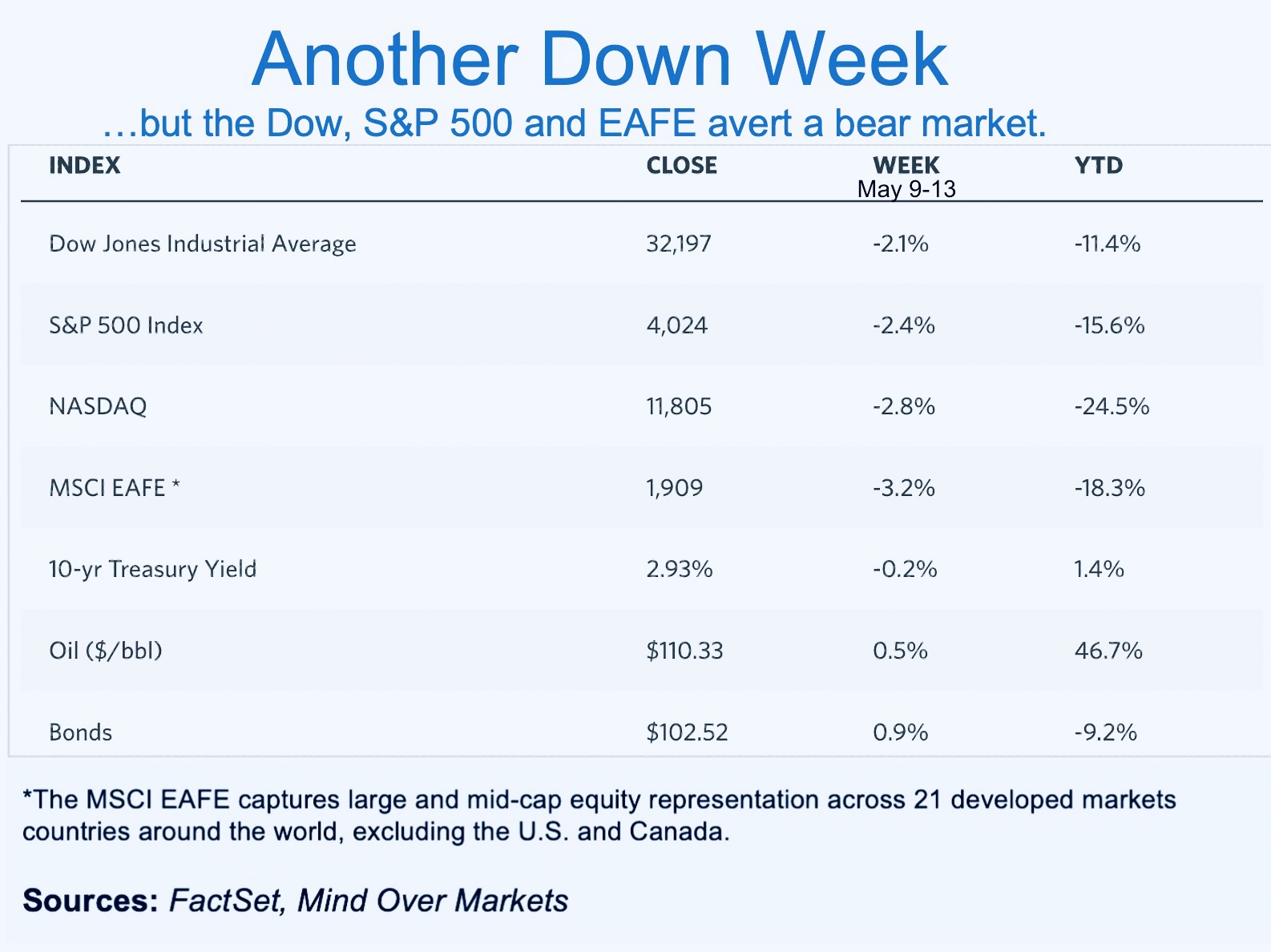 Initial jobless claims last week showed a persistent recovery with a tight labor market. Initial claims (a proxy for layoffs) rose 1,000 to 203,000 in the week ended May 7, the Labor Department reported Thursday. The consensus had estimated new claims would fall to 194,000.

Companies are still clamoring to fill openings. Even as the economy loses some steam, employers are likely to avoid layoffs and instead slow down hiring.

Sifting through the bargain bin…

During these sell-offs, should you buy on the dips? Yes, but you must be highly selective. There’s a Wall Street saying: never try to catch a falling knife. A falling investment could rebound. Or it could lose more value. Trying to predict the bottom is like grabbing a knife on its way down. Pain usually ensues.

That said, I don’t dread corrections. I welcome them. After two years of a powerful market rally, stocks had gotten expensive, especially in the technology sector. Pullbacks can be healthy; they present opportunities to buy inherently valuable stocks on the cheap. But you need to be selective.

Here are 10 signs to help you identify a value trap:

1) The stock is underperforming its entire sector. It’s one thing to decline along with the broader market; it’s another to perform worse than your peers.

3) Over-promising but under-delivering. Quarterly results are where the rubber hits the road. Beware of overly hyped companies with managers that talk a good game but then miss expectations repeatedly.

4) Insufficient cash flow to cover debt expense. The cash ratio helps discern a company’s ability to pay short-term debt obligations. It is calculated by dividing current assets by current liabilities. A ratio higher than one shows a solid chance of paying off debt; a ratio of less than one could indicate an unmanageable debt burden.

5) High levels of insider selling. If corporate insiders are dumping a stock, they know something that the rest of us don’t. It’s a tip-off that the people running the company realize that the stock is about to under-perform the market.

6) Over-dependence on a specific product. Apple (NSDQ: AAPL) made a fortune from its iPod; last week the company announced it was discontinuing the product because it had been superseded by the iPhone. Other companies aren’t as proactive when it comes to fading products that once served as blockbusters.

7) High turnover in the C-suite. When key executives don’t last very long and frequently jump ship, that’s a sign the company is rudderless and about to strike a reef.

8) Consistently trading at low multiples, versus key statistics such as earnings, cash flow, and book value. That’s an indicator of low future promise.

9) Lack of institutional investment. When a stock has high institutional ownership, it’s a vote of confidence from the “smart money.”

10) Dividend reductions. If a company you own has slashed its payout, watch for falling or volatile profitability. Beware of an excessively high dividend yield compared to peers.

Editor’s Note: If you’re a value hunter, I have good news. Our investment team has just uncovered the first “Apple” of the electric vehicle industry. One unusual company is secretly siphoning the EV industry’s trillion-dollar profits into investor accounts over and over again, like clockwork.

Now’s the time to buy this under-valued stock, before the investment herd catches on and bids it sky high. Click here for details.