I was playing Jenga with my twin six-year-old grandsons last night. Because covering the markets is my profession, I tend to see financial metaphors all around me. Our family fun time was no exception.

In Jenga, as you probably know, each block removed is placed on top of the tower, creating an incrementally more unstable structure. The game is over when the tower collapses, caused by either the removal of a block or its new placement atop the structure. The last player to complete a turn before the collapse is the winner.

While playing Jenga with the kids, it occurred to me: will the housing sector be the last block that brings down the vulnerable recovery? I’m not suggesting that we’ll see anything as dramatic as the sub-prime mortgage calamity of 2008. But new housing statistics this week underscored weakness in a wobbly economy.

Home is where the wealth is…

The PCE is the Fed’s preferred inflation gauge. Brace yourself for market-moving inflation data, just in time to possibly spoil your Memorial Day weekend.

Despite short-lived rallies, investor fear persists amid indications of a deceleration in economic growth. The Fed’s increasingly hawkish monetary policy is boosting borrowing costs for individuals and businesses. The Fed is trying to quell inflation without killing the recovery, a feat that’s known as a “soft landing.” But for the U.S. central bank, successfully executing such landings is rare.

The greatest asset for most America’s is the home, and buying one is getting more expensive. The rate for a 30-year fixed loan hovers at 5.27%, up from 3.29% at the start of the year.

Housing sector reports are leading indicators and as such, they get close scrutiny from investors. Leading indicators provide early hints of economic trends, and stock market analysts clamor for any signal as to what the future may hold.

Housing trends also exert a multiplier effect throughout the economy. And right now, the trends are worrisome. Sales of new single-family houses in the U.S. dropped for the fourth consecutive month, as potential home buyers grapple with a confluence of daunting factors.

According to data jointly released May 24 by the U.S. Census Bureau and the U.S. Department of Housing and Urban Development, new home sales fell to a seasonally adjusted annual rate of 591,000 in April, the lowest since April 2020, when the COVID pandemic was at its worst (see chart). 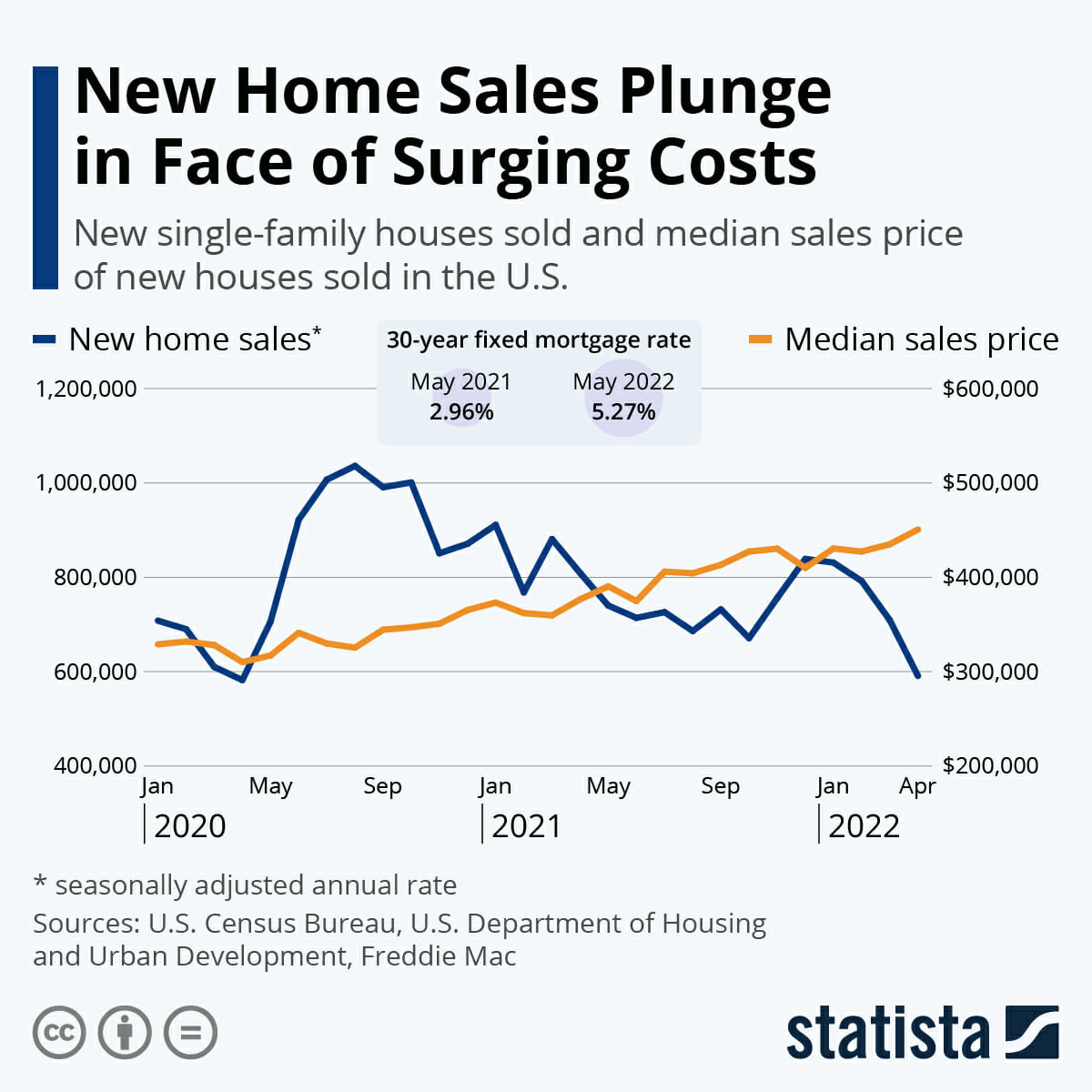 New home sales dropped 16.6% in April, as housing prices continued their sharp upward trajectory. The median price of new houses sold in April reached a record high of $450,600, marking a year-over-year increase of 20% and more than 45% from April 2020. The average sales price is even higher, at $570,300.

Add to this picture the surge in non-housing costs, and you have a scenario whereby consumers could get discouraged and pull back their spending.

About three-fourths of the U.S. economy is consumer spending, which greatly relies on sentiment. A pillar of consumer sentiment is the condition of the housing market. To be sure, Americans who already own a home are feeling wealthier. But prospective buyers are getting ruthlessly priced out of the market, and that’s demoralizing for people who want their share of the American dream.

The resilient consumer has helped keep the stock market correction from becoming a crash. But history shows that the housing sector has been the source of consumer pain that leads to financial routs.

However, there’s a recession-resistant industry that cares little about interest rates or new home sales. It’s called marijuana. That’s right…weed. And it’s one of your biggest profit opportunities.

The legalization of marijuana around the world is nothing short of a cultural and financial revolution. Want to make money in pot stocks? Consider reading my new book: The Wide World of Weed and Psychedelics. It’s your definitive guide for outsized gains in the thriving cannabis and psychedelics industries. Click here to get your free copy.