Marijuana and Money: An Insider Interview

My colleague Brad Briggs this week suggested that he interview me about the booming marijuana industry. The article below is a condensed version of our discussion.

Brad Briggs is the managing editor of Investing Daily’s subsidiary, StreetAuthority. A veteran of the financial publishing industry, Brad manages the team of writers and editors responsible for several premium newsletters, as well as free online content.

Upon the publication of my new book, The Wide World of Weed and Psychedelics, Brad decided to ask me questions about the increasing legalization and money-making opportunities in marijuana and its ancillary industry of psychotropic substances. I can always count on Brad for incisive thinking. His questions are in bold.

First of all, John, congratulations on the launch of your book. What led you into this corner of the stock market in the first place?

This “green rush” is feeding an investor frenzy, reminiscent of the 19th century gold rush. We’re witnessing enormous investor excitement over a multitude of marijuana plays.

Problem is, many of these plays are tiny penny stocks that generate neither earnings nor revenue. Gullible investors who indiscriminately pile into the pot sector will see their money go up in smoke.

I wanted to point investors in the direction of the right marijuana investments. Investors who jump aboard quality pot companies in their formative stages are reaping life-changing profits. But they need guidance. Hence my interest, and ultimately, my book.

What’s the current state of legalization efforts in the U.S., and what kind of market opportunity are we talking about here?

Marijuana is transitioning from counter-cultural act of youthful rebellion to mainstream capitalism. It’s still outlawed at the federal level, but increasing numbers of states are legalizing Mary Jane for medicinal as well as recreational use.

The latest legalization efforts bring the total of legal adult-use states to 18, along with the District of Columbia. There are currently 37 states that have medical marijuana laws, including all that allow recreational use. Take a look at this map: 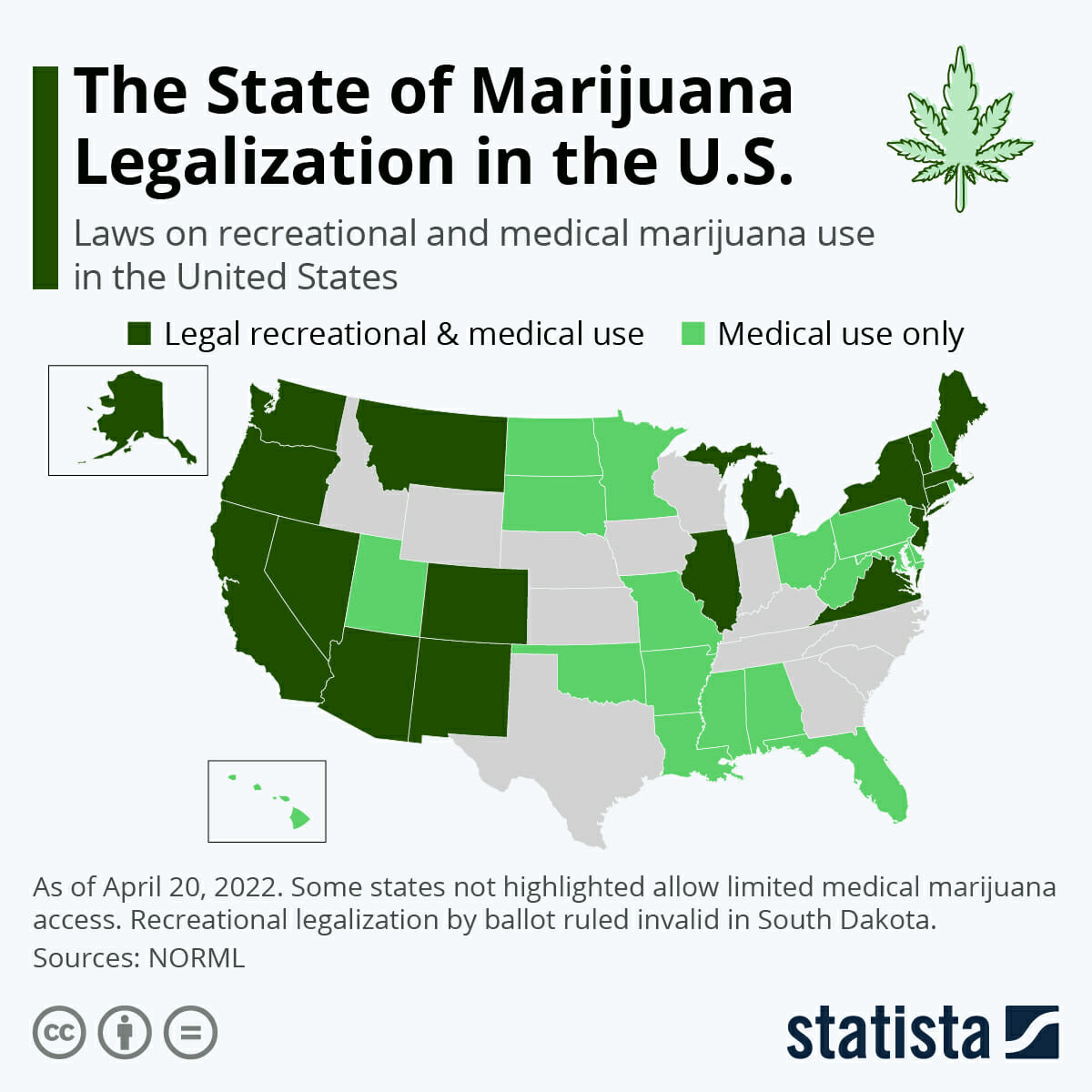 Keep in mind, the marijuana industry’s growth is a global phenomenon. Research firm BDSA recently estimated that global cannabis sales reached $30.6 billion in 2021, for both recreational and medical varieties. BDSA projects that worldwide pot sales will more than double to exceed $62 billion by 2026.

How big is marijuana in the United States? A new study released this month shows that marijuana is more popular with American consumers than the food and beverages sold by coffee behemoth Starbucks (NSDQ: SBUX).

The numbers are all the more striking, when you realize that coffee is legal everywhere, whereas marijuana is banned on the federal level and in several states.

Also noteworthy is how pot sales in the U.S. exceeded Starbucks sales in all of North America. The green mermaid is losing out to the green rush.

The legalization of psilocybin fungi (aka “magic mushrooms”), LSD, and other psychedelics also is accelerating on a global basis, for recreational and medicinal purposes. It’s a brave new world, Brad.

By now, our readers have undoubtedly heard about medical marijuana. But what does the research actually say?

Medical marijuana is one of the hottest corners of the biotechnology sector for investors. The potential this apparent wonder-herb packs for alleviating symptoms of countless diseases, as well as its curative properties, makes biotech companies developing cannabis-based treatments among the most exciting and potentially lucrative investment opportunities today.

Despite the demonization of weed by authorities for decades, a growing body of empirical scientific research shows that marijuana confers physical and psychological benefits.

There’s a significant need for new painkilling medicines and cancer treatments that mainstream pharmaceutical giants aren’t meeting. That’s why Big Pharma is pouring billions of dollars into medical marijuana research, as well as the acquisition of smaller innovative marijuana biotechs.

You just mentioned that cannabis stocks can be “risky.” If so, is the risk worth it?

Stock picking is particularly treacherous in the cannabis industry. Marijuana poses huge investment opportunities, but you need to be careful.

Corporate marketing in the marijuana industry often lapses from hyperbole into outright fraud. Many marijuana penny stocks are aggressively promoted, even though they have lousy fundamentals.

That’s why, when researching a stock in any industry, I dig deep into earnings estimates, to look under the hood, so to speak, to gauge the true source of earnings growth. The volatile marijuana industry requires extra effort, but the pay-off can be gigantic. My book, The Wide World of Weed, pinpoints cannabis stocks that I’ve recommended in the past that eventually soared.

Are there side-plays, so-called “pick-and-shovel” plays, on the trend?

I especially like the pick-and-shovel plays on the marijuana boom. These companies aren’t necessarily about growing marijuana nor are they developing cannabis-derived drugs. They’re infrastructure stocks that can be wildly profitable.

You can seek greater safety (and profits) by focusing on the ancillary firms that provide infrastructure services for growing pot companies in either the recreational or medical segments.

Pick-and-shovel plays can be reliable money-makers, because they provide essential value-added services. What’s more, they usually enjoy a diversified roster of clients in several different industries, which buffers them from the inherent volatility of the marijuana business. If you seek market-beating growth opportunities without aggressive risk, pick-and-shovel marijuana equities are excellent choices. But again, selectivity is key.

A Note From Investing Daily’s Publisher: The investment trends that John Persinos has just described to Brad Briggs are resistant to recession, rising interest rates, geopolitical turmoil, and other risks that currently bedevil investors. That’s why I urge you to read John’s new book: The Wide World of Weed and Psychedelics. It’s your definitive guide for making money in the thriving cannabis and psychedelics industries. Click here to get your free copy.