When Stocks Take The Elevator

One afternoon in 1987 when I worked as a financial editor in a Manhattan skyscraper, I got trapped with my colleagues in an elevator near the 40th floor. After about 20 harrowing minutes, the elevator gave a lurch and resumed moving. We laughed in relief.

Later that same year, on “Black Monday,” the markets rode the elevator…and crashed right into the basement.

Market volatility lately has reminded me of an old Wall Street adage: The market takes the stairs up and the elevator down. That’s a metaphorical way of saying the market tends to drop faster than it rises. We’ve seen this dynamic play out in recent weeks and it’s likely to continue as the second half of 2022 unfolds.

The cycle of good news/bad news is generating extreme daily (and intraday) swings. One day, Russia indicates it wants to negotiate an end to the Ukraine war. Stocks rise. The next day, Russian President Vladimir Putin threatens Europe with nuclear weapons. Stocks plunge. One day, Federal Reserve Chair Jerome Powell says…well, you get the idea.

The roller-coaster action continued on the final trading day of May. On Tuesday, after a week of powerful gains, the major U.S. stock market indices declined as follows: the Dow Jones Industrial Average -0.67%; the S&P 500 -0.63%; the NASDAQ -0.41%; and the Russell 2000 -0.80%. In pre-market futures contracts Wednesday, all four indices were trading in the green.

Fears of inflation continue to roil markets. Last Friday, the Commerce Department reported that the personal consumption expenditures (PCE) price index rose 6.3% in April from a year earlier, below a four-decade high set in March. The reading marked the first slowdown since November 2020, but prices still remain elevated to a worrying degree.

Bond prices have been under pressure, as rates climb dramatically due to rising inflation and tighter monetary policy. The benchmark 10-year Treasury yield has approximately doubled over the first four months of 2022 (it currently hovers at 2.86%).

Last week, government data showed that Americans consumers continued to spend in April, dipping into their savings to do so. The earnings disappointments from a few big retailers largely derived from cost pressures rather than weakness in consumer spending. However, inflation is causing a divergence in shopping patterns. Lower-income consumers are gravitating toward discount stores and cheaper brands.

Putting the squeeze on Putin…

Crude oil prices have been moving higher, in the wake of the European Union’s announcement on Monday that the 27-nation trading bloc will ban most imports of Russian oil (see chart). 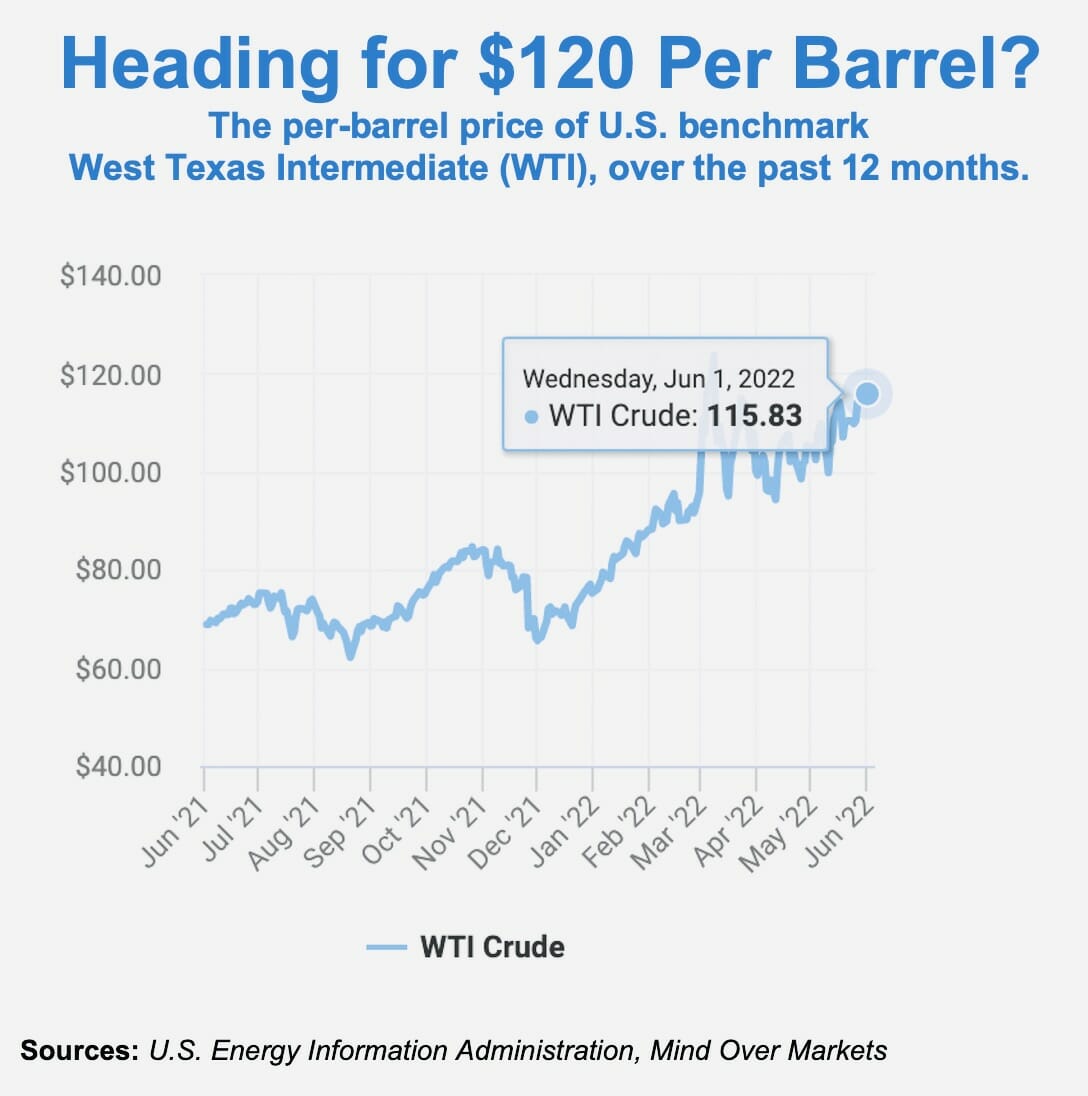 EU leaders agreed to slash Russian crude oil imports by as much as 90% by the end of 2022. It’s the harshest Western penalty on Russia yet, in retaliation for its invasion of Ukraine.

Putin’s war machine is largely financed by energy production. The EU must now decide what to do about Russian natural gas. The U.S. banned all Russian energy imports in March.

Soaring crude oil prices and a recovering economy are helping the energy sector post the stock market’s biggest gains so far in 2022. An even stronger performance for energy equities probably lays ahead.

A healthy energy sector denotes overall economic health, but crude prices have been rising to the extent whereby inflation has become worse.

In an interview with CNBC Wednesday, U.S. Treasury Secretary Janet Yellen excoriated oil companies for sitting on leases and not drilling on them. She said high oil prices provide “ample incentive” for companies to produce more oil, which would in turn help stabilize crude supply-and-demand and ease inflationary pressures.

Until we get clarity on inflation and other headwinds, we’re in for more nerve-wracking elevator rides.

Up, down, sideways… even in the face of rising interest rates… tech selloffs…overseas war…and anything else this volatile market throws at you, Robert’s trades are income-generating machines. Click here now for details.