The Big Story was a television series, airing in the late 1950s, that dramatized the true stories of real-life daily newspaper reporters. As a kid, I loved watching re-runs of the show and it helped spur me to eventually become a newspaperman.

The “Big Story” right now, and for several months to come? Without a doubt, inflation. Below, I’ll steer you in the direction of investment techniques that not only reap income, but also combat inflation.

After a May that saw stocks wildly gyrate and the S&P 500 come within a whisker of a 20% bear market, stocks closed lower on the first trading day of June. In pre-market futures contracts Thursday, stocks were trading in the green. The seesaw action is likely to continue into the summer.

Inflation fears have pushed the 10-year U.S. Treasury yield to 2.9% (as of this writing). Major international indices have been trending lower, as overseas investors fret about inflation and sputtering growth.

Inflation is a global phenomenon; it’s not just President Biden’s headache. And despite what you may be hearing on partisan media, inflation is not the result of domestic political policies in the U.S. If it were, inflation wouldn’t be spiking around the world.

Eurozone inflation reached a record 8.1% in May (estimated), amid surging energy and food costs. Annual inflation in the 19 countries that use the euro currency surged past the previous record of 7.4% reached in March and April, according to the latest data reported Tuesday by the European Union statistics agency, Eurostat (see chart). 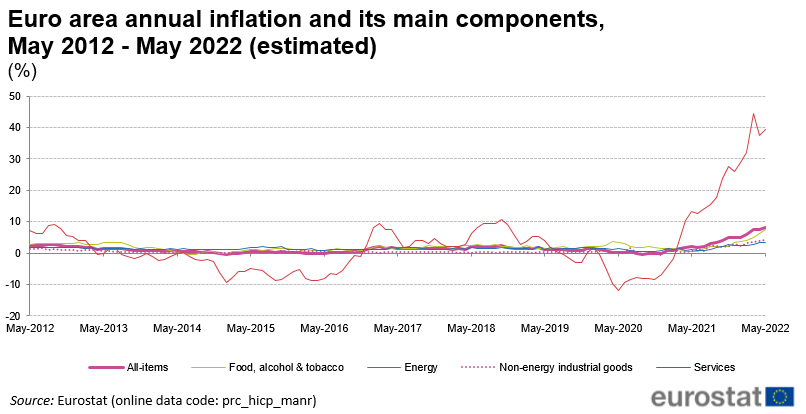 The U.S. consumer price index (CPI) edged down to an 8.3% year-over-year rate in April, a welcome downward trend in inflation but still worryingly high. The unpredictable Mr. Putin and his war of choice against Ukraine bears much of the blame.

The Russia-Ukraine war is wreaking havoc with supply chains, causing shortages of vital commodities, and sending energy prices sharply higher. The latest eurozone stats reveal that energy prices spiked in May by an astonishing 39.2%. The global commodities “super cycle” is firmly entrenched.

Like superstitious priests in the ancient world, investors are parsing every utterance from the Federal Reserve, every jobs report, every leading indicator, every battlefield event in Eastern Europe, to divine the direction of inflation, which in turn would provide clues as to whether the U.S. central bank can take a less (or more) aggressive tightening stance than what investors already expect.

By allowing up to $95 billion in bonds to mature every month without getting replaced, the Fed will be sucking liquidity out of the financial system, which together with rate hikes will function as another means of tightening the monetary spigot.

I expect long-term bond yields to edge higher, but as with stocks, the majority of the adjustment might already be behind us, as long as inflation starts to moderate soon. But inflation’s path is highly uncertain, especially with sanctions against Russia causing energy supply-and-demand imbalances in Western Europe and around the globe.

The “transitory” school of inflation has been proven wrong. Among card-carrying members of this club were Fed Chair Jerome Powell, U.S. Treasury Secretary Janet Yellen, and Nobel Laureate Paul Krugman. Inflation has proven stickier than most analysts thought.

If you haven’t done so already, you need to inflation proof your portfolio…pronto. Which brings me to my colleague, Dr. Joe Duarte.

Dr. Duarte is the chief investment strategist of our premium trading service, Weekly Cash Machine. His inflation-proof income summit is “on air” now. You don’t want to miss his latest insights. He’ll show you, step-by-step, how to make investment moves that repeatedly cash in, week after week.

The techniques you’ll learn on this summit can help you simultaneously fight inflation and generate robust income. I call that a “Big Story.” Click here to grab your spot.