Psychotropic Profits: Totally Out There

Psychotropic substances such as marijuana and psychedelics have evolved in the public imagination from insidious corruptors of youth to establishment-sanctioned tools in the fight against harmful addictive substances.

The Johns Hopkins School of Medicine is currently seeking volunteers to join a study of the efficacy of psychedelics in helping people quit the tobacco cigarette habit. The prestigious medical school states that the new study involves:

“…ingestion of psilocybin, a psychoactive substance found in psychedelic mushrooms that have been used as a sacrament in various cultures. Some research studies have suggested that psychedelics, when administered under interpersonally supportive and well-prepared conditions, may be effective in helping people overcome addictions.”

Meanwhile, a new white paper published in the May 9 issue of the Journal of Adolescent Health shows that marijuana use by young adults actually decreases their likelihood of using alcohol, nicotine, and non-prescription opioids.

These findings are in stark contrast with the “gateway drug” misconception of marijuana and psychedelics that has persisted for decades. As the nation continues to grapple with the opioid crisis, it’s significant that an increasing body of research proves that accessibility to cannabis or psychedelics significantly reduces opioid use and deaths.

At stake are billions of dollars in potential pharmaceutical treatments. We’re already seeing a proliferation of start-up biotechs exploring the field. Venture capitalists, individual investors, and Big Pharma are scrambling to get a piece of the early action.

How do psychedelics such as psilocybin make you feel? Participants in several recent Johns Hopkins medical studies described their experiences this way (see the infographic): 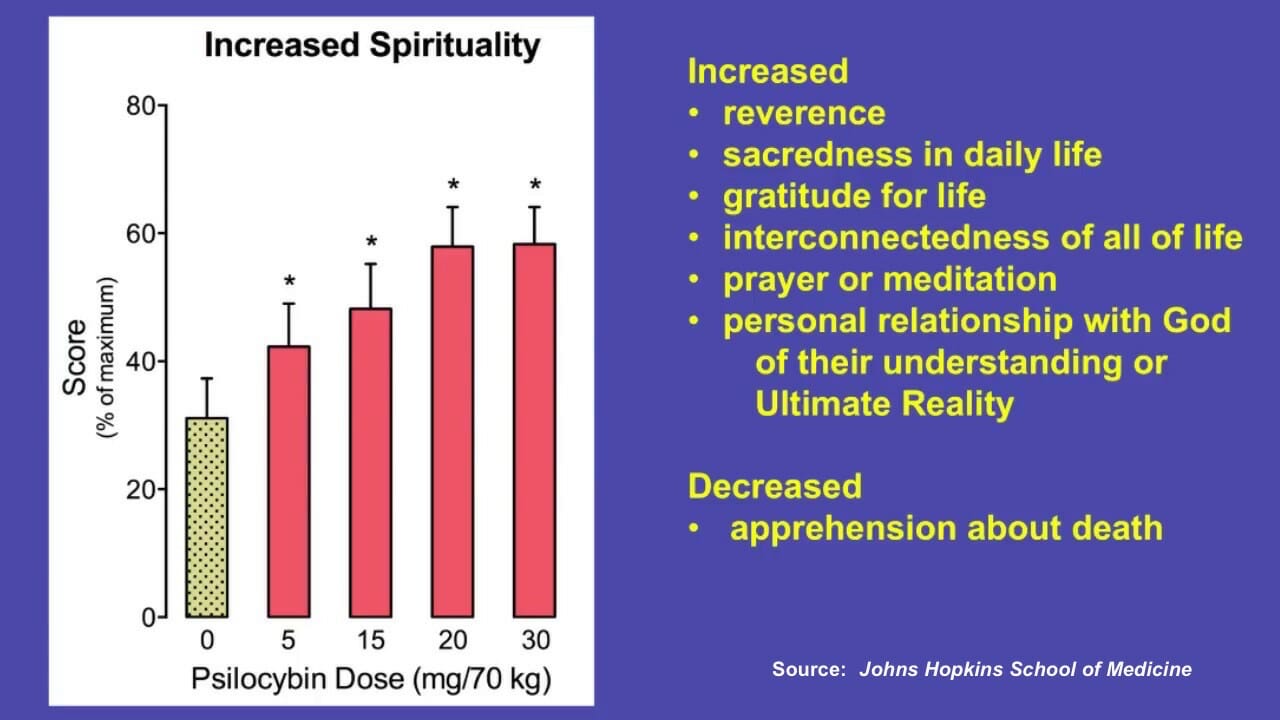 Psychedelic drugs remain illegal at the federal level and in most states. But there’s been a surge of clinical trials in recent years testing illicit psychedelic drugs such as psilocybin, LSD, peyote, mescaline, ketamine, and MDMA (also known as ecstasy) to treat mental-health disorders, generally with the close supervision of a psychotherapist. Psychedelics also are rising in public acceptance and jurisdictions around the world are lifting restrictions against them.

Denver, Colorado in 2019 became the first jurisdiction in the U.S. to decriminalize psilocybin fungi. The historic legal change propelled a surge of similar efforts from coast to coast.

At the same time, marijuana is becoming normalized in our culture to the point where only 8% of Americans still believe that marijuana should remain illegal.

Marijuana already has become an entrenched, multi-billion-dollar industry. And now psychedelics is emerging into a nascent sector, with mega-cap global pharmaceutical firms implementing sweeping programs to commercialize these mind-bending substances.

It’s clear that a unified approach toward marijuana is urgently needed. State by state, marijuana is slowly but surely being legalized, whereas efforts to amend its federal ban remain stifled in the U.S. Senate.

Against this backdrop, lawmakers, government regulators, trade associations, and businesses met on June 6 for a two-day conference to map out a logical future for the mainstreaming of marijuana.

The conference was organized by the non-partisan Cannabis Regulators Association (CANNRA). Participants strategized on a variety of marijuana-related topics, including:

Marijuana is a growth industry, regardless of the Senate’s foot-dragging on federal legalization. The same applies to psychedelics, which convey even greater growth opportunities because the mainstreaming of substances such as LSD and “magic mushrooms” is a newer phenomenon.

But there’s a lot of investment hype and fraud bedeviling these new industries. You need to pick the right stocks. For investors, lack of due diligence usually results in a bad trip.