My endlessly patient wife Carole accuses me of suffering from a mild form of OCD. She’s not wrong.

Because I follow the markets for a living, an incessant feed of financial news lights up my desktop and smartphone. CNBC plays on the flat screen TV in my home office (although I mute the nattering “pundits”). I’m hyper-aware of my personal investment balances and my stock picks, for better or worse.

The key is to remain unemotional and coldly rational, even in the face of sharp selloffs. But we’re only human, and this bear market is depressing for even the most seasoned investors. Below are a few tips for surviving the bear market blues.

The “wealth effect” takes a hit…

The tendency of consumers to spend more when their investment balances are higher is called “the wealth effect.” Watching 401k and Individual Retirement Accounts (IRAs) grow because of robust gains in stock and bond portfolios feeds consumer confidence, which in turn promotes more spending, which becomes a virtuous cycle.

But of course, the reverse also is true. And that’s what we’re seeing now. The market slump has deepened, as investors fret that the Federal Reserve’s tightening will tip the economy into a recession.

Research conducted by Goldman Sachs (NYSE: GS) shows that bear markets triggered by adverse events have ended faster and staged recoveries that were quicker than those caused by cyclical movements or structural problems (see chart). 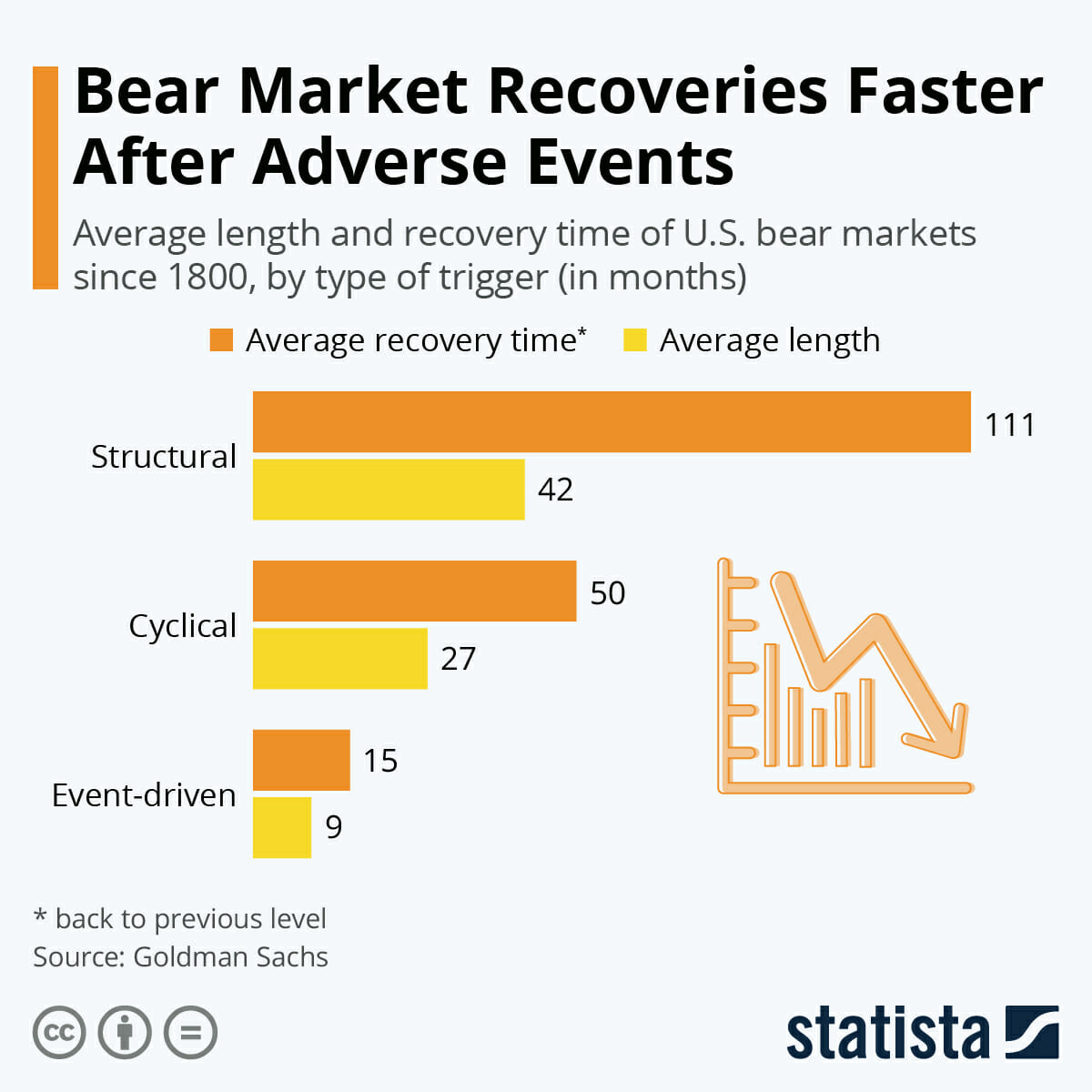 Read This Story: Musings on a Bear Market

As the stock market’s lapse into bear territory shows, big gains can quickly revert to swift losses. That’s why, to keep your retirement strategy on track, you should tie your personal spending to a fixed budget, not a fluctuating brokerage balance.

While it might feel nice to splurge in fancy restaurants when the S&P 500 is surging, you’ll feel doubly bad staying home eating leftovers during a bear market. It’s best to keep your personal spending steady, in good times or bad, in bull or bear markets.

Basing your spending or retirement decisions on the ups-and-downs of the stock market is a plan that leads to misery. You should create “buckets” for investments based on your own spending forecasts. Move money around from a “most invested” bucket to a “least invested bucket,” based on how soon you plan on spending that money.

The less invested buckets should be more conservative, by holding cash, bonds, and ETFs and mutual funds focused on income and capital preservation. The long-term holding plan for this bucket allows you to weather market storms.

It’s unwise to plow all your savings into the market in one lump. Adding a fixed dollar amount monthly will automatically help you average into stock prices over time.

The same applies for retirement savings. A young person will likely have most of his or her savings in stocks and growth vehicles. However, as the person ages, a portion of those savings should be moved to less risky buckets.

The goal is to reduce volatility in your investment balance as you get closer to retirement. You don’t want to discover that a sum of money you planned on spending next month suddenly disappeared during a market pullback.

If you’ve incrementally increased your exposure over time to bonds and dividend ETFs or mutual funds, your portfolio should generate a healthy supply of reliable income. A “steady eddy” plan will allow you sleep better in the years leading up to your retirement.

The man behind the Dividend Multiplier…

Are you struggling with the bear market blues? My colleague Robert Rapier can provide a remedy. Robert boasts a track record of generating outsized income, regardless of market conditions.

As the chief investment strategist of Rapier’s Income Accelerator, Robert has devised an investing method that allows him to extract multiple payments from the same stock over and over again, whether the broader market is going up, down or sideways.

Robert calls it his “Dividend Multiplier” and it has reaped steady riches for his followers. Armed with his money-making system during the bear market, you’ll not only survive…you’ll also thrive. Click here to learn more.