The Case for Covered Call Writing Just Got Stronger

I spent last weekend with more than 40 extended family members at our biannual Pearce family reunion in Lewes, Delaware. Actually, we last convened in 2019 due to the coronavirus pandemic so we had a lot of catching up to do.

Since most of my cousins are my age or older, they want to know how they could increase their incomes in retirement. Three years ago, I explained to them how writing covered call options is a good way to do that.

Since then, a lot has happened. The pandemic triggered a huge infusion of cash into the financial markets. In turn, inflation spiked and now the Federal Reserve is aggressively raising interest rates to bring it under control.

That got me wondering how well covered call writing has worked out during an especially difficult time. To do that, I looked at the performance of the Global X S&P 500 Covered Call ETF (XYLD). 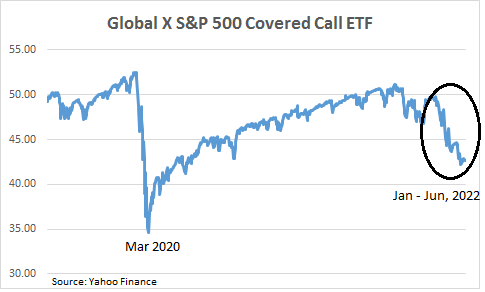 At first glance, it would appear that owning SPY over the past three years would have been a far better choice than owning XYLD. However, that comparison ignores dividends.

Including dividends, SPY’s total return (share price appreciation plus dividends paid) of 34% is still superior to the 7% gain posted by XYLD. However, SPY’s average dividend yield of less than 2% would not have done much good for income investors.

That is where XYLD has a clear advantage. Its trailing 12-month yield of 12.5% is far higher than what any stock or bond is paying these days.

There is another factor to consider when evaluating XYLD’s recent performance. Since it is based on the S&P 500 Index, its share price performance is heavily influenced by the same mega-cap tech stocks that have been taking a beating this year.

More than 20% of XYLD’s portfolio consists of Apple (NSDQ: AAPL), Microsoft (NSDQ: MSFT), Amazon (NSDQ: AMZN), Alphabet (NSDQ: GOOGL), and Tesla (NSDQ: TSLA). Each one of those stocks is down significantly this year.

I don’t think that will remain the case much longer. The shock of higher interest rates will soon dissipate, as will the global supply chain bottlenecks inhibiting economic productivity. When that happens, those same stocks could rally strongly.

The options market appears to agree with me. Last week while Apple was trading near $136, the call option that expires on December 16 at the $140 strike price was selling for $12.

That works out to an options premium yield of about 9% plus appreciation of 3% over the next five months. On an annualized basis, that equates to a total return of roughly 29%.

The same math produces similar returns for the other large holdings in the portfolio. But even if these stocks don’t appreciate, the option premiums are real money that can be distributed to shareholders as current dividends.

That is why I still believe that covered call writing makes sense for income investors. As long as you are only spending the income generated by time premiums, you can’t outlive your principal.

The same statement cannot be said for any strategy that is dependent on capital appreciation for current cash flow. You may not think that is a problem while you are working, but once you retire it can be a fatal mistake if the stock market goes into a prolonged slump.

Go Out of the Money

The key to a successful covered call writing strategy in retirement is to only write out-of-the-money options. That means the strike price of the option is higher than the current price of the underlying security.

For example, last week while oil “supermajor” Chevron (NYSE: CVX) was trading near $140, the call option that expires on December 16 at the $155 strike price could be sold for $8. That money is yours to keep no matter which direction CVX goes over the next five months.

If CVX rises above $155 prior to the option’s expiration then it will be called away from you at that price. In that case, your gain over those five months would be $23 ($15 share price appreciation plus $8 option premium).

That equates to an annualized return of 39% on the $140 current share price. In addition, you get to keep any dividends paid to you while you are the shareholder of record.

If CVX never rises above $155 by the time this option expires, then you get to keep the option premium and your shares. At that time, you can write another covered call and repeat the process. I’ve heard many stockbrokers say that this approach is the closest thing they’ve ever seen to printing money.

Of course, there is a downside risk to this strategy. If CVX skyrockets back above $180 later this year, then you lose out on any appreciation above the $155 strike price.

In my opinion, that is a small price to pay if generating income is your top priority. Share price appreciation is nice, but you can only pay the bills with it by selling your stock. And once you’ve done that, the opportunity to write covered calls against it is gone.

That’s why I suggest you take a look at what my colleague, Robert Rapier, has accomplished for members of his Rapier’s Income Accelerator investment service.

An expert on covered call writing, Robert Rapier can show you how to squeeze up to 18x more income out of dividend stocks, with just a few minutes of “work” each week. Click here for details.