As I made the rounds of July 4 picnics this past holiday weekend, I noticed a wide variety of cannabis-infused foodstuffs, encompassing burgers, hot dogs, barbecue sauce, condiments, snacks, desserts, beverages…you name it. I even saw coolers full of cannabis beer.

It’s still something of a shock to me when I witness firsthand how marijuana pervades the daily rituals of average American life. The pot revolution really hit home last weekend, when a friend manning the grill casually asked me: “Wanna a weedburger?”

Dispensaries throughout the U.S. reported a spike in cannabis sales over the July 4 three-day holiday weekend. But it’s not just Independence Day. Other major holidays, e.g. Labor Day, Thanksgiving, and Christmas, also are witnessing surges in retail pot sales.

According to data compiled by marijuana software company Akerna, these were the top sales days for legal cannabis in the U.S. in 2021:

As the state-level legalization of marijuana proliferates, consumers are publicly and unabashedly including marijuana in their holiday festivities.

I never thought I’d live to see cannabis become “family friendly” for holiday get-togethers, but that’s exactly the case, in many cities and suburbs from coast to coast.

Last year, July 4 weekend sales of cannabis flower jumped by 8% compared to the previous weekend, while sales of pre-rolls swelled by nearly 11%. The sales figures for July 4 this year are still being tabulated, but they’re projected to break records.

Watch This Video: The Market Power of Cannabis Flower

“Flower” refers to the smokeable, leafy part of a cannabis plant. In the burgeoning marijuana industry, flower is dominant.

The data suggest that, although loose flower represents the majority of flower purchases, consumers are turning to pre-rolls for greater flexibility, convenience, and social sharing.

The green rush in the Golden State…

The huge, fast-growing cannabis market of California is a compelling case study of these consumer trends.

California is the most populous state in the union and sports the largest legal and illicit cannabis market in the U.S. The Golden State legalized medical cannabis in 1996 and recreational use in 2016. Combined legal sales there totaled nearly $5.9 billion in 2021 and are projected to reach $9.25 billion by 2030, according to New Frontier Data. Cannabis also is the state’s largest cash crop.

In 2021, legal sales of flower in California over a weekly basis remained roughly consistent, with Fridays and Saturdays routinely posting the most flower transactions, accounting for 17% and 15% of weekly totals, respectively. Mondays and Tuesdays represented the lowest proportions of sales, with each representing 13% of average weekly transactions. 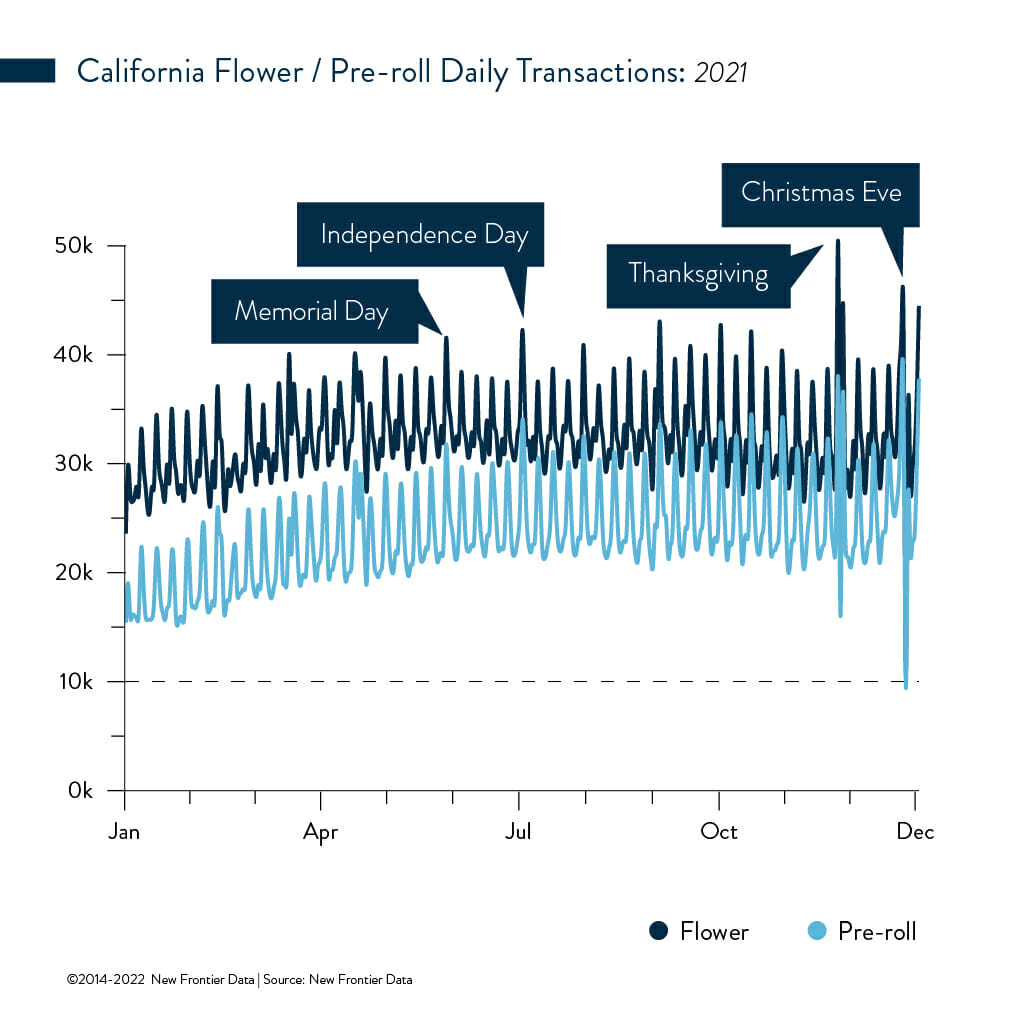 “The broadening availability of value-added products and fragmentation of use makes it especially important for flower brands to understand how consumers make purchasing decisions, identify for which applications their flower products are best suited, and align their marketing and brand-positioning to reflect the applications and intentions which best align with their target audiences’ intended uses.”

Want to profit from the trends I’ve just described? I urge you to read my new book: The Wide World of Weed and Psychedelics.

Marijuana represents a powerful investment megatrend. As legalization of marijuana gathers momentum around the world, sales of weed are skyrocketing and investors are getting rich. But pot stocks can be risky; you need to be selective.

Hence my book. It’s your definitive guide for making money in the thriving cannabis and psychedelics industries. Click here to get your free copy.