The Big Biotech Story of 2023? Psychedelics (No, Really)

To understand the hottest trend right now in biotechnology research, you must travel back 80 years. The scene is a laboratory in the Swiss Alps, surrounded by the cataclysm of World War II. A solitary chemist is working diligently to find new drugs.

Hofmann ingested 250 micrograms and became the first person to take an LSD trip. The drug kicked in while he was riding his silver bicycle, hence the famous reference to a silver bike in Donovan’s 1966 song Fat Angel, an ode to LSD.

Hofmann, who was a shy man, reported the mind-blowing effects to colleagues. He later commented in his memoirs: “I see the true importance of LSD in the possibility of providing material aid to meditation aimed at the mystical experience of a deeper, comprehensive reality.”

After World War II ended, the pharmaceutical industry (and the CIA) knocked on Hofmann’s laboratory door.

The first wave in substantial psychedelics research and application occurred in the 1950s and 1960s, when pioneers such as Timothy Leary pursued groundbreaking studies and brought public renown to LSD and psilocybin, the psychoactive substance in magic mushrooms. U.S. spy agencies also sought (unsuccessfully and scandalously) to weaponize the drug.

But starting in 1970 and for the ensuing half century, the field of psychedelics lay dead in the water, a victim of the War on Drugs.

Today, that’s rapidly changing, as a new generation of “psychonauts” (as they sometimes call themselves) comes to the fore. Think of it as Psychedelics 2.0.

We’re in the midst of the second wave in psychedelics, a dynamic that is poised to accelerate in 2023 and over the next decade. The potential for social change, as well as for investment profits, are enormous. I’ll get to the financial angle, in a minute.

The Johns Hopkins seal of approval…

Psychedelics are shedding their countercultural baggage and becoming respectable. These drugs have evolved from acid heads in Haight-Ashbury to technicians in lab coats.

The latest case in point: The Johns Hopkins Center for Psychedelic and Consciousness Research recently announced significant new initiatives into the study of psychedelics.

The Johns Hopkins center has launched a study to assess whether psilocybin is safe and effective for improving fatigue, pain, mood, and quality of life in people with post-treatment Lyme Disease.

Lyme Disease, which is spread by ticks, can be debilitating, with symptoms that include fever, swollen joints, tiredness, rashes, loss of muscle movement, severe headaches, and heart palpitations. No human vaccines for Lyme Disease are currently available.

In the field of medical research, Johns Hopkins is as prestigious as it gets. The Johns Hopkins center also announced that it’s seeking volunteer participants for continuing studies of psilocybin in Anorexia Nervosa, Alzheimer’s Disease, and co-occurring alcohol use and depression.

Once upon a time in America…

In the early to mid-1960s, psychedelic drugs and marijuana were widely associated with peace, love and understanding. To the middle class, long-haired hippies seemed harmless. But the 1967 Summer of Love morphed into the 1969 Manson murders. By the end of the decade, as the social fabric frayed and street violence erupted, the public mood darkened toward psychedelics, pot, and the people who partook of these drugs.

The embrace of psychedelics by anti-war activists, non-conformists, and the New Left prompted the authorities to launch a crackdown, not to fight a health scourge as purported, but to exert social control. President Nixon couldn’t ban protest, but he could use drugs as a pretext to persecute his political opponents.

Along with marijuana, psychedelics were banned at the federal level as “Schedule I” drugs by the Controlled Substances Act of 1970. Government propaganda discredited these drugs as extremely dangerous. Thousands of promising clinical studies on psychedelics were buried and forgotten.

But over the past five years or so, the ice has begun to thaw. The movement to legalize marijuana has accelerated, prompting the scientific establishment to reexamine psychedelics.

For psychedelics, the decades-long “dark age” has given way to a renaissance.

Marijuana and psychedelics remain banned at the federal level, but an increasing number of states and localities are lifting restrictions on pot, LSD, psilocybin, and other psychoactive substances. After landmark victories in Oregon and Colorado, the campaign to expand public access to psychedelic drugs is now moving to additional states in 2023.

WATCH THIS VIDEO: Interview With a Top Financier Behind The “Green Rush”

Many biotech firms that are researching psychedelics also are looking into marijuana. Indeed, some scientists apply a broad definition of psychedelics that includes cannabis, even though weed’s compounds and effects on the brain are very different from those of “classic psychedelics” such as LSD and psilocybin. (The term “psychedelic” derives from the Greek for “mind-manifesting.”)

Let’s discuss these trends in terms of cold hard cash. According to the latest research by InsightAce Analytic, the global psychedelic therapeutics market was valued at US$ 3.61 billion in 2021, and it’s projected to reach US$ 8.31 billion by 2028, for a compound annual growth rate of 13.2% during the forecast period of 2022-2028.

The InsightAce Analytic report anticipates a surge in psychedelic drug approvals and new product launches, as well as rising financial investment in research.

The following chart shows the status of psychedelic clinical trials with the U.S. Food and Drug Administration (FDA), according to treatment goals: 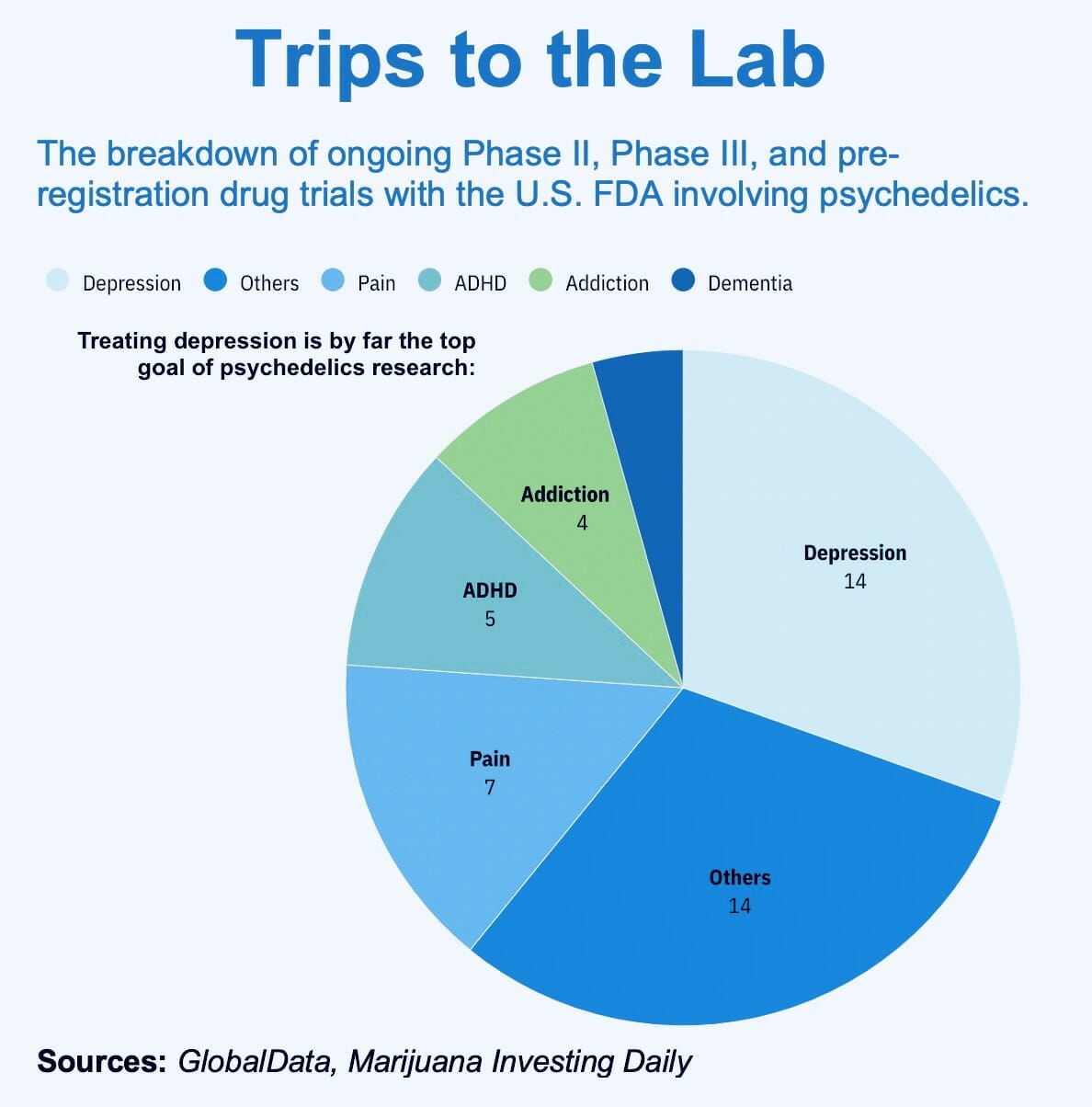 Intriguingly, much of this research is highlighting how psychedelic drugs occupy the nexus of science and spirituality. The empirical properties of psychedelics (e.g., alleviating depression or physical pain) can’t be separated from the mystical insights gleaned from “tripping.”

We’re seeing the mainstreaming of psychedelics into society and culture, not just medicine. The investment opportunities are vast.

Meanwhile, the canards about psychedelics are falling by the wayside. Doctors are telling us that it’s impossible to die from an overdose of LSD or psilocybin. Neither drug is addictive, and emergency room admissions because of psychedelics are extremely rare.

Yes, the proverbial “bad trip” can occur (depending on that individual’s psychological makeup or mood at the time), but there are no recorded instances of them occurring in controlled settings under the guidance of counselors or psychotherapists.

We’ve come a long way since Hofmann’s bicycle “trip.” Don’t leave money on the table. You need to invest in the massive, unstoppable trends I’ve just described. That’s why I urge you to read my new book: The Wide World of Weed and Psychedelics.

My book is your definitive guide for making money in the thriving cannabis and psychedelics industries. Want to catch the second wave? Get your copy of my book.

I also urge you to subscribe to my premium trading service, Marijuana Profit Alert. In this service, I provide specific, actionable investment guidance in the biggest biotech story of a generation.

As 2023 unfolds, an increasing number of U.S. states (and countries around the world) will legalize cannabis and psychedelics, which in turn will create new markets, new sales, and big profits for the investors who act now.