Instead of an interest rate pivot, the Federal Reserve just handed us a stock market divot.

At the conclusion of its two-day meeting Wednesday, the Federal Reserve’s policy-making arm, the Federal Open Market Committee (FOMC), announced that it was hiking interest rates by 75 basis points (bps), to an upper bound range of 3.5%. It was the central bank’s third consecutive hike of 0.75%.

Wall Street had expected a hike of that magnitude, but Fed Chair Jerome Powell and his cohorts made it clear that they won’t blink in the fight against inflation and their stance would remain tough, despite the resultant economic pain.

As is usually the case, Powell showed an unfortunate propensity for talking down the markets. As the Fed tries to play catch-up with inflation, it seems to have painted itself into a corner. It wants to get tough with inflation, but it doesn’t want to kill the economy and spook the markets. But on Wednesday, investors were indeed spooked.

The FOMC pointed to the front-loading of additional rate hikes, with the median policy maker seeing increases of 125 bps through the end of the year, for a goal of 4.6%. The following chart shows the target rate path since 1974: 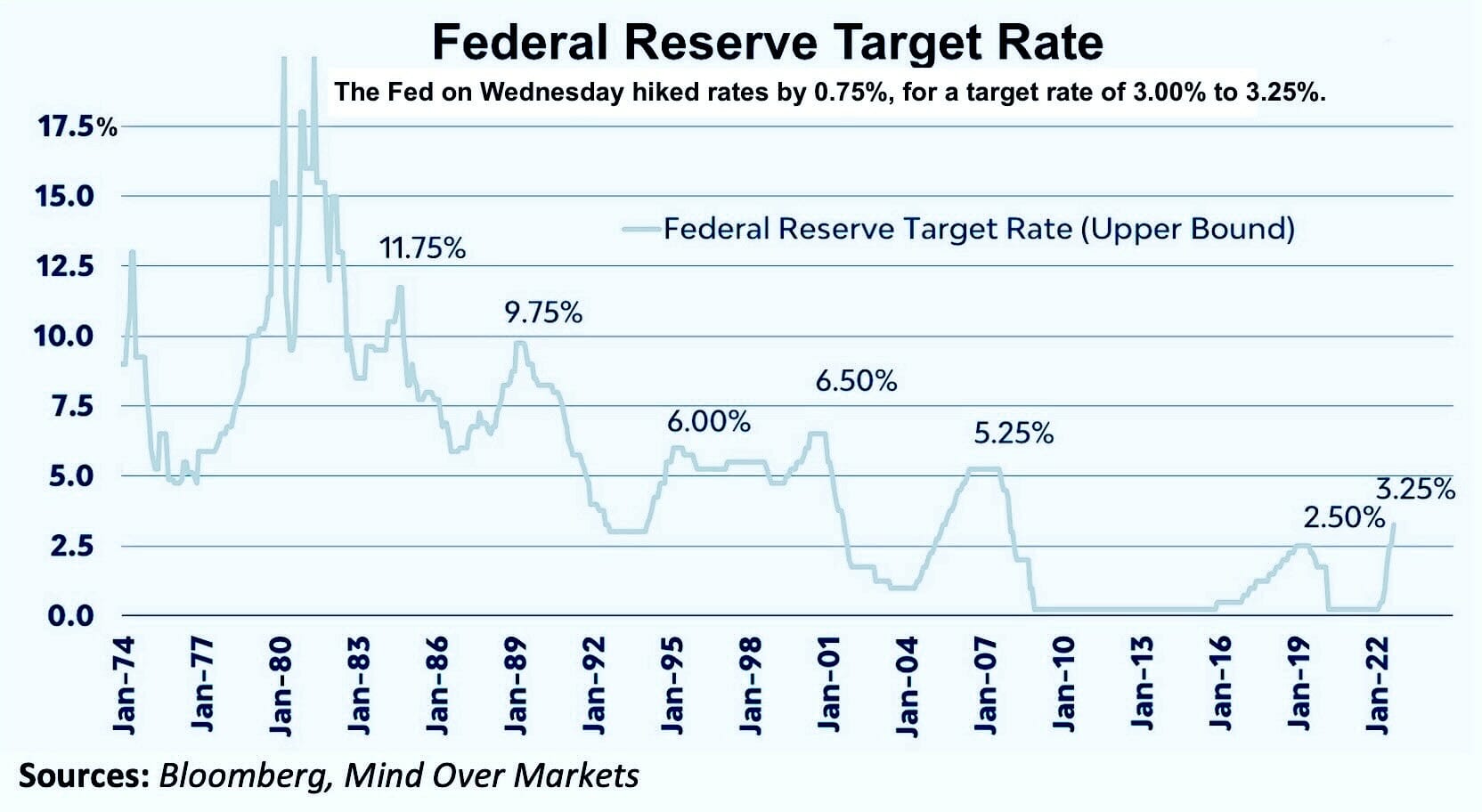 The FOMC downgraded its projections for U.S. gross domestic product (GDP) growth, currently predicting paltry GDP growth of 0.2% this year, sharply down from its June estimate of 1.7% for 2022. Next year’s projection is seen rebounding to a still measly 1.2%.

Also weighing on stocks were mounting fears over the Russia-Ukraine war. Responding to recent setbacks suffered by his military machine on the battlefield, Russian President Vladimir Putin announced Wednesday that he was mobilizing 300,000 reservists for the fight. Putin also threatened the use of nuclear weapons and assured the world that he was not bluffing.

But it was rate-hiking Powell, not saber-rattling Putin, who captivated investors Wednesday. At his press conference following the FOMC’s announcement, Powell said:

“My main message has not changed at all since Jackson Hole…No one knows if this process will lead to a recession or how significant this recession will be. It depends on how quickly price pressures come down…Failure to restore price stability would mean greater pain.”

To be sure, Powell punctuated his hawkish comments with a few positives. He noted that commodity prices probably have peaked, adding: “Monetary policy does work with variable lags. At some point, it will become appropriate to slow the pace of rate hikes to assess how the economy reacts.” But for the most part, Powell did not equivocate and he delivered a firmly hawkish message.

The 10-year minus 2-year U.S. Treasury yield curve remains inverted, as bond investors anticipate that the Fed’s aggressively tight monetary policy will push the U.S. economy into a recession. Powell implicitly said that we’re more likely now to face a recession than a soft landing.

The U.S. jobs market is robust, which in turn is adding upward pressure on wages. Powell can’t cool the economy without causing job losses, and predictably, on Wednesday the Fed’s rate hike got immediate political blowback from lawmakers on Capitol Hill who accused Powell of going too far.

Another dilemma is that, as Powell himself acknowledged, supply chain shocks caused by the pandemic and Russia-Ukraine war are major causes of inflation. The Fed’s monetary policy is powerless to address those variables, which means the Fed’s hawkishness could be causing gratuitous damage to an already vulnerable economy.

As I listened to the well-paid “uber-hawk” analysts pontificate Wednesday on CNBC about the need for Powell to emulate former Fed Chair Paul Volcker, this quote from President Harry Truman popped into my head: “It’s a recession when your neighbor loses his job; it’s a depression when you lose yours.”

The dominant story for the rest of the year will remain the Federal Reserve, which meets again in November and December. Yields are likely to continue to edge higher until a couple months previous to any pause in the boosting of rates, which could occur around the start of 2023. But for now, as the Fed demonstrated today, the hoped-for dovish “pivot” is dead.

PS: Want to reduce the risks I’ve just described, without sacrificing performance? Turn to my colleague Jim Fink, chief investment strategist of Velocity Trader. A renowned options trader, Jim has developed a proprietary investing method that consistently beats Wall Street in markets that are going up, down or sideways.