It wasn’t that long ago that semiconductor stocks were among the safest bets on Wall Street. No matter which laptops, smartphones, or personal computers consumers prefer, they all use chips made by the same coterie of semiconductor manufacturers.

The coronavirus pandemic was a boon for chipmakers. After bottoming out below $70 in March 2020, the SPDR S&P Semiconductor ETF (XSD) soared above $250 at the start of this year. 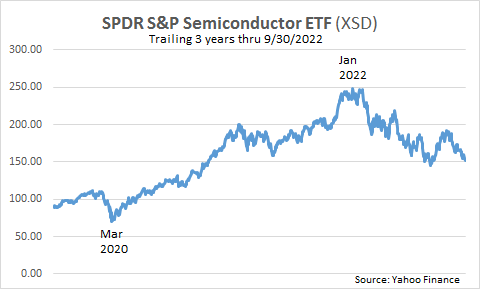 That works out to a 260%+ gain in less than two years. The stock market was on fire and information technology was the top-performing S&P 500 sector in 2021.

In large part that was due to the surge in demand for products that facilitate remote working. Video gaming equipment sales also jumped while people were stuck inside with not much else to do.

But those days are over and employers are demanding that their workers return to the office. And with schools reopening, there isn’t as much time for students to play video games.

That dynamic is clearly visible in the recent performance of the semiconductor sector. Over the first nine months of this year, XSD lost 37% and has given back all of its gains over the past two years.

That’s bad news if you bought chip stocks last year thinking they had nowhere to go but up. But it may be good news if you’re looking for some oversold tech stocks to buy now.

The safest way to play a semiconductor sector rally is to buy XSD. That way, you are more likely to profit if you are right about the sector but don’t know which companies are likely to lead it higher.

A less diversified strategy is to buy the top five holdings of the fund since they carry the most weight within the portfolio. Those companies are Rambus (NSDQ: RMBS), Diodes (NSDQ: DIOD), First Solar (NSDQ: FSLR), Silicon Labs (NSDQ: SLAB), and MACOM (NSDQ: MTSI).

You may not be familiar with most of those businesses. However, all of them produce semiconductor products and are considered pure plays on the sector.

The objective of the fund is to “provide investment results that… correspond generally to the total return performance of the S&P Semiconductor Select Industry Index.” As of last week, XSD had roughly $1 billion in total assets.

The fund holds 38 stocks with an average trailing one-year price/earnings ratio of 12.9 compared to a multiple of 18.2 for the S&P 500 Index. That big of a discount to the overall stock market is unusual for the tech sector.

Under normal circumstances, most tech stocks would be valued at a premium to the index. But these aren’t normal times and Wall Street is running scared.

That won’t last forever and the opportunity to buy chip stocks this cheap may not last much longer.

The intent is to dissuade China from annexing Taiwan, which is home to some of the world’s biggest semiconductor makers. It remains to be seen if that objective is realized.

However, it will reduce revenue for most semiconductor businesses in the near term. The day the ban was announced, SOXX fell 3% to close at a new low this year below $151. The following day it fell even further, trading below $148.

At the same time, the call option that expires in April 2023 at the $150 strike price was going for $18. A call option increases in value when the price of the underlying security goes up.

For that trade to be profitable, XSD must rise above $168 by the expiration date. That works out to a gain of 13% over the next six months.

Admittedly, that is an optimistic outlook However, I wouldn’t be surprised if chip stocks turn out to be one of the stock market’s top-performing sectors next year if inflation starts slowing down soon.

The turnaround for semiconductor stocks could begin even sooner than that. Especially if the United States and China can avoid a protracted trade war using semiconductor manufacturers as bargaining chips.

Editor’s Note: The next wave of technological innovation is poised to take off. When we’ve put inflation and the pandemic behind us, certain companies will explode on the upside. Our experts have come up with eight shocking next wave predictions for the future. Click here for details.