Higher Interest Rates Are a Boon For Retirees

A longtime reader sent me this message last week: “With the rapid, recent rate increases at the Federal Reserve Bank, lately I have seen guests on popular news media recommending considering bonds. Can you remind me about the options and timing for long-term investors?”

That’s a good question given how much interest rates have risen recently. At the start of this year, the yield on the 10-year Treasury note was below 2%. Last week it rose above 4% for the first time in more than ten years.

As yields rise, the prices of fixed-rate bonds go down. The iShares 7-10 Year Treasury Bond ETF (IEF) fell from above $114 at the start of this year to below $95 last week. That’s a 17% loss in a fund that owns what are generally regarded as the safest investments in the world! 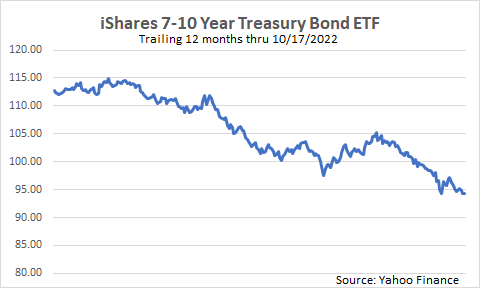 In the past, I did not spend much time discussing bonds since I knew it was only a matter of time until they started losing value. But now that the Fed has abandoned its Zero Interest Rate Policy (ZIRP), bond yields are quickly reverting to historical norms.

We aren’t quite there yet, but eventually the Fed will start easing off on rate hikes. When that happens, bond prices should stabilize. From that point forward, bond funds should be safe to own again.

That is especially good news for retirees, many of whom require regular withdrawals from their investment accounts to make ends meet. The days of having to count on erratic stock market appreciation for their retirement income are numbered.

Instead, they can move that money into a portfolio of diversified bond funds to provide steady income in retirement. Here are a few that I like for that purpose.

You can’t get much more diversified than the Osterweis Stategic Income Fund (OSTIX). Its holdings include 149 different bonds and 7 stocks. The fund’s objective is to “preserve capital and attain long-term capital returns through a combination of current income and moderate capital appreciation.”

It has done that well. Since its inception 20 years ago, OSTIX has delivered an average annual total return of 5.7% compared to 3.2% for the Bloomberg U.S. Aggregate Bond Index.

The fund pays dividends quarterly. Its most recent distribution of $0.12346 per share equates to a forward annual dividend yield of 4.9%. The fund holds $4.5 billion in total assets and has a gross expense ratio of 0.84%.

For exposure outside of the United States, consider the Fidelity New Markets Income Fund (FNMIX). According to its sponsor, the fund is “Normally investing at least 80% of assets in securities of issuers in emerging markets and other investments that are tied economically to emerging markets.”

As of September 30, roughly 32% of the debt held by this fund was issued in Latin America. Another 24% is from the Middle East while Africa accounts for 14% of the fund’s total assets.

The fund currently sports a distribution yield of 5.6%, which is considerably less than its 7.5% 30-day yield. That suggests that it is not sacrificing capital to enhance dividend payments. Dividends are paid monthly and the total expense ratio is 0.8%.

As of last week, 72% of this fund’s issuers were in the Financials sector. Energy companies accounts for 11% of the fund’s assets while Utilities comprise another 8%. All of the securities held by the fund are rate BBB or lower by both S&P and Moody’s.

The three funds above have an average distribution rate of 5.1%. That should be sufficient for most retirees, but I know of a way you can do a lot better if that won’t get the job done for you.

As chief investment strategist of Velocity Trader, Jim has developed a proprietary investing method that consistently beats Wall Street in markets that are going up, down or sideways.

In a new Investing Daily video, Jim Fink reveals how he hit 626 winners in 647 closed trades. What’s even more amazing is that Jim’s unshakable strategy worked as well during our last bull market… as it did during the pandemic-induced crash…and as it’s still doing today. Click here for details.