Bitcoin: The Unexpected Adult in the Room During Crisis

Few financial assets have been as stable as Bitcoin (BTC) recently. Over the past three months, the price of the cryptocurrency has hovered near $20,000 with little deviation.

During the same span, traditional asset classes have been considerably more volatile:

During the first half of this year, Bitcoin investors took a beating. After peaking above $47,000 in late March, the price of a Bitcoin fell below $20,000 by the end of June. 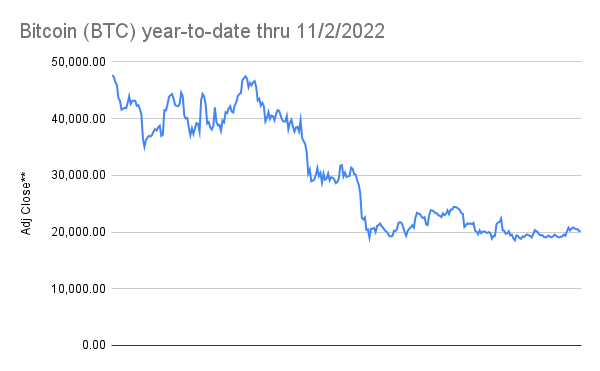 But since then, Bitcoin has been a model of consistency. While stocks and bonds have gyrated wildly in response to monthly inflation reports and subsequent Fed interest rate hikes, Bitcoin has barely reacted at all.

That is not because investors have lost interest in Bitcoin. In fact, the average daily trading volume for Bitcoin was slightly higher in October than in January. Nevertheless, over the past six weeks the price of Bitcoin has strayed less than 5% from the $20,000 mark.

I find that last data point fascinating. If speculators are still trading Bitcoin, then its price should be more volatile.

That leads me to believe that Bitcoin is now being used for another purpose. Namely, as a store of value until the Federal Reserve is done raising interest rates and the bond market stabilizes.

If the primary purpose of Bitcoin has morphed from speculation to capital preservation, that begs the question: Who is now using the cryptocurrency for that reason, and why?

It certainly isn’t the individual investors that bought Bitcoin last year hoping to double their money overnight. Most of them have either been washed out or are waiting for its price to double so they can get out without losing their shirts.

It also isn’t large corporations such as MicroStrategy (NSDQ: MSTR) that loaded up on Bitcoin in the past. That strategy has proved disastrous. Since peaking above $700 a year ago, MSTR is now trading below $300.

I also don’t believe that private equity is behind Bitcoin’s newfound status as a stable asset. Most of that money is going into currency plays on the American dollar, which has soared in value this year.

My guess is it is institutional bond investors that are now using Bitcoin for capital preservation. As interest rates go up, the value of fixed-rate bonds go down. Right now, a lot of those investors have big losses in their bond portfolios this year.

That creates a dilemma. Should they reinvest the cash flows they are getting from their current holdings into newly issued bonds at higher yields, understanding that those bonds may soon lose value as rates rise?

Certainly, last week’s 75 basis point increase in the fed funds overnight rate did not help, especially after Fed Chair Jerome Powell indicated that he may be far from finished raising rates to take down inflation.

It isn’t clear how much longer or higher the Fed will keep raising interest rates. For that reason, bondholders may prefer to reinvest the interest and redemption payments they are receiving into a stable asset.

However, they’d rather not compete with private equity investors for dollar denominated securities right now. When that play is over, those investments could crash hard as everyone runs for the exits.

Consider the Invesco DB US Dollar Index Bullish Fund (UUP). Through last week, UUP was up 17% this year. 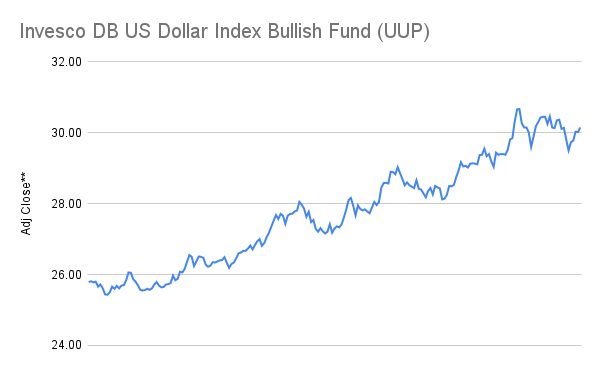 According to UUP’s sponsor, “This ETF offers exposure to a basket of currencies relative to the U.S. dollar, decreasing in value when the trade-weighted basket strengthens and increasing when the dollar appreciates.”

It is only a matter of time until the dollar begins to weaken. And when it does, this fund could just as quickly give back this year’s fast gains.

If you want to bet on a big drop in the dollar next year, one way to do that is to buy a put option on UUP. A put option increases in value when the price of the underlying security goes down.

For example, last week while UUP was trading a little over $30, the put option that expires in January 2024 at that strike price could be bought for $1.60. For that trade to be profitable, UUP must decline by more than 5% over the next fourteen months.

P.S. My longtime colleague, John Persinos, editorial director of Investing Daily, has just launched a brand-new service detailing how you can financially benefit from the legalization of cannabis. Called Marijuana Profit Alert, it’s your guide to making money in these challenging times. Click here to learn more.