When I was a child, the Christmas gift buying season did not get going in earnest until after Thanksgiving. Most families did not want to dilute the meaning of one holiday by overlapping it with another.

That is no longer the case. This year, the Amazon Prime days of July 12-13 are when some folks started shopping for gifts.

Others waited until Labor Day to get going. A few laggards pushed off until after Halloween.

I’m still not used to shopping for Christmas gifts while it is shorts and tee shirt weather, but I accept it. And if nothing else, it makes my job as a stock market analyst a bit easier.

I no longer have to wait until December to start figuring out which product manufacturers and merchants might be this year’s big winners. Now, some of that information can be gleaned from the third quarter results and fourth quarter guidance put out by those companies.

Consider the hints provided by the major retailers this month. Walmart (NYSE: WMT) raised its guidance for consolidated net sales growth in Q4 to 3%. That day, its share price jumped more than 6%.

Target (NYSE: TGT), on the other hand, lowered its sales guidance for Q4 due to “softening sales and profit trends that emerged late in the third quarter.” By the end of that day, TGT was down 15%.

Of course, Walmart and Target sell a lot more than just holiday gifts. However, they take that into account when predicting their fourth quarter performance.

Perhaps the most surprising announcement out of the retail sector this month came from Bath & Body Works (NYSE: BBWI). During the third quarter, the company delivered earnings per share (EPS) that was exactly double the top end of its guidance range.

That day, BBWI jumped 25%. That’s the good news. The bad news is that even after that big increase, BBWI is still down 50% from a year ago.

Last week, I noted that I own BBWI in my personal account. I also detailed a covered call option play that I can use to earn some immediate income.

This week, I am going to show you a way to play an unexpected surge in holiday shopping. In this case, I am going to buy a call option instead of selling one.

And since I don’t know which merchant to bet on, I’m going to bet on a lot of them. To do that, I will use the SPDR S&P Retail ETF (NYSE: XRT) as the underlying security.

A year ago, XRT was trading above $100. At the start of this month, it slipped below $60 before leveling off. If it keeps rising, there is short-term technical resistance near $75. 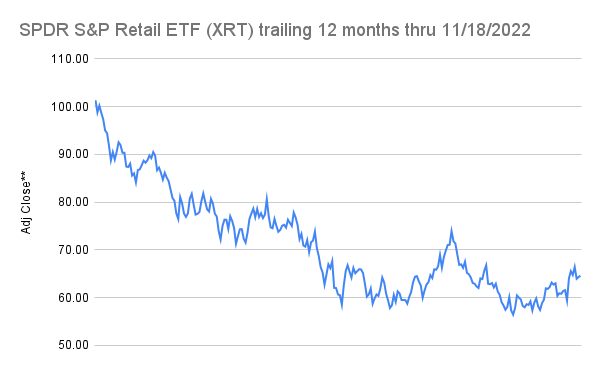 Here’s my options play on XRT. I will go out to the January 20 expiration date. That way, I am only capturing the current quarter’s results without paying additional time premium for next year’s results.

I’m not trying to make a killing on this trade. If I were, I’d buy an out-of-the-money call option that costs less but is also riskier.

I hope to double my money on this trade. For that to happen, XRT would have to reach $72 by the time this option expires.

That is roughly 10% above where it is currently trading. That’s a lot of ground to cover in just seven weeks. But given how volatile retail stocks are at the moment, anything can happen.

I also believe that a “Santa Claus” rally could drive stocks higher in late December. Portfolio managers will be looking for bargains heading into 2023, and the retail sector is one area where they will be shopping.

I will admit that my optimistic outlook for retail stocks puts me in the minority on Wall Street. However, I have seldom been let down when betting on consumers to spend more than expected. Especially when they start shopping for Christmas gifts in July.

Editor’s Note: Did you know that options are powerful and flexible tools? They can be used by stock investors to reduce risk and enhance returns. However, they’ve gotten a bad rap because they’ve been used improperly by “get rich quick” traders rather than long-term investors.

As with any tool, options can be abused. But the problem is not with the options tool itself, but in its application.