There’s a breed of authoritarian-minded American who admires tyrants such as Russian President Vladimir Putin, or Chinese President Xi Jinping…or, back in the 1930s, German Chancellor Adolf Hitler. But as you look for stable places to invest your hard-earned money, remember this lesson from history: all tyrannies fall.

For years, we’ve heard the “America-is-in-decline” school of thought warn that China is on the cusp of supplanting the United States as the world’s political and economic leader.

Especially implausible are theories about Russia and China banding together to form a gold-backed cryptocurrency to dethrone the U.S. dollar as the world’s dominant currency. Such conspiracies belong in the pages of L. Ron Hubbard.

I quote Warren Buffett, who currently sports a net worth of $109.8 billion: “Never bet against America.”

All of which brings me to the current civil unrest and political chaos in China, which is weighing on financial markets. Below, I unearth the lessons for investors.

Read This Story: Why a “Strong” U.S. Dollar Is Both a Blessing and a Curse

The world’s second largest economy is a surveillance state, with a repressive grip on its people that makes 1984 seem tame. And as I write this, China is roiled by violent protests against its zero-COVID quarantine policies. The turmoil in China sent stocks tumbling Monday.

The worsening protests in China are exerting a negative impact on crude oil prices, which have fallen below $80 per barrel. Crude hit an 11-month low on Monday (see chart). 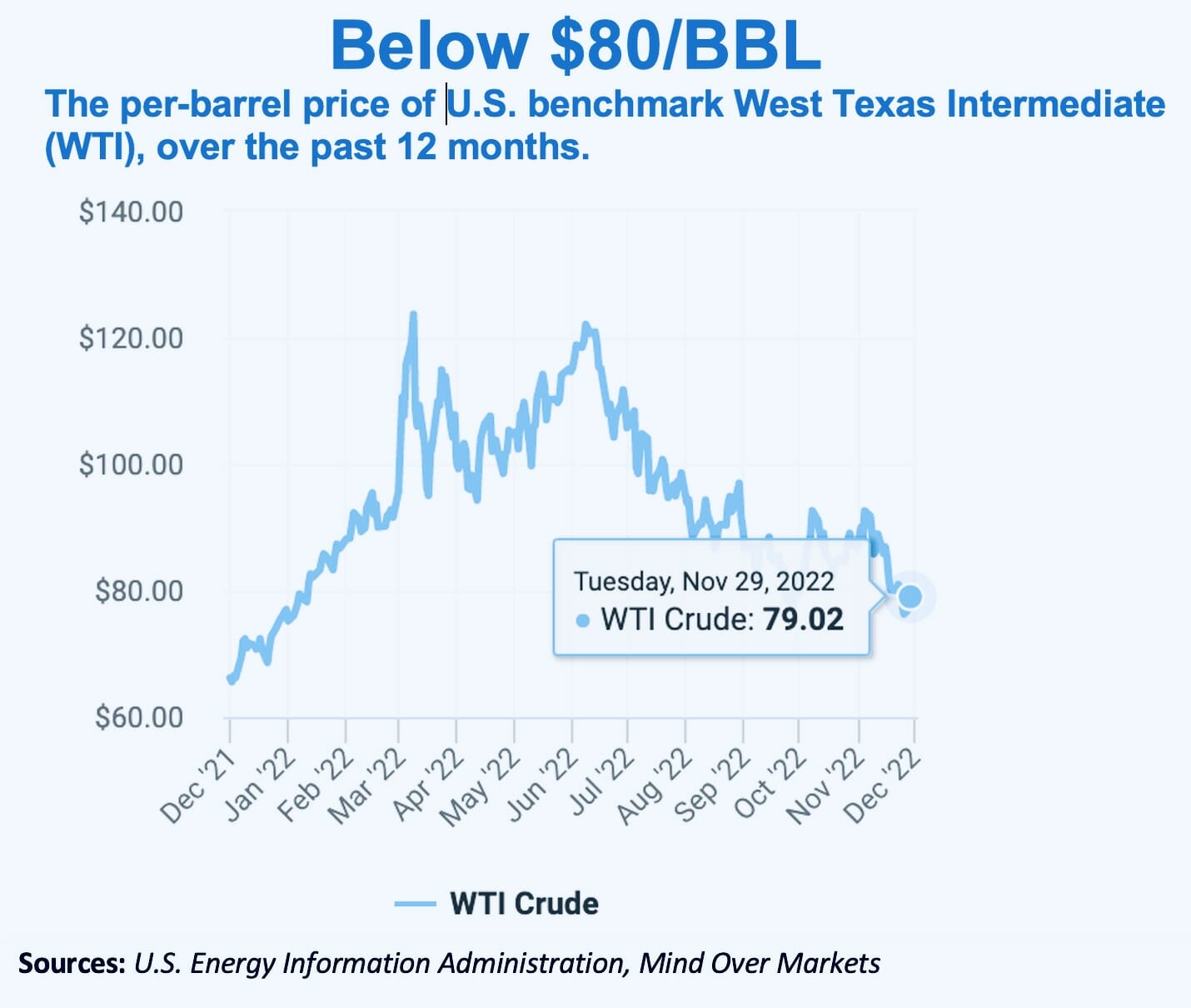 Falling crude prices are disinflationary and that’s good news. U.S. drivers may get an early Christmas present this year: gasoline prices below $3.00 per gallon. As of this writing, the average price of gas has dropped to $3.52 and it seems set on a continued downward trajectory.

China is the world’s largest importer of crude oil; the country’s eruption of domestic chaos over the past few days has instilled bearishness among oil traders.

The rare sight of protestors causing mayhem on city streets in repressive China is sending shockwaves through global financial markets. A deadly apartment fire in a Chinese city triggered by pandemic restrictions has only added fuel to the public rage.

In a darkly comic side note, Chinese bot accounts flooded Twitter with pornographic content over the past weekend in a heavy-handed attempt to bury news about the massive protests against Jinping.

Beijing’s COVID restrictions have led to factory shutdowns and dampened China’s economy. Despite public pressure to ease up, Beijing has remained steadfast, even though the rest of the world has found ways to mitigate COVID but still function with a high degree of normalcy.

These nuanced anti-COVID policies in the West included quarantine restrictions, followed by mandates for vaccinations and masks, and then as immunity rose, the lifting of restrictions. The approach has worked.

Instead, China chose an iron fist…an approach that has backfired. The following chart, released Tuesday by the research firm Statista, tells the grim story: 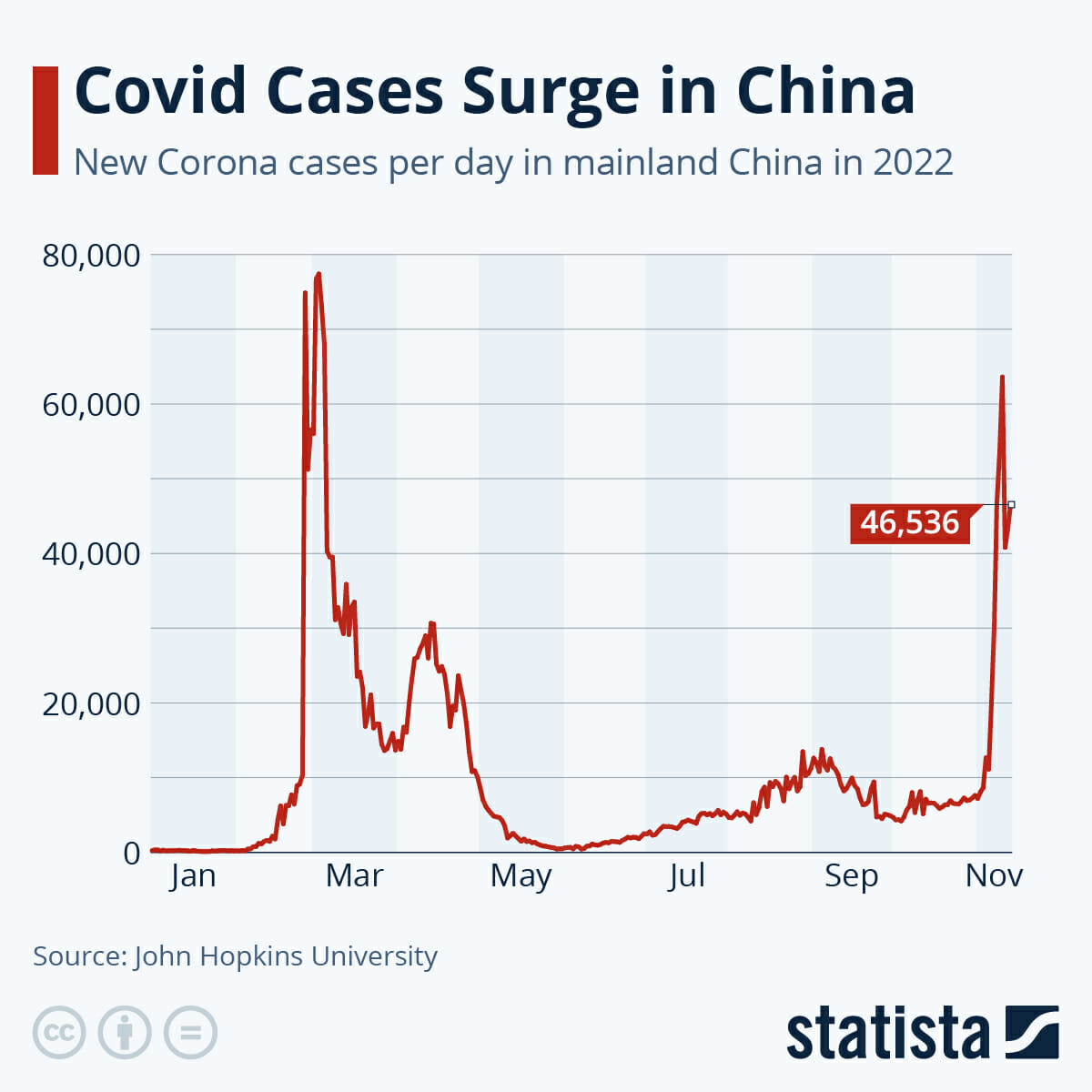 The world heavily depends on China’s manufacturing capacity; COVID lockdowns have created shortages of a wide variety of goods. These supply woes have fueled inflation, which in turn affects central bank policy in the U.S. and abroad.

Taiwan-based Foxconn (OTC: FXCOF) is getting hammered by China’s COVID restrictions and concomitant social unrest. Foxconn’s production plant in Zhengzhou, China, is the world’s largest assembler of Apple (NSDQ: AAPL) iPhones. COVID protests at the plant are causing the loss of an estimated 6 million iPhone Pros from the global market, which is driving down the price of Apple shares.

On Tuesday morning, the Chinese authorities were busily engaged in the predictable: cracking down on the civil disobedience. The country has stepped up police security, arrested protestors, and further strangled Internet speech.

Jinping’s COVID policies have failed spectacularly and the pandemic is getting worse throughout the country, whereas other nations are approximately returning to pre-pandemic lives. About 60% of China’s manufacturing capacity occurs in locked-down cities. However, autocrats rarely admit mistakes and change course.

Authoritarian regimes are often portrayed as more efficient and decisive than messy democracies. As evidenced by Putin’s self-destructive misadventure in Ukraine and China’s war against its own people, the opposite is true.

According to the latest data from the International Monetary Fund, the U.S. is the best performing economy in the G7, with average annual economic growth of +2.0% over the period from 2020 to 2023.

As Winston Churchill, the savior of Western civilization, famously said: “Democracy is the worst form of government, except for all the others.”

As you seek new growth opportunities for 2023, stick to stable economies, transparency, and fundamentals. Don’t fall for baseless conspiracy theories, and don’t fall in love with dictators. And when you hear terms such as “crypto-golden yuan”…hide your wallet.

Editor’s Note: Are you looking for a steady source of income that defies the risks I’ve just described? Consider the advice of my colleague Jim Fink.