It isn’t often that a global car company chooses not to trade on an American stock exchange. But that is what India-based Tata Motors (NYSE: TTM) has decided to do effective January 23.

If you are not familiar with Tata, that’s because it does not market any of its automobiles under that name in the United States. However, you may be acquainted with its Jaguar and Land Rover brands which it sells all over the world.

Also, Tata is not nearly as valuable as the “big three” U.S. automakers. Tata has a market cap of around $19 billion, which makes it roughly one-third the size of Ford Motor Company (NYSE: F) and General Motors (NYSE: GM).

In 2004, Tata issued an ADS (American Depositary Share) that trades on the New York Stock Exchange. At that time, the company wanted to expand its investor base outside of Asia.

That effort was largely successful. Over the next eleven years, TTM gained more than 500%. But after peaking above $50 in January 2015, the stock plummeted to below $5 in March 2020 in the wake of the coronavirus pandemic.

Coincidentally, that is about the same time that Tata decided to prioritize electric vehicle (EV) production. That turned out to be a good move. Eighteen months later, TTM was above $33. 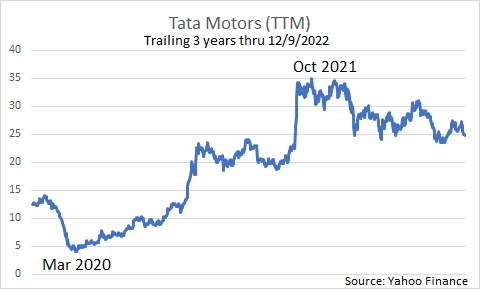 Since then, it has gradually backtracked to the mid-$20s. Rising interest rates are bad for new car sales, most of which are purchased using debt.

Nevertheless, Tata’s global unit sales increased 33% during the second quarter of this year (ended September 30) compared to last year. On a sequential basis, unit sales grew 6% versus the previous quarter.

Now that Tata has a growth plan that appears to be working, I am surprised it is turning its back on the world’s largest stock market. Presumably, this move isn’t being made for strictly financial reasons.

According to the company, the rationale for delisting its ADS from the New York Stock Exchange is “the consistent drop in the number of ADSs outstanding as a percentage of its ordinary shares.” At the same time, Tata has “witnessed a considerable increase in liquidity and foreign shareholder participation in the equity stock markets in India.”

I don’t doubt that both of those statements are true. However, I also don’t believe that the reduced administrative costs and simplified financial reporting requirements cited as benefits of the delisting are sufficient to justify such a move.

My guess is Tata realizes that it will not be able to penetrate the U.S. car market anytime soon. Recently, Ford and General Motors made huge commitments to EV production so they can better compete with Tesla (NSDQ: TSLA).

That being case, Tata is focusing on its home market of India. It’s a huge growth market, and Tata estimates that it currently accounts for more than 80% of all EV sales in India.

With a population of 1.4 billion people, the potential for EV sales in India is enormous. Especially when you consider that less than 10% of households in India own a car of any sort (compared to 95% in the United States).

In short, Tata does not want to get caught in a squeeze between the United States and China. It has a huge market in its own backyard and can’t afford to lose it to foreign competitors.

In that regard, the company’s decision to delist from the New York Stock Exchange makes sense. Tata has decided to go all-in on India and is pushing all of its chips into the middle of the table.

The question is, will investors in India respond favorably to Tata’s decision to eschew foreign investment? If they do not, then the stock may take a dive once the $19 billion in ADS capital has been either cashed out or converted to shares on the Bombay Stock Exchange.

I’ll be watching to see if Tata survives the delisting without destabilizing its stock market value in India. If so, then that might trigger a wave of delistings by other overseas companies that don’t do much business in the United States.

In that respect, there could be a lot more at stake than the fortunes of just one company. The balance of power in the global equity markets may be shifting to the east, with the world’s two most populous countries at its core.

Editor’s Note: Average income investors face a looming cash catastrophe. Retirees, the very people who helped build the country we know and love today, are the ones most at risk.

But you could be securing an effective yield as high as 26% on a safe “cash alternative” that out earns savings accounts, bonds, and ordinary stocks alike.

Our colleague Robert Rapier, chief investment strategist of Utility Forecaster, has figured out a totally legal and simple strategy that not only protects your wealth, but could keep your nest egg growing no matter what the market or the U.S. government throws at us next.

Want to learn more about the coming cash crisis, and how to overcome it? Click here for details.