Taking Tesla for a Spin

I was confronted by a dilemma last week. A stock screener that I use for one of the trading services I manage identified Tesla (NSDQ: TSLA) as being oversold and ripe for a rebound.

Normally, I’d issue a buy alert for TSLA accompanied by a call option recommendation. But in this case, I just couldn’t convince myself to do it.

It’s not that I don’t have faith in my PF Pro system. Despite the stock market’s steep correction this year, we have booked several 100% gains on our options trades.

It’s not that I don’t believe the growth projections for the electric vehicle (EV) market. If anything, I think EV sales will grow faster than expected, especially during the second half of this decade.

The problem is that I have lost faith in Tesla founder and CEO Elon Musk. I always thought he was eccentric, but now I wonder if he isn’t just plain nuts.

To be sure, visionaries such as Musk are different from the rest of us. They see possibilities that escape the less imaginative and have the courage to act on them.

On that score, I am fan of Musk. But now that Tesla has legitimate competition from most of the world’s major automakers, the company needs mature leadership.

Unfortunately, that is the one thing that Musk cannot provide. Two years ago, I referred to him as “the King Midas of Wall Street.” But now, he comes across more as Peter Pan.

A Matter of Trust

Back then, I never imagined that Tesla would meet all of my PF Pro requirements for being undervalued. I said Musk “is the man that can do no wrong in a stock market that will only go up.”

A lot of things have changed since then. The stock market has taken a beating this year, especially growth stocks like Tesla. Year-to-date, TSLA is down 60% and is struggling to find support. 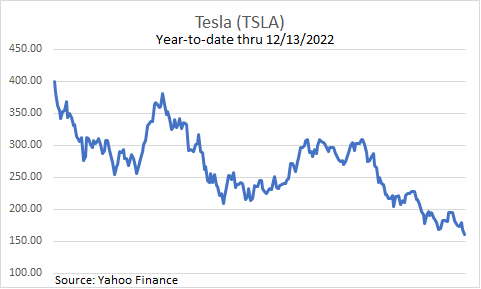 Believe it or not, Tesla now has a PEG (price/earnings-to-growth) ratio of 1.0. That is the threshold that legendary mutual fund manager Peter Lynch used to identify undervalued growth stocks.

From a technical perspective, Tesla’s RSI (relative strength index) and Fast Stochastic agree that the stock is severely oversold. And it has strong support around $150, less than 5% below where it was trading late last week.

If I ever were going to open a position in Tesla, now would be the time. The stock is cheap, and Tesla is the industry leader in a huge growth market.

So why can’t I pull the trigger on this trade?

In a word, it all boils down to trust. And right now, I do not feel that I can trust Elon Musk to do the right thing for his shareholders.

At the moment, Musk seems to be spending most of his time mismanaging Twitter, which he recently took private. But his attention span is notoriously short, so it won’t be long until he once again turns his sights on Tesla.

Running Out of Options

There is another reason why I can’t trade Tesla in my PF Pro portfolio. The premiums for its call options are too expensive.

Last week while TSLA was trading near $157, the call option at the $160 strike price that expires in January 2024 was going for $42. For that trade to be profitable, TSLA must appreciate at least 28% over the next thirteen months.

As a rule, I only buy long-term call options if I believe there is a reasonable chance that I can double my investment. For that to happen, TSLA must appreciate 56% by the time this option expires.

That might happen, but not if the Fed is successful in inducing a recession next year. Even if it is not, the higher interest rates that it can make happen will drive up the cost of acquiring a new car.

In this case, buying the stock makes more sense to me than buying the option. There is a good chance that my option may expire worthless, but I can hang onto the stock until it recovers no matter how long that takes.

Editor’s Note: How can you hedge your portfolio against risk, and still enhance gains? Consider the advice of our colleague Jim Fink.

Jim Fink is the chief investment strategist of Options For Income, Velocity Trader, and Jim Fink’s Inner Circle. Jim has devised a proprietary trading method that has the power to hand you $1,463 every Thursday. Just like an extra paycheck!