Will China Go The Way of Japan?

For years, pundits, politicians, and policymakers have been darkly warning that China would soon leapfrog the U.S. to become number one on the world stage. I’ve always looked askance at the “America-in-decline” school of thought. This week, new data made the Sinophiles look even more fatuous.

Economic and demographic reports released in recent days by Beijing point to serious trouble ahead for China, and by extension the global economy.

China’s latest woes have been weighing on financial markets. The January rally has stalled, with equities falling in the U.S. and overseas, and U.S. Treasury yields rising. Recession fears are back. Asia-Pacific shares have been among the hardest hit, as regional leader China stumbles.

I’ll get to China’s latest challenges in a minute. But first, let’s consider the lessons of China’s Asian rival, Japan.

Land of the Setting Sun…

I started my career as a financial analyst during the go-go Reagan era, when Wall Street lionized the Japanese. It seemed that every business book had a picture of a sword-wielding samurai on the cover. One of the most overused words among my colleagues was “Zen.”

During the Big Eighties, Japan was the world’s second-largest economy. The conventional wisdom was that America was decadent and the wise Japanese would one day be our overlords.

The Japanese economy eventually outgrew this prolonged slump, but at a much slower rate of growth than other industrialized nations. The island nation is now the third-largest economy, getting eclipsed by China in 2010.

My memories about Japan worship during the 1980s came back to me this week, as I perused the latest economic and demographic data from China.

The Chinese economy grew on a year-over-year basis by only 3% in 2022, the lowest annual reading since China started reporting GDP in the 1970s (excluding the pandemic slump of 2020). The following chart tells the story: 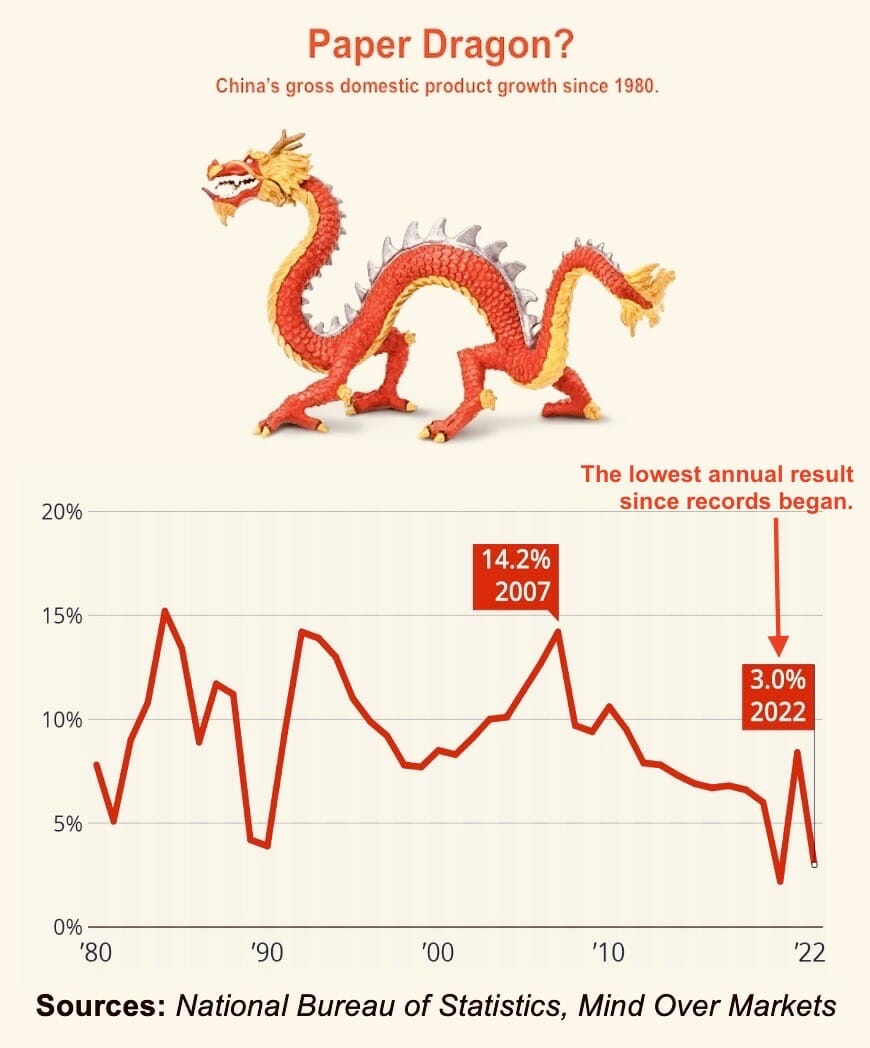 Back in the COVID-afflicted year of 2020, China actually defied expectations and reported positive GDP growth, the only major world economy to pull off that feat.

But that was then; this is now. Hurting China’s long-term prospects is a declining population. On January 17, the country announced its first population decline in 60 years. China’s NBS revealed that the country had 850,000 fewer people at the end of 2022 than in 2021, bringing its total population to 1.4 billion.

The ramifications for the global economy are vast. China remains the world’s most populous country, but as the population ages, its economic growth will inevitably slow. With fewer younger workers to support seniors, the economy will lose dynamism and the standard of living will decline. It’s already starting to happen and some analysts say the trend is irreversible.

Many factors are driving China’s population decline. The pandemic certainly plays a role. But the country’s now-rescinded one-child policy is a culprit, as well as the decision of stressed-out youth to forgo the psychological and financial burdens of having kids.

China’s massive debt and real estate burdens won’t get solved anytime soon. The government’s bungling of its COVID policy only worsens the pressures on China’s society and autocratic leadership.

China remains the global growth engine, which is why the latest statistics from the world’s second-largest economy have spooked financial markets. Global equity markets slumped Wednesday, with worries about China souring sentiment.

WATCH THIS VIDEO: Does The January Rally Have Legs?

To be sure, the consensus of analysts calls for China to rebound to annual GDP growth of about 5% in 2023, but many wild cards could scuttle that forecast. COVID continues to ravage the country and Beijing seems powerless to stop it. The leadership’s on again, off again “zero tolerance” stance has been a disaster.

Meanwhile, here in the U.S., the federal government hit its debt limit on Thursday. The ultraconservatives in charge of the U.S. House refuse to raise the ceiling for borrowing, unless major cuts are made to popular social programs such as Social Security, Medicare, and Medicaid. The Democrats vow to oppose such cuts. As of this writing, the brinkmanship in Congress continues, making Wall Street jittery.

Looking for growth opportunities that are immune to the problems in China or the shenanigans in Washington? The next wave of technological innovation will reward investors who act now.

After years of painstaking research, our experts have created a report that pinpoints eight “megatrends” that are poised to generate outsized investment profits. Click here for your free copy.