The Debt Ceiling Crisis: What it Means for Investors

I usually counsel you to tune out the noise machine in Washington, DC. However, there are times when the wrangling in our nation’s capital has adverse consequences for the economy, financial markets, and your portfolio. The current fight in Congress over the debt ceiling is one of those times.

The razor-thin and fractious GOP majority in the U.S. House is trying to use the debt limit to force spending cuts in popular social programs such as Social Security that they can’t otherwise enact into law.

President Biden’s response to Republican demands reminds me of Michael Corleone’s famous line in the movie The Godfather: Part II: “My offer is this: nothing.”

The political impasse is rattling Wall Street and weighing on markets. Without getting too wonky, below is a concise explanation of the debt limit crisis and what it means for your hard-earned wealth.

Burning down the house…

The debt limit was established in 1917 to expedite financing for World War I. Before that, Congress had to authorize each bond issue. The limit allows the U.S. Treasury to issue bonds without specific Congressional approval.

Is the debt ceiling an arcane and outmoded law that should be repealed? Yup. But that’s another topic, for another day.

The debt limit is not a limit on spending; it’s a limit on the borrowing authority of the federal government. It represents the total amount of money the Treasury is allowed to borrow to meet the obligations of the federal budget under existing law.

Contrary to some of the falsehoods you may be hearing, the debt limit doesn’t give the president free use of a “credit card” to spend whatever he wants. The limit simply authorizes the government to honor obligations as authorized by Congress.

Because these obligations currently surpass the projected amount of taxes and other revenue, they must be met in part through borrowing. That’s been standard procedure for more than a century, and financial markets are more than willing to lend Uncle Sam the money.

We officially hit the debt limit on Thursday and the House leadership is attempting to use the limit as leverage to cut programs that already were approved by Congress.

If investors lose faith that the U.S. Treasury will meet its obligations, it could trigger a global financial crisis. U.S. debt is a major pillar of the global financial system, in large part because of its stability, so a default would clobber economies and markets around the world.

Since 1917, the debt limit has been routinely raised without a fuss, except twice: in 2011 and 2013, when the GOP and the Obama administration came to loggerheads. The worst and longest impasse was in 2011, when Standard & Poor’s removed the U.S. from its list of risk-free borrowers. The stock market subsequently plunged by 14% over four weeks.

According to Moody’s, a U.S. government default this time would cause the stock market to plunge by one-third and wipe out $15 trillion in household wealth. A default also would push interest rates higher, raising borrowing costs for companies and individuals.

When brinkmanship occurs in Congress, a face-saving resolution is usually reached. However, in recent years, we’ve witnessed the emergence of political nihilism. The art of legislating has been replaced by what I refer to as “anger-tainment.” Some politicians don’t want solutions; they want to burn down the house. They seem determined to wreck the economy, for the sake of scoring partisan points.

Opinions about the debt ceiling crisis? Send me an email: mailbag@investingdaily.com. Let’s get a dialogue going.

Now let’s turn our attention from politics to the bottom line. S&P 500 earnings for the fourth quarter of 2022 continue to pour in. Earnings growth has decelerated and certain bellwethers (e.g., the big banks) have posted mixed results. But the pessimism is probably overdone. Just as we might dodge an economic recession, we might be able to dodge an earnings recession as well.

For Q4 2022, the projected earnings decline for the S&P 500 is -3.9%, according to research firm FactSet. If that number turns out to be the actual decline for Q4, it will represent the first time the index has reported a year-over-year decline in earnings since Q3 2020 (-5.7%).

Keep in mind, though, that when Q4 earnings season is finally over, we’re likely to see a positive earnings growth rate. Over the past 10 years, actual earnings reported by S&P 500 companies have exceeded estimated earnings by 6.4% on average. 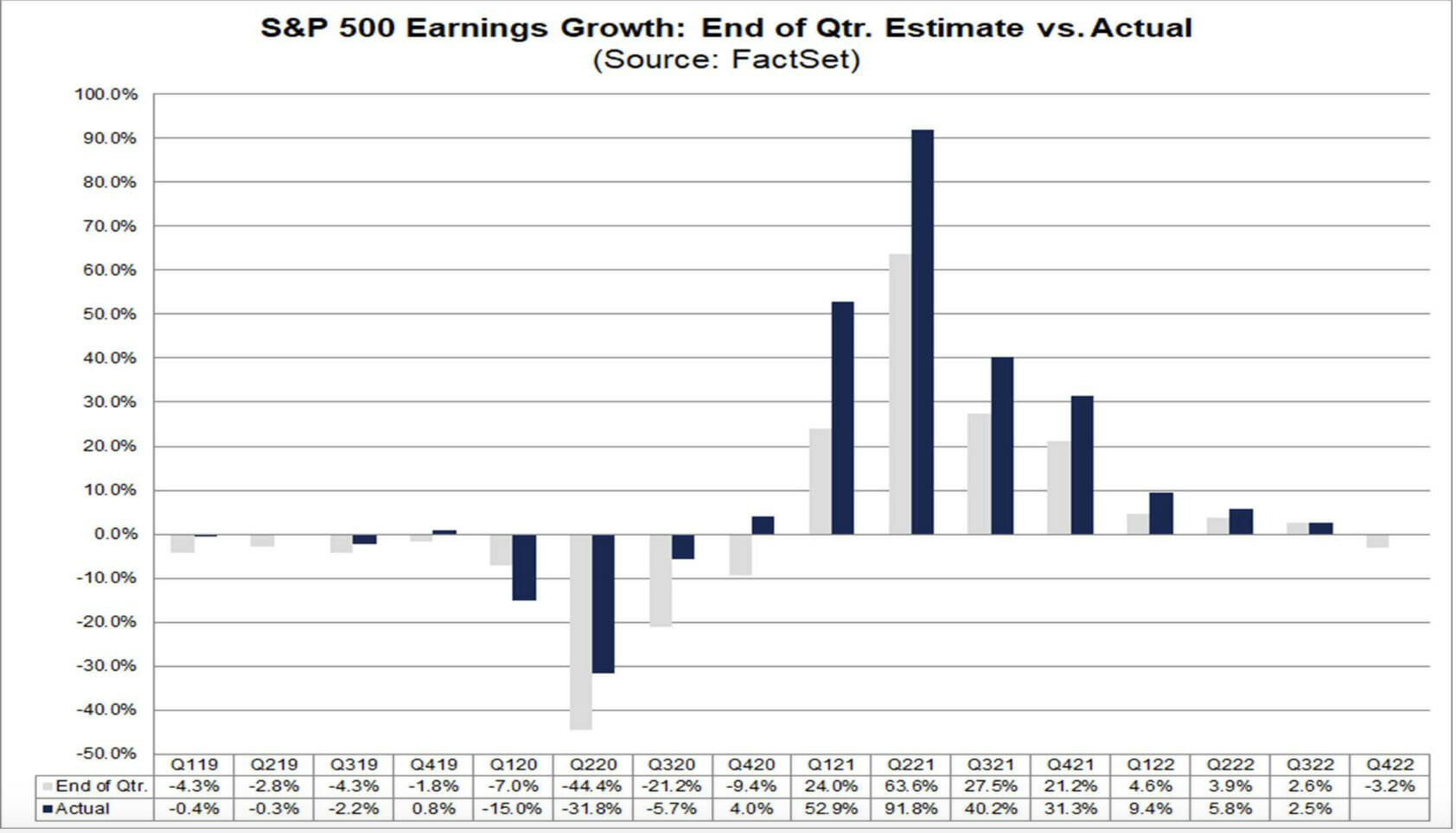 As you can see from the chart, the only times that actual results fell short of estimates were in Q1 2020 and the last quarter (Q3 2022).

WATCH THIS VIDEO: Does The January Rally Have Legs?

I’m bullish over the long haul. Inflation is cooling, the Federal Reserve is likely to ease its tightening cycle in the latter part of the year, and corporate earnings are resilient (albeit shaky).

After a choppy session, the main U.S. stock market indices closed higher on Friday, as follows:

Investors already are looking beyond current headaches. Now’s your chance to increase exposure to beaten down but inherently strong stocks (e.g., tech innovators) on your wish list.