Europe’s Economy Shines Through The Fog of War

Snap quiz: What’s the third-largest economy in the world?

If you answered Japan, you’re wrong. The joint economy of the European Union (EU) is the third largest in the world in nominal terms, after the U.S. and China.

Okay, it was a trick question. But you get the idea. Problem is, the average American doesn’t know much about Europe. That’s because the nightly news in this country gives vastly more coverage to Taylor Swift than, say, French President Emmanuel Macron.

However, if you’re looking for a promising investment destination, now’s a good time to glance across the pond. A surprisingly strong growth story is emerging in Europe that defies the pessimists who worried that the Russia-Ukraine war would cast a lasting pall over our Western allies.

You should always maintain a geographically diversified portfolio. This year, you can find new growth in the Old World. The latest economic numbers from Europe are robust. 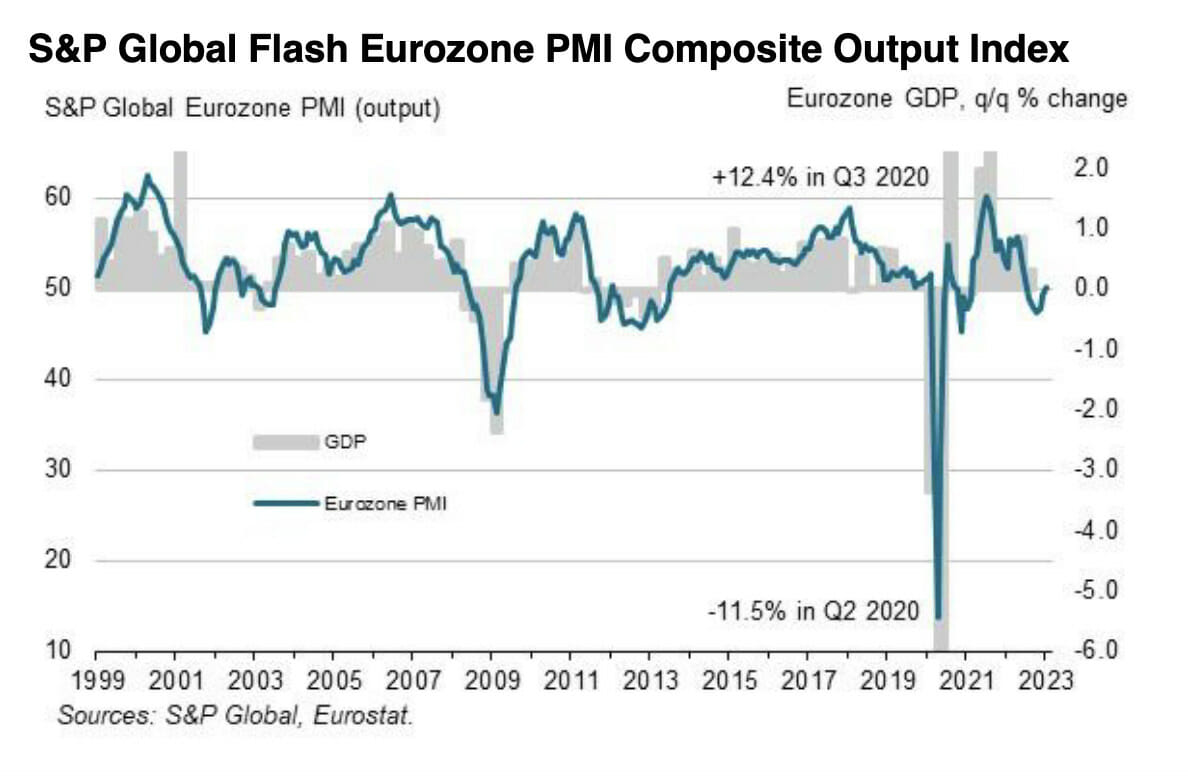 January was the first time the index has climbed above 50 since June and the reading beat the median analyst forecast of 49.8. Any reading above 50 represents expansion. Hopes are increasing that the 20-member currency bloc will avoid recession this year.

Reports from major eurozone countries such as France and Germany have shown inflation cooling at a faster rate than expected. The energy crunch induced by the Russia-Ukraine war also is proving less severe than feared, due to the success of governments to find alternate sources of oil and natural gas.

Efforts to import liquid natural gas from the U.S., Saudi Arabia, and other exporters have created ample national reserves. Russian President Vladimir Putin has been hoisted with his own petard, by permanently losing European customers for Russian-produced energy.

WATCH THIS VIDEO: The Narrative Shifts from Inflation to Growth

After initially balking at the request, the German government announced Wednesday that it would send heavy Leopard 2 tanks to Ukraine, to help repel an expected Russian military offense in the spring.

Meanwhile, political risk is rising in the U.S. Unless Congress raises the debt ceiling, the government will go into default with dire consequences for financial markets. The world would probably move away from the greenback as a reserve currency and U.S. Treasury bonds as a safe haven. Political uncertainty in the U.S. further enhances the appeal of foreign investing.

There’s one industry in particular that’s set to thrive in Europe: marijuana. With a population of more than double that of the U.S. and Canada combined, Europe is set to dominate the wide world of weed.

“Across Europe, with a population of 748 million and an annual healthcare spend exceeding €2.1 trillion (EUR), the expectation is that the Continent will become the largest world market for medical cannabis.”

Every portfolio should have exposure to the marijuana industry. That’s why I’ve just launched a new service detailing how you can financially benefit from the global mainstreaming of cannabis and psychedelics.

Called Marijuana Profit Alert, my publication is your guide to reaping profits from the psychotropic revolution. Click here to learn more.