Investors are a funny lot. Over the last decade they’ve pumped hundreds of billions of dollars into the shale oil sector. It’s a bit of a mystery when everyone is expecting a return on all this investment, because the old saying is true: if you give a Texan a dollar he’s going to drill a hole.

Meanwhile, computer disk drive manufacturing has long been a cozy oligopoly, and one that rains cash on shareholders instead of sucking it out of their pockets. And for a long time that didn’t matter.

Shale was a technological revolution, you see, while hard disk drives, well, they’re not at all revolutionary, or sexy. Rather, they’re a cyclical industry with constantly and rapidly declining prices per data byte, and one long known to be at risk of eventual obsolescence.

That risk started looming large a couple years ago as drives using flash storage, aka solid-state disk (SSD) drives, began to supplant the old-fashioned hard disk drives on PCs. The performance boost was simply too great, while the higher cost remained modest relative to the total price of the machine.

Between early 2015 and right about this time last year, shares of the two leading hard drive makers, Western Digital (WDC) and Seagate (STX), lost roughly two-thirds of their value.

And then a funny thing happened: sales stabilized (albeit at lower levels) as the PC erosion slowed and enterprise demand picked up. Corporate servers and data centers also use hard drives. Solid-state drives’ penetration of this key market has been slowed by their higher cost and the sheer scale of the required data storage.

Over the last year, both stocks have mounted a major comeback. 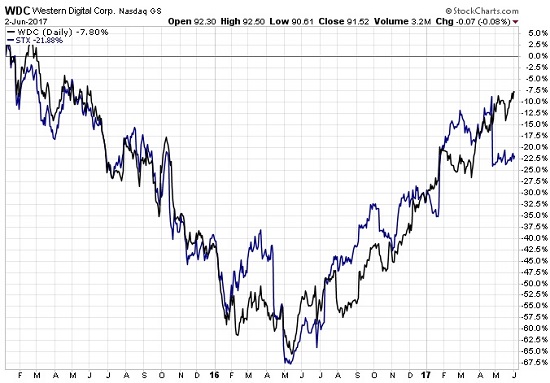 The larger Western Digital is the clear industry leader after its well-timed recent acquisition of flash supplier SanDisk. The deal gave it SanDisk’s half of a flash memory joint venture with Toshiba, and the potential for full control or other inducements since Toshiba is now selling its stake.

Seagate lacks the heavy flash technology investments of Western Digital, but also claims to have greatly limited the potential for further sales erosion by migrating into higher-end applications where solid-state drives aren’t a factor.

The recent divergence in the two stocks’ performance reflects a drubbing inflicted on Seagate in late April, after it offered a mostly in-line earnings report and tepid outlook following several quarters of resounding upside surprises.

But the company continues to be a cash machine, generating almost $1.5 billion in free cash flow over the last year. That’s a 10% free cash flow yield based on $15 billion in enterprise value. A dividend currently yielding 5.8% consumed just over half that excess cash. If Seagate keeps repurchasing stock at the pace of the past six months its effective annual cash return yield (dividends plus share buybacks) will approach 10%.

Of course, there is a chance this is a value trap. A yield this rich financed entirely from free cash flow would simply not be available otherwise. Some investors clearly believe that Seagate’s sales and profits will erode  much more.

Chances are, they’re once again too early in that pessimism.

The company’s recent forecast probably didn’t account fully for the slowdown in flash adoption as a result of recent shortages and resulting price hikes.

Bears are also not properly reckoning with the likely growth of data center volumes as smart sensors, robots, drones and humans upload every readout and action log to the cloud. We’re going to need a lot of hard drives to store all that, because flash simply won’t do. In addition to the still prohibitive cost, it has some other drawbacks, like reliability and durability.

These problems are being solved, are going to get solved. And chances are they’ll be solved by Western Digital and Seagate, which are still satisfying the bulk of the planet’s mushrooming data storage needs.

Western Digital’s dividend yields a more modest 2.2% but consumes less than a quarter of its free cash flow. The company has used the bulk of the recent cash flow to pay down debt.

I expect Western Digital as well as Seagate to be around for many years and to continue to generate reliable dividend streams through the industry’s cyclical ups and downs. WDC is a buy below $103 and STX below $55.

Igor, with such a strong recommendation for Seagate why is it not in the Breakthrough Tech. portfolio?

Edward, I can answer that. Earnings estimates for Seagate (STX) have been revised downward for 2018, mostly due to projected declines in the PC market over the long haul. Seagate has many inherent virtues but we’re not willing to add it to the portfolio due to the secular shift in demand from PCs to cheaper mobile devices, which is hurting STX more than WDC.

Seagate is attempting to diversify its product mix to mitigate these headwinds but it’ll take time. The company’s new investments in leading edge technology (HAMR, 10 and 12 terabyte Helium HDD, etc.) will take longer to show up as healthier top-line growth.

Meanwhile, BTP portfolio holding Western Digital (WDC) is better positioned, with a head start in more advanced technology. Including both Seagate and Western Digital in the portfolio would have been redundant, so we went with the stronger prospect.