Laser-Focused on the Future (Buy IPGP)

A few years ago I whiffed  on a great story and an even better investing opportunity. A bunch of Russian expatriates working practically in my Massachusetts backyard were claiming to have all but reinvented lasers.

Except of course that the stock was volatile, and wasn’t cheap, and soon enough was selling off. Other things came up. IPG Photonics (IPGP) winked off my radar.

Turns out those Russians were on the level. Their upstart laser stock has more than doubled since. Which means that every time I think about IPG Photonics I’m reminded about what might have been. It’s not a good feeling.

But here’s the thing about that feeling: it’s mine, and needn’t be yours. It stems from a well-known cognitive bias that anchors my sense of the “correct” IPGP price to the one I first encountered. Never mind that the company had grown tremendously and profitably thanks to its innovations, or that the manufacturing sector that uses it lasers is booming now, and wasn’t then. I remember when IPGP was at $60, so buying it at $148 seems wrong. Of course, unless a stock has soared in the absence of fundamental growth, where it used to trade will generally have no bearing on its future prospects.

You might argue that the stock needs to consolidate its rapid recent gains. I remember when people were saying that about Nvidia (NVDA) at $100, two months ago.

Why am I risking mean reversion and further  embarrassment  to recommend a stock I should have bought years ago? Because it’s an excellent bet to continue outperforming. And that’s the only thing that really matters.

Right now, IPGP checks many of my favorite boxes. It’s a rapid, profitable and debt-free grower, roughly doubling revenue and operating profit over the last four years. The growth reflects its domination of the most promising laser technology, which uses highly efficient and controllable light pulses traveling along fiber-optic cables to supplant the costlier and less precise lasers traversing gas or crystals.

The lasers are used predominantly in metal fabrication, an industry benefiting from recent improvements in demand for capital goods like cars and planes. But the range of advanced applications in which fiber lasers are making inroads is growing, and IPG Photonics’ recently announced acquisition of a small developer of medical fiber lasers seeks to widen its lead in that promising market. 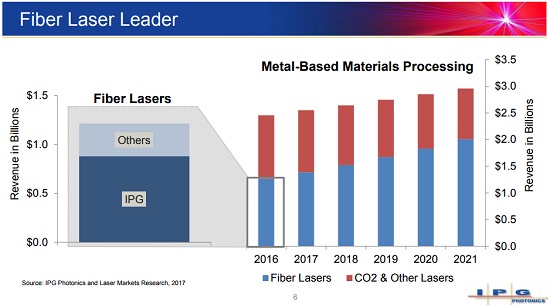 The company recently posted a 55% gross margin and 37% operating margin, on sales set to increase more than 20% this year. The strong growth and resilient margins more than warrant a multiple of 23 times trailing cash flow based on the company’s enterprise value.

IPG Photonics is still led by the 78-year-old scientist who founded it with a few thousand bucks and lots of sweat equity at a Moscow government science lab. So it does face a leadership transition in the not-too-distant future. But top management ranks also feature many of the founder’s longtime colleagues, and the company’ ownership of its vertically integrated supply chain should remain a durable advantage over rivals.

Ultimately, IPG Photonics might prove attractive to a larger industrial conglomerate. But for now it’s firing on all cylinders and belongs in the Breakthrough Tech Profits portfolio. Buy IPGP below $170.

Do you recommend buying options on IPGP ? Any suggestion on how to option this one ?

I bought NVDA at 100 the day you recommended it 😉

A couple of us bought options on IPGD when Jim recommended it over at Systematic Wealth. You can check it out if you want.

Perhapsnot the right place to ask this question but your opinion/suggestion will be appreciated..
In short bought “warrant stocks” where the the due date expired without selling the shares on time..Its unfortunate but that’s exactly what happened…
Now I’d like to know my options here ..? ..i.e talk to the issuer company and try to find some arrangements,or …?
Cheers,

Do you mean you didn’t exercise the warrant before it expired? I hope that’s not the case, because warrants, like other options, have to be exercised within the specified timeframe. Please check with your broker and/or the company as soon as possible regarding your specific situation.

That’s right Igor..! called up the campagny issuer and they said that they can’t do anything about that when the warrant expires and NOT exercised on time.
Thx again Igor for your feedback ..

Excellent, John, congrats — and thanks so much for sharing this.