Kinder Morgan Energy Partners LP (NYSE: KMP) is one of the largest pipeline transportation and energy storage companies in North America. The partnership owns an interest in or operates approximately 46,000 miles of pipelines and 180 terminals, and receives fees for transporting and storing energy products such as natural gas, refined petroleum products, crude oil, ethanol, biodiesel and carbon dioxide.


KMP’s customers include producers, shippers, oil companies and utilities. KMP’s assets connect many of the most important energy-producing regions in the country to some of the densest population centers: 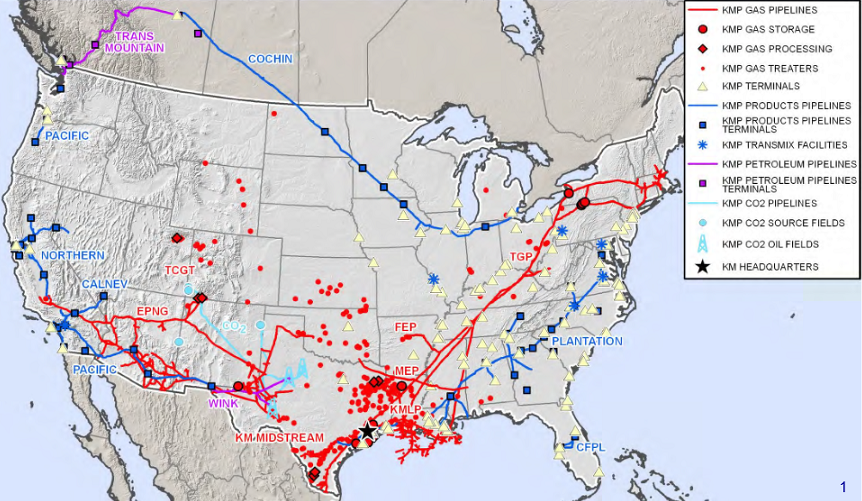 KMP is near the top of the list of Master Limited Partnerships (MLPs) that have performed best over the past 15 years. Between 1997 and the end of 2012 KMP invested more than $30 billion in projects, joint ventures and acquisitions, and delivered an astounding average annual return of 24 percent to unitholders. 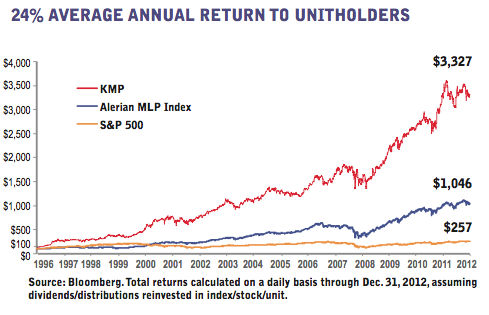 
KMP is well-diversified into five business segments, which made the following contributions to the $4.38 billion the partnership earned in 2012:

From the operations map, it is clear the natural gas infrastructure represents a substantial portion of KMP’s investments. In fact, KMP CEO Richard Kinder has promoted natural gas as the future fuel of choice for the US, noting that the biggest obstacle to wider use is the lack of midstream infrastructure to connect additional natural gas supplies to markets. KMP expects 40 percent of 2013 earnings to come from the Natural Gas Pipelines business segment, and for this percentage to increase in the future.


Note that earnings from this business line were up 44 percent in 2012, a year in which natural gas prices collapsed. The increased earnings were partially the result of acquisitions (the partnership spent $2.1 billion in 2012 on expansions and acquisitions), but those earnings are fee-based and mostly protected from fluctuations in natural gas prices.


As demand for coal in the US has fallen, coal exports have picked up. KMP’s Terminals business has been a beneficiary, its coal export volumes rising 38 percent last year over 2011. KMP also reported good results from its liquids terminals on the Houston Ship Channel and in New York Harbor. This business segment also handles 30 percent of the ethanol used in the country, and saw ethanol volumes increase by 8 percent in 2012.

For 2013, the Terminals business segment expects $839 million in earnings, a 12 percent increase over 2012. KMP is anticipating investing $560 million in 2013 to further grow the Terminals business, which includes money spent toward the $420 million expansion of the Edmonton Terminal in Alberta. KMP also recently announced a $98 million joint venture to build a crude oil rail-loading terminal in Edmonton, Alberta to serve Canada’s oil sands. The Alberta terminal will be served by both Canadian Pacific Railway (NYSE: CP) and Canadian National Railway (NYSE: CNI)


KMP is the largest independent transporter of petroleum products in US with a 2013 budgeted volume of 1.9 MM bpd. Its Products Pipelines business segment earned $703 million in 2012, and KMP expects that to increase to $791 million this year. Growth in transport of refined products is expected to be slow, but the partnership expects growth to be driven by (among other things) the biofuel projects scheduled to come online in the Southeast and on the West Coast.

Products Pipelines is set to spend $520 million this year on projects, including the $220 million Parkway Pipeline, a joint venture with Valero (NYSE: VLO). This pipeline is expected to begin service in September and will transport refined products from Louisiana to Mississippi.


Kinder Morgan Canada makes up a small proportion of the overall portfolio, but earnings rose 15 percent in 2012. A new toll agreement on the Trans Mountain pipeline system that transports crude oil and refined products from Edmonton, Alberta, to terminals and refineries in British Columbia region and the Puget Sound area in Washington helped drive growth in 2012.

KMP expects the Kinder Morgan Canada business segment to deliver earnings of $212 million in 2013, down slightly from 2012. The segment will spend $60 million on expansion projects in 2013, but the major focus is to continue to pursue a $5.4 billion expansion of the Trans Mountain pipeline.

KMP has increased annual distributions every year for more than a decade. In 2012 distributions reached $4.98 per unit, which represented an 8 percent increase over 2011. The 2013 distribution is expected to increase another 6 percent to $5.28 per unit. KMP has met or exceeded distribution guidance in 12 of the past 13 years.

This is an MLP that should be near the top of your wish list to buy on dips.


Kinder Morgan (NYSE: KMI) is a corporation that serves as the general partner of Kinder Morgan Partners as well as another affiliated MLP, El Paso Pipeline Partners LP (NYSE: EPB). Its incentive distribution rights as well as general partner interest recently entitled KMI to 52 percent of the distributions from KMP, and 27 percent of the payout by EPB, percentages set to grow in the future.

Yet despite plans to grow the dividend by 9 percent to 10 percent in each of the next several years KMI shares have retreated alongside affiliated units and the MLP sector as a whole. They were recently down 10 percent from the May peak and consolidating near the 200-day moving average. The yield is up to 4.3 percent, plenty rich given the projected near-double-digit growth rate.


At least one insider agrees. On Aug 8 and Aug. 9, Houston billionaire Sarofim Fayez, a KMI board member and noted energy investor, spent $15 million to purchase shares at an average price of approximately $37.70. It was the latest in a string of insider purchases that started with a $18 million buy by founder Richard Kinder in late June. These are bullish signs. Continue to buy KMI below $42, and note that as a corporation its shares should be held, where possible, in a tax-deferred retirement account.