A Jolt of Reality for Oil Doomers

It Wasn’t for Lack of Demand

In last week’s Energy Letter, I addressed the notion that softening demand is a factor in the current oil price crash. I think it’s worthwhile to once more show that for more than 30 years, global crude oil demand has grown by an average of 1 million bpd each year, and has only fallen twice during that time: 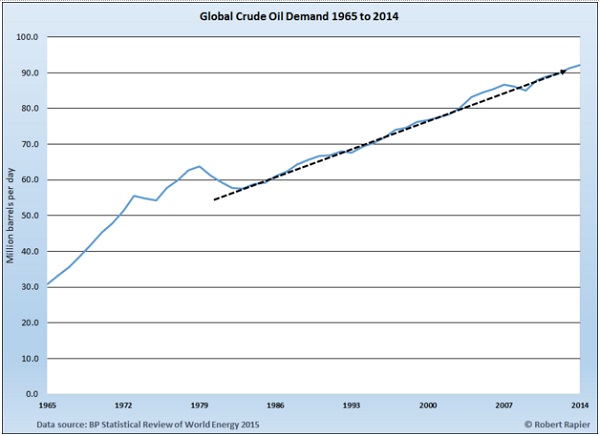 Also last week, Bloomberg reported on its own analysis arguing that, while it was 2 million barrels per day of oversupply that sank crude oil prices, electric vehicles (EVs) could reduce demand by another 2 million bpd as soon as 2023 (Another Oil Crash Is Coming, and There May Be No Recovery). The  argument is that as electric car sales continue to grow, they will decisively and permanently crimp demand for crude.

This analysis overlooks a couple of factors. One is that remarkably steady climb in global crude oil demand. Despite biofuels, conservation, higher fuel standards and carbon emission legislation demand growth has marched on. At its historic rate of increase, by 2023 demand will be 8 million bpd higher than it is now. If electric cars can take 2 million bpd of pressure off of that demand, it would be welcome news, but certainly wouldn’t be enough to crash the oil market (nor to reduce our actual oil consumption).

The primary reason oil prices crashed this time was a rapid increase in supply over a few short years, and then OPEC making matters worse by adding more supply in an effort to drive out competition. Electric cars can’t under any conceivable scenario accomplish that. Bloomberg’s analysis argues that global electric car growth was 60% last year, and then extrapolates that “if that level of growth continues, the crash-triggering benchmark of 2 million barrels of reduced demand could come as early as 2023.” 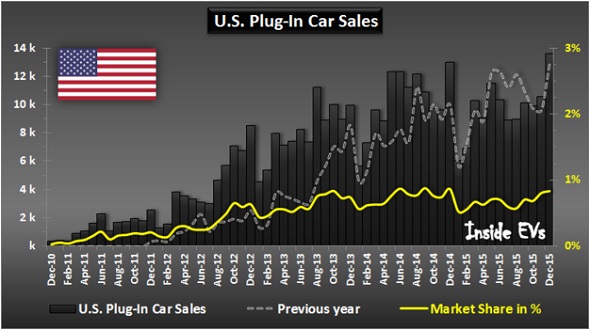 The 116,099 EVs sold in the U.S. in 2015 were a tiny fraction of the 17.5 million in total light-vehicle sales (cars, light-duty trucks, and SUVs). Just the one-year increase in the number of cars sold in the U.S. was around 1 million vehicles, which is 2.5 times the total EV sales over the past five years.

Consider the example of Norway, which has the highest penetration of EVs in the world at around 12.5% of all new cars sold. Norway provides several generous incentives for the purchase and use of EVs, and sales there have skyrocketed. Over the past decade, EV sales rose from 167 in 2005 to 39,632 in 2015 — an increase of more than 200 times.

Even if we look back just over the past five years — the period of the most explosive growth in EV sales in Norway — overall oil consumption rose slightly in Norway (as it did in the U.S.), while it declined by 11% in the EU.

None of this is meant to dismiss the potential of EVs, but I think it’s important to keep things in perspective and expose the Bloomberg analysis for what it is: very wishful thinking. More EVs will certainly be sold between now and 2023, but they’re still going to be a small fraction of all cars sold. And most of those cars are going to run on fuel refined from petroleum.

The Real Cause of the Crash

There are two factors behind the oil price crash that began in mid-2014. The initial cause was that supply growth had outpaced demand growth for several years, swelling global inventories. The spurt in supply growth was caused primarily by U.S. shale oil producers, who since 2008 have added production at the fastest rate in U.S. history: 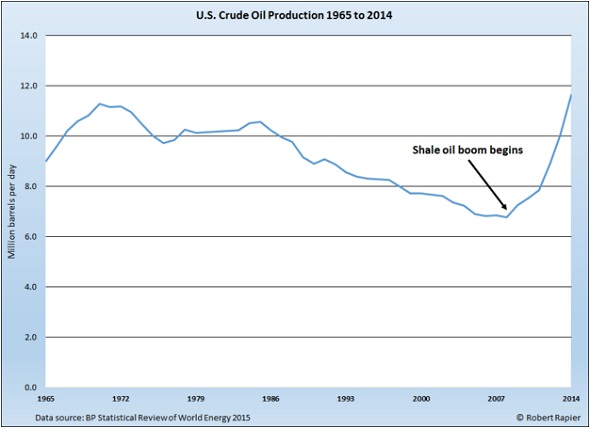 In fact, U.S. producers added more barrels of oil to the market than any other major oil-producing region in the world: 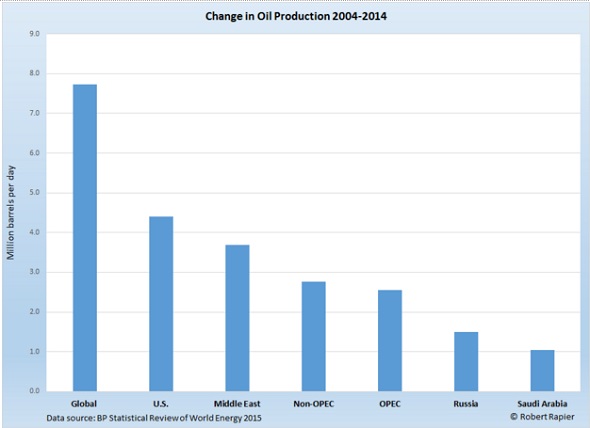 This rapid and unexpected increase in U.S. oil production brought millions of additional barrels of oil into the market daily. These barrels lowered U.S. imports, and also led to higher exports of refined fuels. The imports pushed out of the U.S. had to find a new home, increasing the supply of oil on the global market. Supply growth got ahead of demand growth. That led to rising inventories, and prompted the decline in oil prices in mid-2014.

By the time OPEC met in November 2014, the price of West Texas Intermediate had declined from about $100/bbl to around $75/bbl. Until that point, drilling activity in the U.S. remained strong, but OPEC decided at that meeting that it would defend market share against the new oil supplies coming into the market. After this meeting the oil price decline that had begun in July accelerated, and drilling activity plummeted: 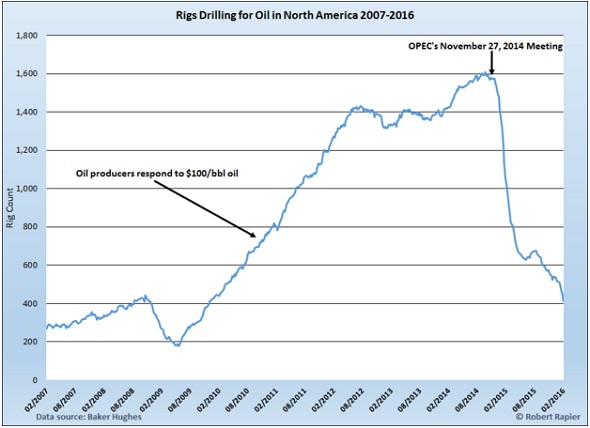 So far the decline in U.S. production has been modest, and OPEC members have increased production by more than a million bpd in an already oversupplied market. This led to rising global crude oil inventories, which has kept downward pressure on crude oil prices and pushed the weaker shale oil producers toward bankruptcy. 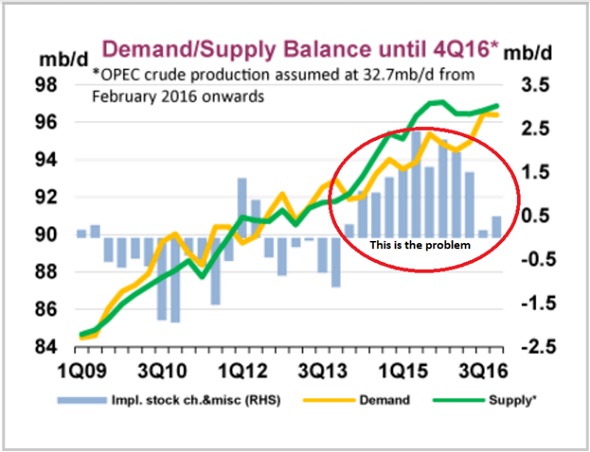 The market remains oversupplied, and will continue to be oversupplied until demand growth catches up, U.S. production substantially declines, or OPEC makes some meaningful cuts to its production. There are signs of movement along all of these fronts, and the U.S, Energy Information Administration forecasts that the excess production will diminish significantly starting in the second half of 2016. 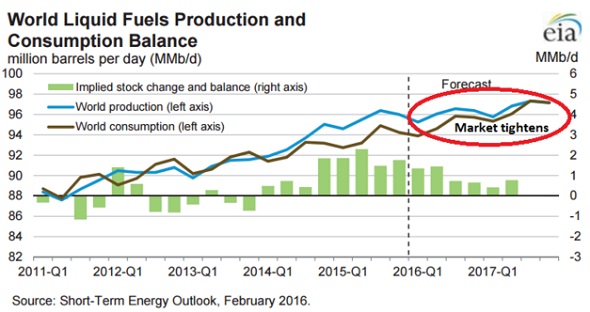 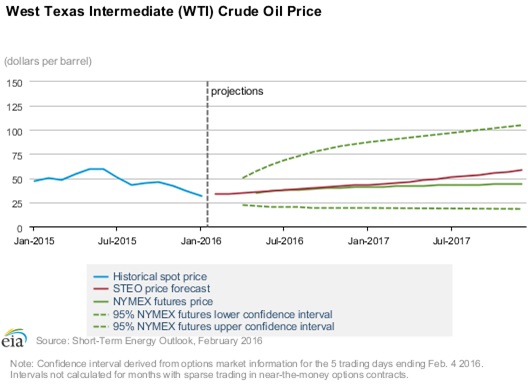 How should an investor play this? Because $40 oil will still place a lot of strain on oil producers, we recommend that you continue to avoid companies that have too much leverage. In fact, we are still extremely cautious on most pure oil and gas producers given the current outlook, but I would be especially leery of Debt/EBITDA ratios above 2.5 or so.

Earnings are now being released at a fast and furious pace, but some of the major oil and gas producers have yet to report. As soon as all of the majors have released their earnings, I will begin updating stock screens based on Q4 and full year 2015 results. We will be especially wary of those companies whose financial health is likely to further deteriorate in the current commodity price environment, as well as those that recorded significant write-downs in their oil and gas reserves for 2015. More importantly, we will highlight those companies in the best position to survive an extended period of lower prices.