Guns or butter? Perhaps a crockpot, a waffle bowl maker or a pack of diapers? Such is the odd range of products National Presto (NYSE: NPK) makes. No doubt this is an eccentric portfolio of products, but like its namesake, Presto is magically producing profits.

Most investors would turn their tail when trying to untangle National Presto’s operating model. The company does not host quarterly conference calls, offers little detail in its SEC filings and has zero analyst coverage. It is the equivalent of a Wall Street hermit.

Yet like the Limoge china cup found beneath the rubble at a yard sale, this stock is overlooked and undervalued. 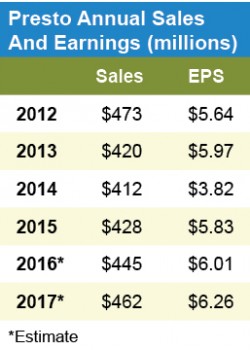 National Presto was founded in 1905 to make industrial-size pressure canners. In the early 1900s pressure canning was thought to be the only safe and reliable method of preserving low-acid foods. A commercial business selling this machinery boomed.

The United States’ entry into World War II in 1941 spurred the company to convert its factories to make artillery. Presto’s experience producing fuses for artillery,aerial bombs and rockets on a mass scale became a valuable asset. Defense made up 77% of profits in 2015, down slightly from 80% of profits in 2014. While defense revenue has been growing in the single digits, profits from this segment have been exploding. Although part of this is due to higher revenue, this growth is also the result of a more profitable product mix.

As part of a 2013 purchase of a small arms manufacturer, Presto agreed to fill that company’s backlogged orders at a predetermined price. This contracted price generated lower than average profits for Presto. As sales from this bucket declined, overall profits swelled. The benefits of this mix change are likely over as Presto has filled much of the backlog. Future profit growth in defense will come from increased revenue.

Bad news for peace is good news for Presto. And bad news reigns as increasingly volatile insurgencies call for more feet on the ground and increased training. Presto provides both training and ammunition. Whatever your political stance, the U.S. Army seems ready and willing to support these efforts that will continue to drive defense revenue.

According to industry source Strategic Defense Intelligence, demand for rockets, artillery, and small-caliber ammunition will become the largest share of defense spending for the next 10 years. Demand for these products, exactly the ones that Presto makes, is expected to grow 4% annually until at least 2025.

One brief glance at National Presto’s website would have even the most adventurous cook scoffing at its boring wares. The Pizzazz Pizza Oven, the Powercrisp Microwave Bacon Cooker and the infamous Salad Shooter are a few of the unusual housewares invented and sold by the company. 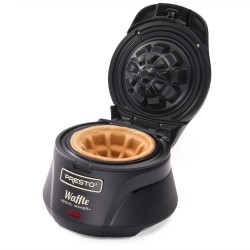 Revenue from the houseware segment is highly seasonal, with roughly 45% of sales occurring in the December quarter. After dropping 8% in 2014, houseware revenue was  up by mid-single digits for the first nine months of the year but dropped 5% in the critical fourth quarter,  leaving it flat for the year However profitability flourished 17% due to a mix of more profitable products.

This in itself would not be bad if the product generated good profits. Unfortunately, the diaper business is highly competitive and generates razor-thin margins.

This segment last produced a measureable profit in 2011. Since then, losses have piled up. Although losses have declined recently, we see little hope. There is hardly any synergy between this business and the rest of the company.

While we don’t believe the absorbent segment will drag down profits tremendously or eat up a lot of cash, it does remain a distraction and offers little benefit to the company.

Outside of the diaper business, National Presto is doing well. Profitability in both the defense and houseware segments has helped the company stockpile an arsenal of cash.

As of its last reporting date in December (for the September quarter), the company had $12.70 per share in cash. A special $3.05 dividend was paid in March. 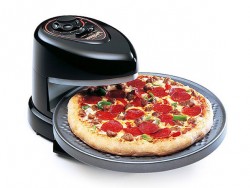 The bulk of the company’s cash flow is made in the December quarter when payments for houseware products are received. Despite cash flow declining in the fourth quarter compared with last year due to a built-in inventory, cash increased to a record $88 million.

National Presto has no debt and claims to have an uninterrupted 70-year history of paying dividends (our Bloomberg database doesn’t go back that far).  The annual dividend equaled $1 per share (1.2% yield).

Although National Presto’s financials aren’t as snazzy as its kitchen products, this cash cow should be able to cook up delicious returns for investors.

A member of our legacy Roadrunner Stocks portfolio, buy National Presto up to $87.