New Medicare rules that will take effect next year will ring up profits at Omega Healthcare Investors (OHI), boosting its dividend, which currently yields nearly 7%.

Starting in 2017, the new rules will allow hospitals to discharge hip and knee replacement patients in less than three days, which had been the required hospital stay. Because the patients will still need more care, they will be sent to skilled-nursing facilities instead, such as those that real estate investment trust Omega owns. 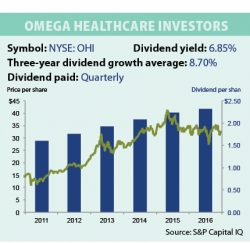 Higher reimbursements to the facilities will lead to higher rent revenues for Omega. Of its 949 properties 854, or 90%, are skilled-nursing facilities, with the rest assisted-living properties.

Plus, Omega will get a much bigger share of the Medicare increases because the REIT continues to add more skilled-nursing facilities. It bought Chicago-based Aviv REIT last year. This $4 billion purchase added 282 properties to Omega’s portfolio. Of those, 236, or 84%, were for skilled-nursing. So far this year Omega has added 34 skilled-nursing and 16 assisted-living facilities for $650 million.

CEO Taylor Pickett said that the company intends to sell 24 facilities, most of which are left over from the Aviv REIT acquisition. The estimated cash from the sale would be over $95 million and the reinvestment of that money would increase rental revenue from the $6.6 million in annual rent currently generated by the facilities.

The aging of the population continues to work in Omega’s favor. Patients aged 85 and older are more likely to require post-hospital care. This will increase Medicare payments to skilled-nursing facilities. Currently, 42% of residents at these facilities are over that age. This age group is expected to increase 6% to 6.7 million by 2020. Management expects the overall number of skilled-nursing facility patients to increase 11% over the next four years largely due to this increase.

Skilled-nursing facilities are low-risk. Thanks to a geographically diversified portfolio of such facilities in 42 states and the United Kingdom, Omega can weather setbacks in a particular region. Because Omega’s skilled-nursing tenants get most of their revenue from Medicare reimbursements, rent payments are dependable.

Diversification is one reason why the company has been able to increase its cash flow steadily. Funds from operations (FFO) is the figure REITS use to define their earnings. Since 2012, Omega’s FFO has increased from $222 million to $429 million in 2015, an average annual growth rate of nearly 25%. The company’s largest competitors in the healthcare REIT industry—HCP, Ventas and Healthcare Realty—are not even posting year-over-year FFO gains, much less at Omega’s rate. For fiscal year 2016 ended in December, Omega maintained February’s FFO guidance of about $616 million, which will be a 44% increase over last year’s FFO.

Omega’s cash flow gives it room to continue increasing its dividend. Of these four companies, Omega is the only one with a decreasing ratio of dividend payout to FFO. The company’s FFO payout ratio, which was 82% in 2012, dropped 3.3 percentage points to 78.7% in 2015. Omega’s ability to keep its FFO payout ratio in the 70% to 80% range indicates that there’s room for dividend growth as a few of its competitors have an FFO payout ratio of nearly 100%.

Omega shares trade at a bargain. The company’s forward price-to-earnings ratio of 16 is substantially lower than the industry average of 31. Investors still seem skeptical about Omega’s share price after it fell 20% last year from $45 in January to $36 by the end of April. However, that decline wasn’t specific to Omega because its competitors’ share prices also fell between 14% and 18% over the same period. At $32.40 per share, the stock trades at a 28% discount to our target price.

Buy Omega Healthcare Investors up to $45.