Why Now: Shipping containers are in tight supply globally. The volume of trade has recovered to an all-time high, but few containers were built in 2009 and 2010. Tal International, a leader in freight container leasing, stands to benefit.

At home in the Washington, DC area and finally recovered from their trip to Las Vegas, Yiannis and Elliott decide to kick off the first Cocktail Stocks meeting at one of Capitol Hill’s most revered steakhouses, The Monocle. The restaurant’s prime location makes it a popular after-work destination for lobbyists and the Hill’s power players.

Arriving first, Elliot grabs a seat at the bar, orders a glass of Catena Malbec and begins sifting through his notes. Twenty minutes later, the glass is empty and Yiannis is nowhere to be found. Time to ring the Grecian Sensation.

Elliott: It’s almost 8 o’clock, did you get lost?

Yiannis: No, just taking in my surroundings. I’m trying to take a picture of the Dept of Energy’s headquarters, but I can’t figure out how to use the camera on my phone.

Elliott: Are you sure your phone even has a camera? Why you refuse to buy a decent smart phone and insist on using that glorified walkie-talkie is beyond me. Perhaps the piece of tape that holds it together is covering the lens. There are only five buttons on the phone–just push them all and hurry up.

Yiannis: Forget it, man. Order a bottle of something good, and I’ll be there in 10 minutes.

Twenty minutes later, an out-of-breath Yiannis arrives at The Monocle and grabs the barstool next to Elliott.

Elliott: Congratulations, you made it to the Monocle alive. What do you want to drink?

Yiannis: You haven’t ordered anything? Let’s celebrate the new website and launch of Cocktail Stocks with some champagne.

The bartender produces a wine list, and Yiannis selects a bottle of the Taittinger Brut la Francaise.

Yiannis: Hey, I wonder if they have any sea stuff to go with this champagne.

Elliott: What are you on about? Do you mean seafood?

The bartender offers Yiannis a bowl of potato chips, which appear to sate the Greek’s hunger. In between handfuls of chips, Elliott and Yiannis toast to the success of Cocktail Stocks.

Yiannis: Now that we have drinks, let’s talk about the next recommendation. Elliott, you said you had an idea?

Elliott: I like TAL International (NYSE: TAL), a firm that leases freight shipping containers. TAL is the fourth-largest container leasing company in the world, with about 1.4 million TEUs of capacity out of a total global market of 29 million TEUs.

Elliott: A metal container that’s 20-feet long, about 8 feet wide and usually 8.5 feet tall. These containers have been standardized for ease of handling, loading and unloading. Dry containers can hold manufactured parts or electronics. Refrigerated versions are used for transporting perishable or frozen items.

Elliott: Spot on. As you know from your work on Global Investment Strategist, most of the big container lines–for example, Maersk Line and Nippon Yusen Kabushiki Kaisha (Japan: 9101)–are based in Asia. These operators are TAL International’s primary customers.

TEU liftings, a key measure of global trade, have increased steadily over the years. Between 1985 and 2008, global container liftings grew at a 9.9 percent annualized pace. In 2009 TEU liftings declined by about 10 percent, or 50 million TEUs. But since then, well, you’ve seen the trade figures.

Yiannis: Yes, trade has bounced back worldwide. Although much is made of trade between the US and Asia, trade within Asia also has grown rapidly.

Elliott: All true. Global TEU liftings hit an all-time high of about 506 million TEUs in 2010. This figure is expected to grow at a roughly 11 percent annualized pace in 2011 and 2012, topping 600 million TEUs next year. In other words, 2009 was a pause; now the freight container industry is playing catch-up.

At this point in Elliott’s lecture, Yiannis overhears a snatch of conversation in Greek. As it turns out, several of The Monocle’s staff members also hail from the birthplace of democracy. Bored with Elliott’s yammering about TEUs, Yiannis assails the restaurant manager in his native tongue and strikes up a conversation.

The restaurant is relatively quiet because Congress isn’t in session. But the bartender and Yiannis’ countryman suggest that the conversation adjourn to The Monocle’s famous dining room, with its classic steakhouse decor and photos of Capitol Hill heavyweights from the past five decades. Founded in the 1960s, the restaurant is a Capitol Hill landmark.

Yiannis and Elliott settle in to one of the dining room’s booths to finish their drinks and hammer out the first Cocktail Stock.

Yiannis: You write about tanker companies and dry-bulk shippers in The Energy Strategist, so you’re aware that leasing rates in those industries have yet to recover. What’s different about TAL International?

Yiannis checks his watch and fidgets in his seat.

The dynamics of each market are completely different. Although lease rates on tankers and dry-bulk carriers remain depressed, lease rates on freight containers are approaching an all-time high.

The market has tightened significantly because the wear and tear of shipment means that about 5 percent of the global container fleet must be retired each year. In other words, a steady stream of new containers is required to keep pace with the growth in global trade. But in 2009 containership operators stopped building new TEUs to account for the slowdown in global trade. Meanwhile, production of new TEUs increased only slightly in 2010. With global trade on the rise, a container shortage has pushed lease rates to an all-time high.

Yiannis: Sounds good to me. But I have an idea of my own. Let’s figure out where we’re going to eat, and I’ll let you in on my pick.

Elliott: With Congress out of session, this is a great place to have a conversation. But I’ve heard enough Greek for the evening. Let’s head over to Charlie Palmer Steak. You talked that restaurant up when we were in Vegas.

Elliott settles the bill with the barman, who shares an inside joke with him. Meanwhile, Yiannis makes sure that the Taittinger is finished. Fifteen minutes later, Yiannis and Elliott arrive at the steakhouse and secure one of the last tables for the evening. The server passes out menus and hands Elliott the wine list. Yiannis mumbles something about getting two sides of frites, while Elliott flips confusedly through the wine list.

Elliott: A few sections are missing from this wine list.

Yiannis: What? Perhaps you tore a few out while you were frantically flipping through it.

Elliott: The section for French and Italian reds. It’s missing.

Yiannis: They only serve US wines here. Remember, we’re in your nation’s capitol. I think it’s a law or something. Didn’t the Patriot Act say that lawmakers couldn’t drink European wine?

Elliott: Whatever. The only wines I recognize on this list are about $300 per bottle. Since you know so much about this country’s beverage laws, you order something.

Yiannis: It’s all Greek to me, man.

Elliott: All right, I’ll get this Regusci Merlot from Napa Valley. The name sounds familiar. Maybe I tasted it at some point? This is why I want to add a virtual wine cellar to the Cocktail Stocks website: I can never remember all the different wines I’ve tried.

[Editor’s Note: A virtual wine cellar is a good suggestion but will take time to implement.]

Elliott orders the wine, and Yiannis selects the seafood platter as a starter.

Yiannis: But the Porterhouse for two is…

Elliott: Not an option. You know I always go for a medium-rare rib eye. Juicy, well-marbled meat is where it’s at.

Yiannis: Middle Eastern markets still trade at depressed valuations because of all the civil unrest and political upheaval over there. I was looking at Market Vectors Gulf States (NYSE: MES) for Global ETF Profits. This exchange-traded fund (ETF) has rebounded a bit but has plenty of headroom.

Elliott: I like where you’re going with this pick. In a recent issue of The Energy Strategist, I wrote that the region’s major oil-producing countries–for example, Kuwait and the United Arab Emirates–won’t suffer from what’s going on in North Africa and elsewhere in the Middle East. In fact, these economies will benefit from higher oil prices.

Yiannis opens his mouth as if to say something, but stops short. The waiter has returned with a massive tower of seafood and the wine. Elliott tastes the wine, grimaces, washes it down with a raw oyster, and waits for the waiter to move out of earshot.

Elliott: This wine selection isn’t my proudest moment. It’s not awful, but it’s not Bordeaux–which shouldn’t be too much to ask for in this sort of restaurant. But the oysters are fabulous.

Yiannis: Save some for me. This lobster is like chewing gum. How much are you paying for this? Ugh, I can’t even wash it down with a decent wine.

Yiannis: Who knows? Perhaps it’s another one of your arcane laws.

Elliott: Uh, you’re aware that Congress doesn’t set the wine list or the prices, right? Just because a restaurant is on Capitol Hill doesn’t mean…

Yiannis: This crab isn’t that good, either. But these oysters deserve a Congressional medal.

Elliott: Write a letter to your Congressman. Anyway, let’s get back to this month’s pick. Shares of TAL International will probably move faster than your ETF because it’s a volatile stock and has more near-term upside. Market Vectors Gulf States is a slower-moving, macro-focused play.

Yiannis: I agree. Let’s do it.

Elliott: Also, shares of TAL International yield more than 5 percent. The dividend is backed by long-term contracts covering three-quarters of its container fleet. Under these deals, TAL generates a reliable cash flow.

Yiannis: Right, let’s do it.

Elliott: At the same time, about 19 percent of the company’s fleet is booked under service leases offer exposure to the current pricing environment.

Elliott: TAL International recently raised almost $200 million that it can use to expand its fleet of containers.

Yiannis: Are you finished yet?

Elliott: Yes, our steaks are here.

The waiter delivers two steaks that have been cooked to perfection. Yiannis gestures for him to put the two sides of fries in front of his place setting. A dish of herb-roasted asparagus rounds out the feast. The conversation hits a lull while Yiannis and Elliott devour their steaks.

Yiannis: The meat is good.

Elliott: I agree. The rib eye is sumptuous and well-marbled. It even made the wine taste better. I wonder if we should have stayed at The Monocle; I liked the staff, and the champagne probably gave us some credibility. Too bad we can’t print that joke the bartender told us.

Yiannis: Next time we’ll see if he has any clean material. 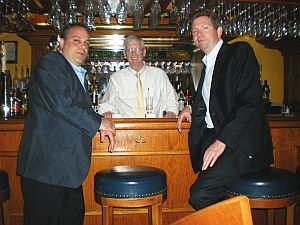 Comment Guidelines
Our Stock Talk section is reserved for productive dialogue pertaining to the content and portfolio recommendations of this service. We reserve the right to remove any comments we feel do not benefit other readers. If you have a personal question about your subscription or need technical help, please contact our customer service team. If you have any success stories to share with our analysts, they’re always happy to hear them. Note that we may use your kind words in our promotional materials. Thank you.