The seeds of California’s gasoline crisis were sown many years ago and will take a long time to resolve. That means investors can take advantage of opportunities to profit.

Several factors helped to cause the crisis: California’s gasoline specifications, which are more restrictive than those in the rest of the US; the changeover to winter gasoline, which reduces gasoline inventories at this time of year; and unexpected refinery problems, which have constricted supply.

California has an extremely tight balance between supply and demand because refineries in most surrounding states do not meet California’s restrictive environmental specifications. So when there are problems with California refineries, the reduced supply can result in sharply higher prices.

This year, the timing of these refinery problems made matters worse. California was scheduled to completely convert to the less costly winter gasoline blend by October 31st. At this time of year, refiners sell off their summer gasoline inventory because they can no longer sell it past the transition date. (The cheaper winter blend isn’t used in the summer, because it evaporates and causes smog in warmer weather.) So inventories are pulled down every October. Combine low inventories with the reduced supplies and spiking prices result.

Gasoline prices eased after California Governor Jerry Brown ordered an immediate transition to winter gasoline. Winter gasoline is cheaper to produce, and the components are available in greater supply. But the underlying issues that led to the crisis are unresolved.

There are no easy solutions to California’s gasoline supply/price problems. Gasoline prices in California spike frequently. Over time these spikes have reached higher and higher levels, leading to the recent record highs (See Figure 1). Easing the specifications might increase supplies and bring California gasoline prices in line with the rest of the US, but this might also worsen California’s air quality. Nobody is going to build a new refinery in California; it is even difficult for current refineries there to gain permits to increase capacity. So volatile prices are likely to continue—and some companies stand to benefit. 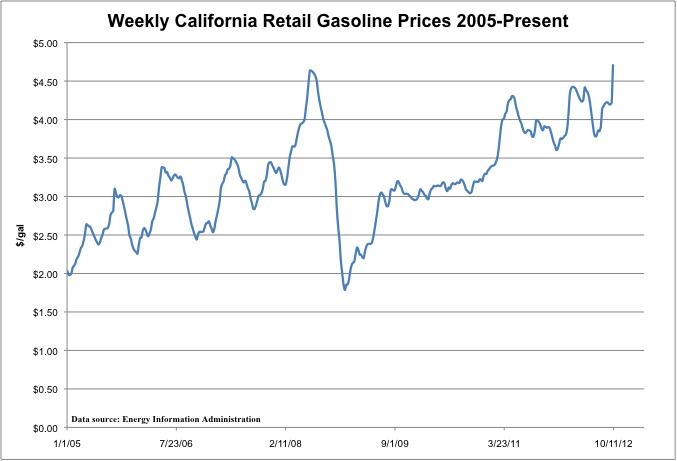 A reporter asked me this week where the money from the price spikes is going. I said, “Into the coffers of the refiners in the state that have been able to maintain high utilization through this price spike.” California refiners will be the most immediate beneficiaries of the current crisis, and include refiners like Valero Energy (NYSE: VLO), Tesoro (NYSE: TSO), Phillips 66 (NYSE: PSX), and Alon USA (NYSE: ALJ), as well as integrated oil companies like BP (NYSE: BP) and Royal Dutch Shell (NYSE: RDSA).

Oil refining is not a consistently profitable business, although there are years in which gasoline shortages have substantially increased profit margins. Because California’s gasoline markets are more isolated and therefore less subject to competition from outside the state, California refiners usually enjoy higher profit margins than in the rest of the US. So investors looking to add a refiner to their portfolio could benefit from adding one with significant California operations.

Valero and Tesoro are my favorite refiner stocks now. Valero is North America’s largest refiner, with a major presence in the Gulf Coast as well as California. Nearly a pure play on refining, which accounted for more than 80 percent of its revenue in 2011, Valero has strong and rising cash flow and is making strategic capital investments that will help boost its margins. I reaffirm Valero Energy as a Buy in the Energy Watch List.

Tesoro, another of the North American major refiners, is a more aggressive pure play on California refiners than Valero, especially as it is selling its Hawaii refinery and purchasing BP’s southern California refinery operations for $2.5 billion. I am changing our rating on Tesoro to Buy in the Energy Watch List.

The crisis will also accelerate efforts to create alternatives to gasoline. Companies involved in building out natural gas infrastructure, building natural gas vehicles or converting vehicles to run on natural gas, and selling compressed natural gas (CNG) vehicles should gain traction. This theme will be explored in depth in the next issue.

In fact, Honda is reporting record sales of their CNG Civic, presently the only natural gas powered sedan available from the factory. The company is even throwing in a $3,000 debit card for buying natural gas as a further incentive. However, this will remain a small part of Honda’s earnings in the near term, and the best bet for investors is to focus on companies whose core business involves CNG.

Additional beneficiaries of the crisis could be select biofuel producers, and companies that make hybrid and fully electric cars. We’ll take a closer look at some of these companies in upcoming issues of TES.

Note that one of the casualties of the crisis will be Chevron’s (NYSE:CVX) 3rd quarter earnings, due to the loss of refining capacity that helped spark this situation. Chevron has warned that quarterly earnings would be “substantially lower” than the previous quarter, in part due to the outage at their Richmond, Calif., refinery. This outage is projected to last through at least year-end, and so will likely impact upon Chevron’s 4th quarter earnings as well. However, Chevron’s fundamentals remain strong, so if the California refining situation lowers Chevron’s share price below our $105 target price, use the dip as an opportunity to Buy.

Disclosure: I have legacy shares of PSX in my 401(k) from when I was employed with ConocoPhillips.