Why I Am Long-Term Bullish on Oil

There are a couple of reasons I am extremely bullish on oil over the long-term. One is that despite much hype to the contrary, there is no scalable, economically viable replacement for oil on the horizon. Oil rose to prominence as the world’s dominant transportation fuel for three key reasons: cost, convenience and abundance. No alternative fulfills all three criteria, although some fulfill one or two of them. Oil presently makes up a third of the global energy mix (See “Global Energy Mix”) and is without a doubt the most irreplaceable component. 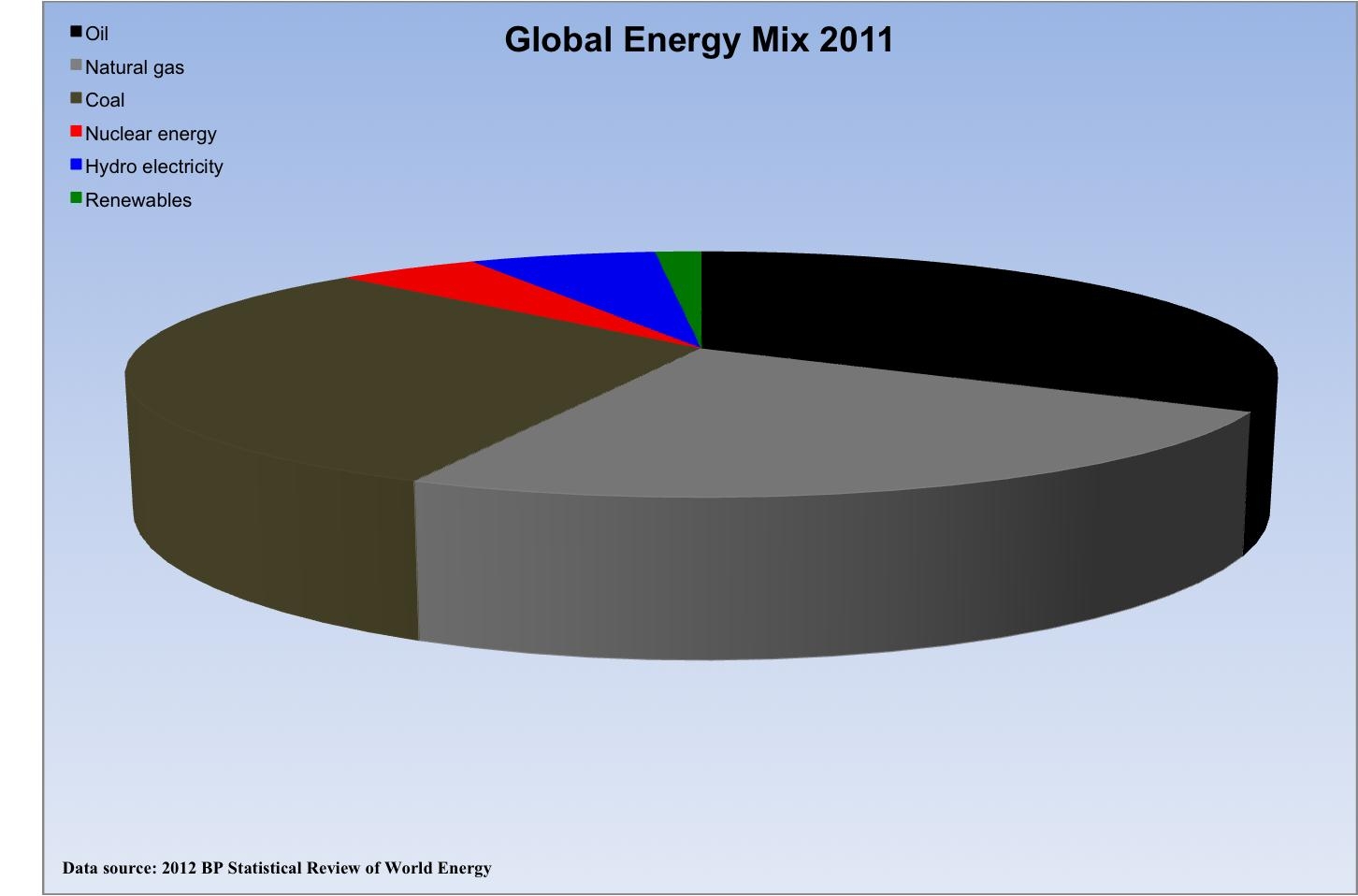 Consider that in Europe, consumers pay the equivalent of $300 to $400 a barrel for fuel as a result of taxes, but they continue to drive. In many countries, alternatives receive preferential tax treatment, but even at an oil price of greater than $300/bbl, alternatives have failed to displace oil as the dominant transportation fuel.

Another reason to be long-term bullish on oil is that global demand grew even as oil prices exceeded $100/bbl. Demand for oil in developed countries has fallen as prices have climbed, prompting some US consumers and politicians to wonder why there has been little price relief as a result. The answer is simple: oil is a global commodity, and the increase in demand in developing countries was far greater than the demand decline in developed countries.

This is different from the situation with natural gas, which is presently much more of a captive market. Increased supplies of domestic natural gas have indeed depressed prices, and they are likely to keep natural gas price spikes in check.

The trend in recent years is clear: As oil prices increased, developed countries reduced oil consumption, but regions that were significantly undeveloped or developing increased oil consumption (See “Changes in Oil Consumption 2000-2010). Since their revenues would have increased over this time period, oil-exporting regions unsurprisingly experienced the greatest percentage increases in consumption. The Middle East and Venezuela both saw consumption increases of over 20 percent. 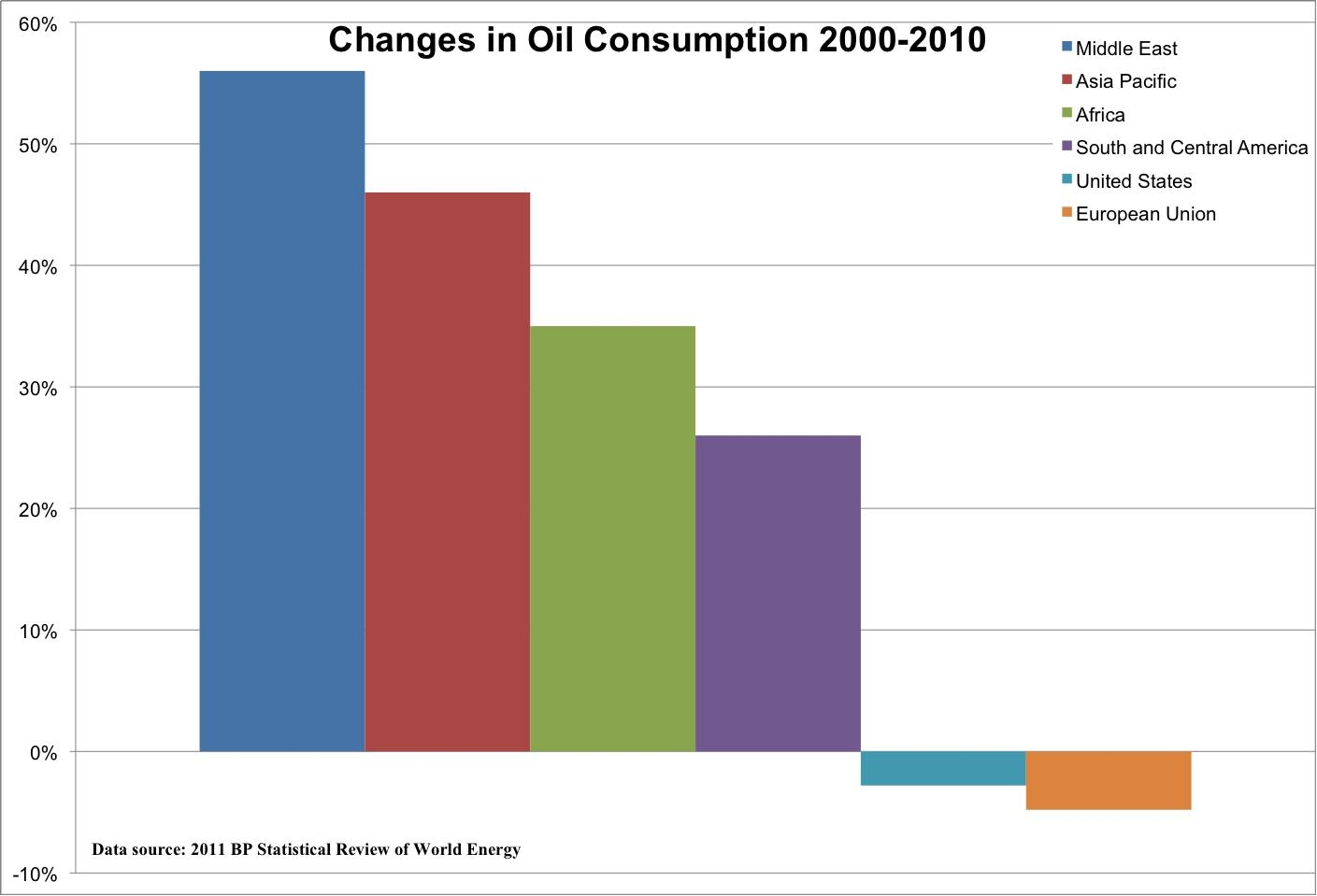 But why would developing oil-importing regions have also experienced consumption growth in the case of high prices? And will this trend continue?

Demand growth in developing countries in the face of $100/bbl oil may at first seem counterintuitive. I have heard some suggest that rich countries will outbid poorer countries for oil as prices increase. But consider consumption patterns in developed countries. Developed countries have more discretionary consumption. In the US, we consume more than 20 barrels of oil per capita. Those barrels might allow us to drive 12,000 miles a year. So when oil prices rise, we make a few changes to our lifestyle—driving fewer miles, buying more fuel-efficient cars, using more mass transportation, etc.—and per capita oil consumption falls.

But the first barrel that someone in a developing country consumes might allow them to drive that very first mile or have light or heat in their home for the first time. They will be willing to pay a lot more for those initial barrels than we are for our excess barrels, and this explains why their consumption has increased even as oil prices have risen. And it also explains why prices remain stubbornly high despite the decline in demand in the US and in Europe.

Thus, the bottom line is not to be fooled about the direction of the oil markets on the basis of Western consumption habits. Future oil prices will be dictated by developing countries, and demand there shows no signs of abating. Growth may slow, but I expect production is going to have a hard time staying ahead of demand. This is a recipe for higher oil prices, occasionally spiking higher any time a world crisis threatens significant supplies.

What might this signal for future oil prices? Based on the European example, in which alternatives haven’t taken over at effectively $300+ oil, and the fact that the oil markets are global, it simply depends on how much value people in developing countries place on increasing their oil consumption from one to two or three barrels of oil per year. An alternative way to think about it is, “If you were only allocated three barrels of oil per year, how much would you be willing to pay for those barrels?” The answer to that is “A lot more than you are paying now.”

It certainly won’t be a straight climb from $100 oil to $300 oil, and we may not reach that level in the US until the next decade. But before you dismiss the idea as preposterous, remember that the average price for West Texas Intermediate (WTI) is hovering around four times its cost 10 years ago.

In the short term, I expect that WTI will continue to trade in a range of perhaps dipping as low as $70 on occasion to a maximum of maybe $120. But when oil prices do break out, the new range is far more likely to be to the up side, with the ultimate potential to go much higher than current prices.

There are several companies in the portfolios that will continue to benefit from high oil prices. The most direct beneficiaries will be companies in which oil production is their primary business. Portfolio companies include EOG Resources (NYSE: EOG), Linn Energy LLC (NSDQ: LINE) and Mid-Con Energy Partners LP (NSDQ: MCEP). I recommend buying EOG Resources below 125, Linn Energy on dips below 40 and Mid-Con Energy Partners below 26.50.

Other companies that will benefit from higher oil prices, but who also have significant operations that may not benefit as strongly due to their exposure to the refining sector are the integrated oil companies. Portfolio holdings in this category include Chevron (NYSE: CVX), Eni (Milan: ENI, NYSE: E), Total (NYSE: TOT), and Petrobras A Shares (NYSE: PBR A). See the previous article for my recommendation on Chevron. I recommend buying Eni below 52, Total below 57 and Petrobras below 37.

Disclosure: I am long Petrobras A shares.