As I mentioned in my introductory TEL, my views on renewable energy companies are mostly negative. This is especially true of 2nd generation biofuel companies that have had initial public offerings over the past few years, like Gevo (NASDAQ: GEVO), Solazyme (NASDAQ: SZYM), Amyris (NASDAQ: AMRS), and KiOR (NASDAQ: KIOR). Most of the publicly traded companies in this sector have seen their market capitalizations obliterated over the past two years, with some falling more than 90 percent from their highs.

I believe that more than 90% of the companies in the 2nd generation biofuel space will ultimately fail due to unrealistic business models. So investors must exercise caution in this area. However, enormous amounts of money continue to flow into the renewable sector (See “Global Investment in Renewable Energy 2004-2011”), and there will undoubtedly be some successes. Where might those be? 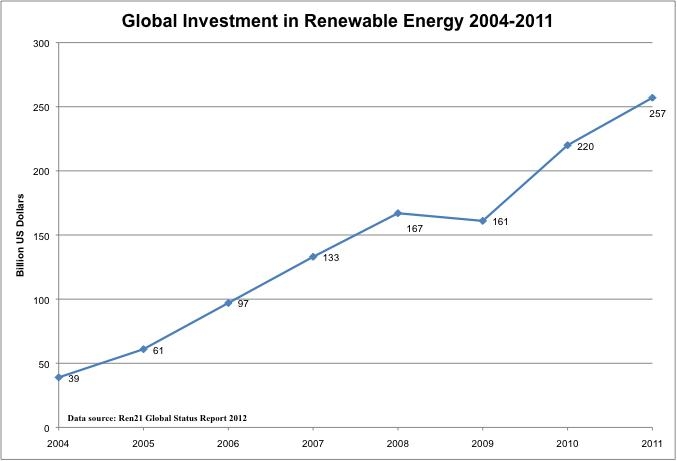 There are two categories of biofuel that can generally compete head-to-head with oil prices in the $80-and-higher range and without government subsidies and/or mandates. One of those categories is palm oil, and is represented in the Biofuel Portfolio of our Field Bets portfolios. The other is sugarcane ethanol, which has not been competitive recently due to high sugar prices.

The oil palm is a prolific producer of oil. The oil is usually used for cooking, but it can be used for fuel. The oil palm, which thrives in the tropics, is capable of producing upwards of 500 gallons of oil per acre per year. To my knowledge, no other oil crop consistently demonstrates these sorts of yields (although algae could theoretically produce more). Palm oil is a major source of revenue in countries like Malaysia, where earnings from palm oil exports exceed earnings from petroleum products.

Over the past five years, Malaysia Palm Oil Futures have traded as low as $1.50/gallon up to over $4/gallon. The current futures price is just under $3/gal (just slightly higher than Brent crude) and tracks roughly with crude oil.

Signs of the palm oil industry were everywhere in Sarawak, a Malaysian state that I visited in 2010. African oil palms grow everywhere: in plantations, on the side of the road, outside people’s houses. You see tanker trucks running up and down the roads filled with palm oil, much as you might see them filled with gasoline on US highways. The port in Bintulu, Malaysia, has a tank farm and other facilities devoted to palm oil exports.

Palm oil can be used unmodified in a diesel engine, although some precautions are in order (and I don’t recommend experimenting!). It can also be processed to biodiesel, or hydrocracked to green diesel. The extra processing will generally make the final product somewhat more expensive than petroleum, but demand has still been strong due to biofuel mandates.

Anglo-Eastern Plantations is a U.K.-based holding company engaged in the cultivation of oil palm and rubber in Indonesia and Malaysia. The company’s business is primarily oil palm. At year-end 2011 they had over 56,000 hectares planted in oil palm. In 2011 the company reported pretax profit of $109 million on revenues of $259 million.

MP Evans is also a U.K.-based holding company with interests that include oil palm and rubber plantations in Indonesia, beef-cattle operations in Australia, and property development and an oil palm plantation in Malaysia. The stated intention of the company’s board is “to develop and plant approximately 3,000 hectares per annum of environmentally sustainable oil palm” and to maintain the company’s assets at 70% in Indonesian oil palm plantations and 30% in Australian beef cattle.

Sipef is a Belgium-based agro-industrial company. The holds interests in palm oil, which comprised 78% of total revenues in 2011, as well as rubber, tropical fruits and plants, and tea. Company interests also include an insurance business that originated from the company’s involvement in commodities and their shipping.

I would be remiss not to at least mention the environmental concerns over the use of palm oil. Expansion of oil palm cultivation has resulted in the clearing of rainforest and draining of peat bogs. Destruction of peat land in Indonesia for palm oil plantations has caused the country to become the world’s third highest emitter of greenhouse gases. As a result, the Round Table on Sustainable Palm Oil (RSPO) was created to certify that specific companies are producing palm oil in an environmentally responsible manner. Anglo-Eastern Plantations, MP Evans, Sipef, and Neste Oil are all listed as members of RSPO.

However, it is not my intent to make moral judgments about the businesses of the companies in the various portfolios. I seek to analyze them for their ability to profit, and I leave the social aspect of investing to the individual investor. Anglo-Eastern Plantations, MP Evans, and Sipef all remain “Buys” for aggressive investors looking for plays on palm oil.