Editor’s Note: Our own Robert Rapier will be featured in a History Channel program, “What’s the Earth Worth?”, airing on Thursday, Oct. 25, at 9pm ET/PT.

Also, be sure to check out Robert’s most recent video on our website, in which he answers a reader question about production in the Bakken Formation.

Natural gas production in the US goes through the same kind of cycle that the oil industry has experienced for decades. Demand first grows faster than new supplies come online. Prices rise as a result, and companies increase investments into more production capacity and new exploration and production technologies. After the lag time that is required for new projects to come online, supplies then climb faster than demand grows, and prices crash. Low prices spur demand, and the cycle begins again.

These cycles may soon be at an end for the oil industry, as growing global demand has prevented a glut even as supplies continue to expand. But a growing oil capacity cushion over the next one to two years appears likely, and oil prices are likely to soften (but not collapse).

The natural gas industry, on the other hand, will likely go through a few more cycles — primarily because US production is much less influenced by global demand.

During the past decade natural gas prices reached record highs, and there were many predictions of natural gas shortages in the US. Oil companies began to add to their natural gas reserves by acquiring natural gas companies. ConocoPhillips (NYSE: COP) bought Burlington Resources. ExxonMobil bought XTO Energy Inc. Money poured in from investors, and companies like Chesapeake Energy (NYSE: CHK) invested huge sums into drilling for natural gas — including in formerly inaccessible reservoirs that new technologies, such as hydraulic fracturing, now allow producers to access.

When oil and natural gas prices plummeted in the second half of 2008, rig counts for both fell sharply as well. But following the plunge, the price of oil quickly regained its strength, while the price of natural gas in the US remained depressed. 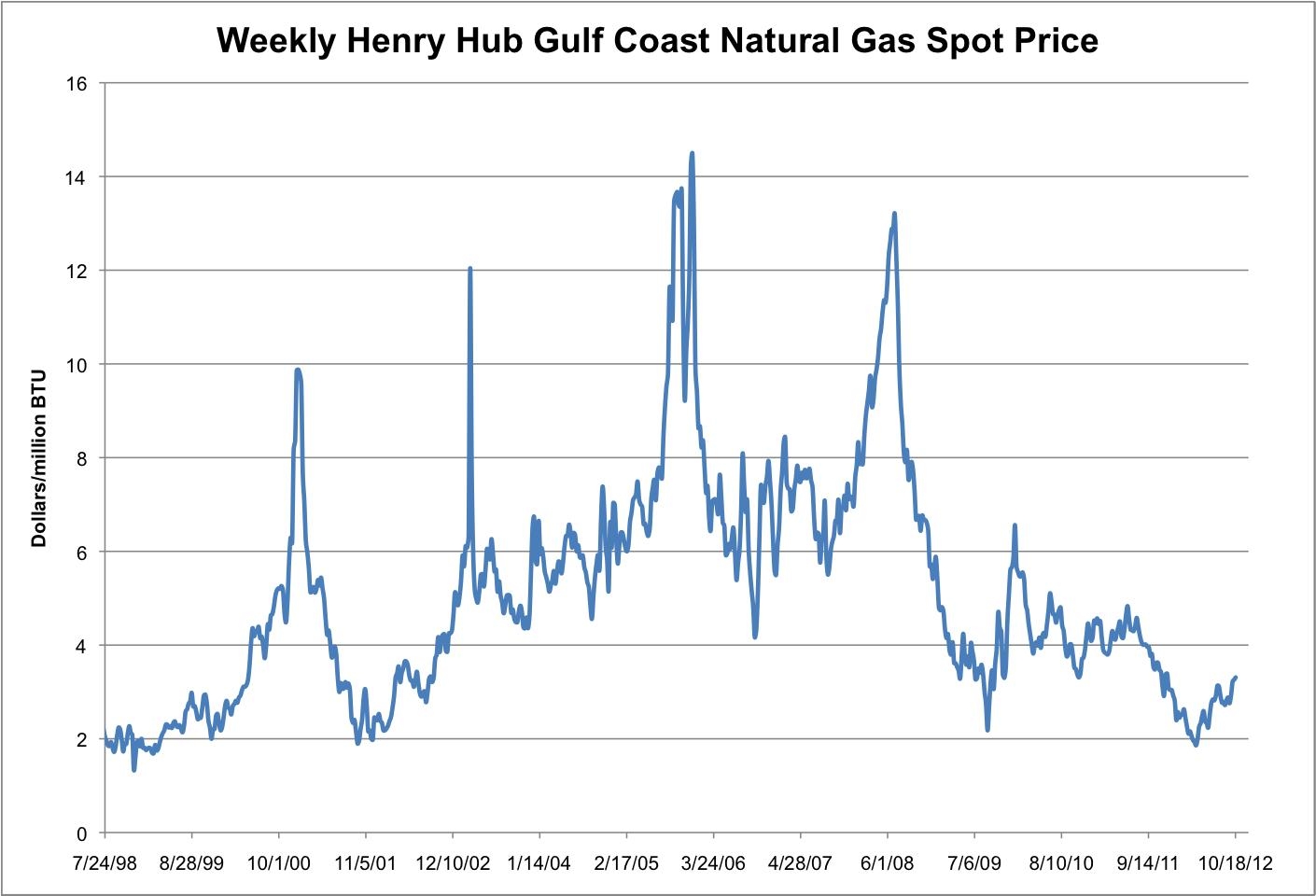 During the first quarter of 2012, the price of West Texas Intermediate was above $100/bbl — nearly triple the price at the bottom of the correction in late 2008. Over the same period, the wellhead price for natural gas was less than half the value it was at the end of 2008. As a result, the natural gas rig count steadily declined, as many of these rigs were shifted into the more profitable business of drilling for oil. And even though natural gas prices have rebounded by 60 percent in recent months, the natural gas rig count continues to fall.

The natural gas cycle appears to have bottomed out last winter. Natural gas prices should continue to strengthen for several reasons. Demand will increase as fleets convert to natural gas. For fleet owners, the economics of switching to natural gas are very attractive, even if natural gas prices were projected climb to $7 per million BTU (MMBTU). I will discuss some of the opportunities resulting from these conversions in The Energy Strategist next week.

At current prices, a barrel of oil would have to be priced around $20 to be as cheap on an energy equivalent basis as natural gas. Oil is unlikely to ever be sustained at $20/bbl again, and natural gas is likely to be a cheaper energy option than oil for years to come.

Demand for natural gas will also continue to increase as utilities switch from coal to natural gas as a cleaner and more economical option for producing electricity. The trend has been driven not only by very low natural gas prices, but by the threat of more restrictive regulations on coal-fired power. The switch is happening remarkably fast. In 2008 natural gas was used to produce 20 percent of America’s electricity, but this year the natural gas share will reach 30 percent.

The natural gas market in the US is distinct from the oil market because natural gas does not have good access to the world market. As a result, there is great disparity in natural gas prices around the world. Construction of liquefied natural gas (LNG) facilities could potentially greatly increase demand for US natural gas, and prices would then begin to rise to levels more reflective of the world market.

Ambitious LNG export facilities are now in the works — for example, Cheniere Energy’s (AMEX: LNG) Master Limited Partnership, Cheniere Energy Partners (AMEX: CQP), is planning on a 2015 start-up for an expansion of their Sabine Pass LNG facility that will include the capacity for natural gas liquefaction and therefore export.

Natural gas demand will increase slowly, but will likely continue to grow throughout this decade. The demand increase will benefit long-suffering natural gas producers, as well as energy service providers with substantial exposure to natural gas drilling in the US.

During last Wednesday’s live chat, there was a tremendous amount of interest in companies in the energy services sector. Several of the biggest companies in this sector reported earnings this past week, including portfolio holdings Schlumberger (NYSE: SLB) and Baker Hughes (NYSE: BHI). Schlumberger had a decent quarter, slightly beating analyst estimates; we will provide our regular breakdown of Schlumberger’s quarterly earnings report in the next issue of The Energy Strategist. Buy Schlumberger under 100.

A number of subscribers asked about international oilfield services company Weatherford International (NYS: WFT). Weatherford has been one of the poorer performers among the oilfield services companies, in part due to the global economic slowdown of recent years and in part because investor confidence was shaken when the company announced that they would need to restate their financial statements for several prior years. Weatherford is a solid company with an admirable diversified portfolio, and it will likely bounce back in the coming years. But after closely examining the company’s financials, we believe better opportunities lie elsewhere at present. Sell Weatherford International.