The Market Renews Its Ascent

A little over a month ago, we expressed the view that the market’s rally would likely continue longer than most investors were expecting. (See “A Rally with Room to Run.”) The recent sell-off hardly diminished our bullishness, even though it caused latecomers to the rally to bail on their positions while providing new fodder for perma-bears.

With regard to foreign and emerging markets, we expect an additional 10 percent rise from their current levels. As the chart below demonstrates, the MSCI Emerging Markets Index has sufficient momentum to head higher. 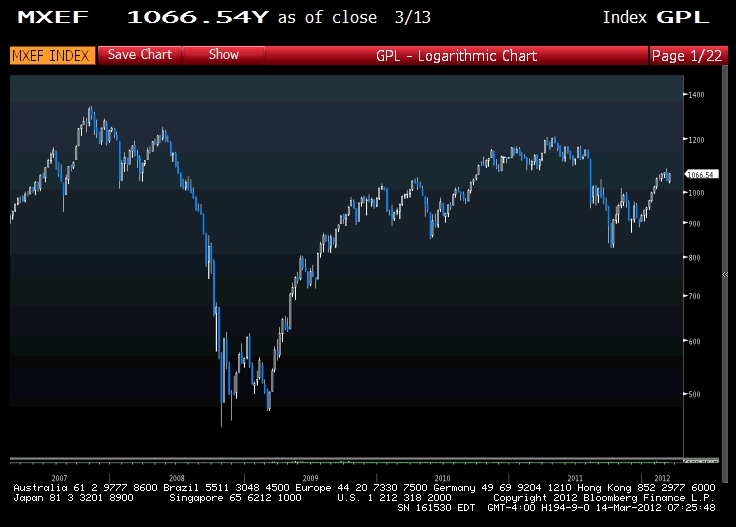 The notion that the market should suffer a violent correction simply because of the pace of its recent gains seems like a frivolous perspective rather than a serious analysis. Market rallies (and downturns) can persist far longer than most might deem rational.

In this case, however, the rally continues to be underpinned by strong fundamentals. Inflation in the fast-growing economies remains relatively low and certainly nowhere near the alarming levels of 2011. And global economic growth is still holding its own, even with the Eurozone in its weakened condition. Beyond that, central banks are doing their outmost to support growth–even Norway’s central back cut rates recently.

In the US, the housing bust continues to weigh on a full economic recovery. However, the Federal Reserve continues to pursue a loose monetary policy, with its purchase of mortgage-backed securities (MBS) likely to yield the most positive effect. If the Fed undertakes a third round of so-called “quantitative easing” later this year, then the US economy will be able to perform better in 2012 than even the most optimistic among us would dare to currently contemplate.

Our best guess as to when this action could take place is after the summer, around the time of the central bank’s annual symposium in Jackson Hole, Wyoming. Such an event will mark the third, and probably final, quantitative easing effort by the Fed.

Since late last year, we’ve noted that global markets had priced in a lot of bad news, including the possibility of a global recession. As a result, we adopted a more aggressive posture for our recommended allocations for 2012.

Thankfully, the market has obliged with a rally led by high-beta stocks. However, market leadership could soon change as investors start looking for the next reason to push equities higher. We believe the next leg up will be sparked by an upward revision in earnings across the board, particularly among Asian companies.

A cursory look at a Bloomberg terminal will quickly show that analysts have been busy raising earnings expectations this year. Although these ratings upgrades have not been undertaken as vigorously as the round of earlier downgrades, the shift is obvious.

Brazil, Russia, India and even the US have seen a wave of upgrades in recent weeks. In our sphere of the emerging markets, Chinese banks, Asian technology companies and industrials have been some of sectors that have enjoyed earnings upgrades.

Overall, Asia remains our favorite region to deploy capital. Asia is the fastest growing emerging market region and has the lowest levels of aggregate inflation. Furthermore, Asian economies have generally manageable fiscal and current account deficits, and many of them even boast surpluses.

As we mentioned earlier, global central banks have supported economic growth through their recent efforts at monetary easing. And Asian companies have produced strong earnings growth, while their shares still trade at attractive valuations. If the global economy continues to improve while inflation remains subdued, then Asian equities will be in the sweet spot for further gains.

In reviewing our Long-Term Holdings Portfolio, our favorite markets in order of preference are China, South Korea, Russia, Brazil and Indonesia. And our favorite sectors are banking, energy, and telecoms for their dividend yield.

Of course, investors should take a holistic view our Portfolio rather than just seeing it as a random assortment of stocks. On that basis, the next five stocks worthy of new money are Taiwan Semiconductor (NYSE: TSM), SHKP (HK: 16, OTC: SUHJY), Fast Retailing (Japan: 9983, OTC: FRCOY), Dr. Reddy’s Laboratories (NYSE: RDY), and Keppel Corp (OTC: KPELY).

We suggest that investors buy shares that trade in local markets whenever possible, especially for recommendations that do not trade on the major US exchanges.